Corn acreage will decline by 4 million acres even though corn prices will increase slightly to an average of $3.50 per bushel, up about 3% from the 2016-17 marketing year.

Soybeans will see an average price of $9.60 per bushel for the 2017-18 marketing year, up roughly 1.1% from the current marketing year. Still, soybean acres will gain on corn because the price ratio for soybeans is projected at 2.6 times that of corn, based on the February futures prices. If the numbers hold through the rest of the month, they will be the most favorable price spread between soybeans and corn since 1997, Johansson said.

At 88 million acres, soybean planting will be 5.5% higher than 2016 and will ensure another record acreage for the soybean crop this year.

Wheat acres are projected to fall to 46 million acres, down 8.3% from last year. All-wheat acres are continuing to decline, which will help boost the average wheat price, projected at $4.30 per bushel, up 12% from the current marketing year.

With lower acres of corn, wheat, rice and other feed grains, overall total acres for the eight major commodity crops are projected at 249.8 million acres, down 1.4% from the 2016-17 marketing year.

"Grain prices showed no obvious response to the release of USDA’s estimates for several good reasons," said DTN Analyst Todd Hultman. "The estimates were already in line with widespread expectations and carry little market weight this early in the new season when all important variables are still unknown."

Cotton, however, is projected to see a 1.4-million-acre increase in planting to 11.5 million acres this year, a 14% increase. If realized, this would be the highest cotton planting since 2012 as returns to farmers are rebounding for the crop. Yet, due to higher production, USDA also forecasts cotton prices would dip 4 cents a pound to 65 cents a pound for 2017.

Looking at exports, USDA projects ag exports to be $136 billion for fiscal-year 2017, up $6 billion from fiscal-year 2016. Exports are expected to rise for grains, soybeans and cotton. USDA noted the department expects exports to China will rebound to hit $22.3 billion, up more than $3 billion from 2016. China will again become the top market for U.S. ag exports, topping Canada and Mexico. Combined, those three countries will make up roughly 45% of all U.S. ag exports.

Despite growing farm productivity and increased exports, Johansson noted net farm income in 2017 is projected at $62.3 billion, down from $68.3 billion in 2016. Baseline farm income projections also are expected to remain flat at this point. Farm income is down almost 30% since 2013 and real farm income has fallen more quickly than any time since the 1970s.

Looking at livestock and dairy, USDA also is forecasting record total meat and dairy production. Even though prices fell for livestock, poultry and milk in 2016, USDA cited lower feed costs and better forage conditions for poultry and livestock expansion this year. Meat exports are also expected to increase in 2017, largely based on higher volume. Still, meat exports will be challenged due to a higher dollar and the continued ban on U.S. products by Russia.

Beef production is expected to increase due to those lower feed prices, yet the average fed steer price is expected to decline about 7% in 2017 to an average of $112 per hundredweight.

Dairy prices are expected to rise nearly 11% in 2017 to just over $18 per hundredweight. Prices will rise despite larger production due to an expected boost in exports.

Editor's Note: USDA will release more detailed reports on projected production for crops and livestock on Friday. Watch DTN Ag News for more stories and analysis on the numbers. 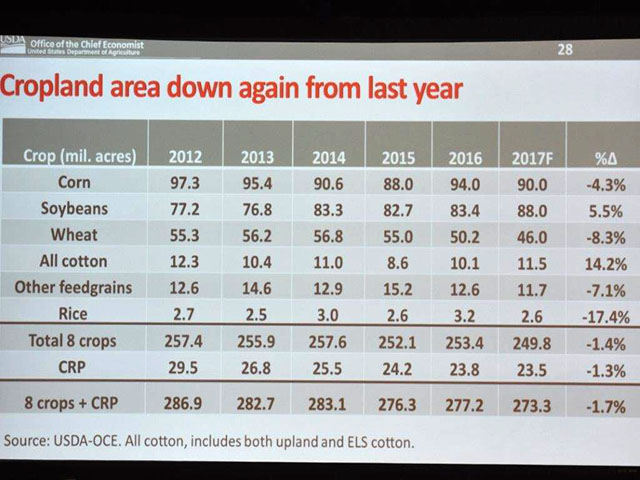