OMAHA (DTN) -- Farmers have put a tremendous amount of hope into the new presidential administration, one that built its candidacy on throwing out the political party which had "Hope" as a central theme.

That's really the only way to interpret the results of the latest DTN/The Progressive Farmer Agricultural Confidence Index, based on responses from 500 farmers from across the United States.

Answers farmers gave to an early December survey produced an Ag Confidence Index of 98, up considerably from the 72 rating in August, and up from the 75.1 rating farmers set in December 2015.

The DTN/PF index centers on a baseline of 100. Confidence levels above 100 indicate optimism, the higher the number, the greater the optimism. Indexes below 100, which has been the case since March 2014, indicate farmers are pessimistic about their condition.

The movement back to neutral is interesting in itself. But it's the numbers behind that index that tell a story unprecedented in the history of the Ag Confidence Index.

Since 2010, DTN has surveyed farmers three times a year, before spring planting, just prior to harvest, and at year's end, to determine their opinions about their current economic situation and about that situation in the year to come. Those answers create a score for farmer's "current condition," how they feel about their businesses at the time of the survey, and a score for their "future expectations" for the coming year. Those two scores create the actual index.

It would come as no surprise that farmers, surveyed in early December, were pessimistic about current conditions. Commodity prices show little sign of more than minor price blips to cash in on. DTN articles on land and input costs likewise show only minor relief there. Acreage estimates for 2017, along with weather predictions, give little chance of a short U.S. crop.

Those and other concerns were likely behind the lowest present condition score in ACI history; an extremely pessimistic 44.2, below the previous-record low of 56 in August 2016 and well below the 81.7 of December 2015.

When asked about their expectations for the future, however, farmers' answers created a score of 127. That's an optimistic expectation not seen since the early days of the DTN/PF index, when farm incomes were at historically high levels. In fact, since 2011, even when overall index levels were in positive territory, farmers have been slightly pessimistic to very pessimistic about the future.

"There's little rationality around this result," said pollster Robert Hill, principal of Caledonia Solutions, and the creator of the DTN/PF Agricultural Confidence Index. There is little sign of a significant increase in commodity prices, and while land and input costs have come down, that drop has, in general, not kept pace with commodity price levels.

"Yet the negativity around (farmers') current situation isn't enough to offset the flood of positivity of the prevailing farmer attitudes about the future.

"The only thing you can tie that positivity to is the election. Farmers have a lot of hope for the new president."

The optimism comes as no surprise to Mike Brandenburg, a farmer and state representative from Edgeley, North Dakota, and a member of President-elect Donald Trump's ag advisory committee.

"We in rural America finally have a president that will listen to us. He'll finally lift the environmental rules hanging over us, things like the waters of the United States, the Endangered Species Act, (rules) that are keeping us from farming our land the way we need to."

Brandenburg was part of the North Dakota group that brought the original lawsuit against the Environmental Protection Agency to stop new Clean Water Act policies known as waters of the United States, or WOTUS. Turning back the WOTUS rules was a campaign promise of President-elect Trump, one of the few promises specifically aimed at farm interests.

Brandenburg admits that higher profits in agriculture are still a ways down the road. "Time will tell," he noted, when asked whether the new trade agreements the incoming Trump administration has been discussing will mean more exports of agricultural goods or not. "We have to make these trade deals more fair for the U.S. But just getting these regulations off of us, that's reason for a lot of optimism."

Hill notes there are differences in the exuberance along income lines. Farmers in the $100,000-$249,999 and $250,000-$499,999 income levels gave answers that created future expectation ratings of 112.6 and 129.9, respectively. Farmers with incomes of $1 million or more were a decidedly more pessimistic 79. That could suggest, Hill says, that farmers in the lower income levels were more concerned with regulatory and other non-profit-related issues that a Trump presidency has promised to remove. Larger farmers, faced with a higher level of concern over land costs, employee needs, and commodity prices in general may put those worries ahead of the more emotional regulatory issues.

DTN/PF also surveys 100 agribusiness owners, asking a similar set of questions around their confidence in the present and future economies. The Agribusiness Confidence Index for December was 88.4, down slightly from 90.6 in August, and below the 97.6 level in 2015.

"Their current situation index is down double-digits from where it was a year ago," Hill said. These agribusinesses simply do not share their customers' wild optimism about the future.

"The fact that these agribusiness and producer indexes differ so greatly on the future expectations is revealing, and has never happened like this in the history of the ACI," Hill said. "One seems wildly optimistic and the other seems mired in negativity. It's hard to understand how they can both be operating in the same rural communities." 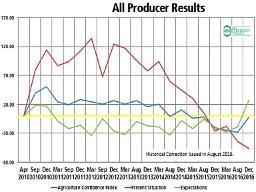