OMAHA (DTN) -- Each year, DTN publishes our choices for the top 10 ag news stories of the year. Today we wrap up our rundown with No. 1: Record harvests of corn and soybeans that fortified bearish arguments in 2016. Here are the impressive numbers, but also why this had such a significant impact on farmers and earned DTN's top ranking.

(To see the full list of Top 10 stories and links to find them in our archives, scroll down to our Editor's Note at the bottom of the story.)

With 2016 nearly in the history books, it seems fair to say that the year will be remembered for its record corn and soybean harvests. Never before has any country ever produced 15.23 billion bushels of corn or 4.36 bb of soybeans, let alone both in the same season.

Not only was 2016 a year of good harvest, it was the fourth consecutive year of good harvests and, because of that, ending surpluses grew larger. According to USDA, U.S. ending corn stocks will total 2.4 billion bushels in 2016-17 or 16.4% of annual use. That is the highest stocks-to-use ratio in 11 years, an impressive accomplishment that took DTN's national index of cash corn prices below $3.00 a bushel in the fall to its lowest level in eight years.

Even though cash corn prices suffered a fall in the latter half of 2016, it could have been worse. Dry weather knocked down the size of Brazil's second corn harvest in 2016 and drove export business to the U.S. earlier than usual. We also saw an 18% increase in the value of Brazil's currency this year, which helped make U.S. corn and soybean exports more attractive. Without those two aids, we probably would have seen more corn prices with a 2 in front.

In soybeans, it's still not clear how demand will match this fall's record harvest. If we go by USDA's numbers, the U.S. ending stocks estimate of 480 million bushels will result in the largest ending stocks-to-use ratio in 10 years, at 11.7%.

Had someone tipped us off a year ago that Brazil would harvest 3.54 bb of soybeans and the U.S. would follow that with another 4.36 bb in the fall, we would have bet big money that DTN's national index of cash soybean prices would have gone down from its year-ending price of $8.19. But we would have been wrong.

On Dec. 9, the cash soybean index price of $9.66 came about largely because China's appetite for soybeans continues to be stronger than USDA and most experts expected. This later dropped to $9.40, as of Dec. 29. The funny thing is that USDA's tendency to underestimate soybean demand has been going on for more than 25 years and there is still no sign of that changing. China continues to sneak soybeans out of the U.S. on the cheap.

The most obvious display of soybean demand erupted early in 2016 when a four-month rally pushed cash soybean prices more than $11.00 in June. Because the rally followed 2015's big harvest and happened at a time when many were correctly anticipating increased soybean plantings, the early half of the rally was largely met with skepticism.

DTN noted bullish inverses in new-crop meal spreads in April, highlighting the seriousness of demand early in the move. The bullishness of soybeans' March-to-June rally eventually gave way to the bearishness of 2016's record harvest, but also served as another reminder that even bearish years can offer bullish opportunities.

Coming off of 2016's record harvests, both corn and soybean prices may struggle to trade higher early in 2017, depending on how South America's weather goes. USDA's fundamental outlooks will start bearish for both, as is the traditional pattern when the new season starts with plentiful supplies and then assumes trend-line yields for the summer ahead.

That early bearishness is part of the hangover effect that follows record harvests, but eventually the star of the show will be weather. So far, La Nina readings are not expected to be bullish enough to produce hot and dry weather in 2017, but things can change. 2016 was the fourth consecutive year of successful harvests. Will 2017 be No. 5?

Editor's Note: This ends our DTN top 10 ag news stories of 2016 list; you can find a bonus story on weather's influence on the year in today's top stories.

Looking for the ones you missed?

Check them out at the following links:

No. 5 -- Extreme Volatility and Red Ink During Year for Cattle Industry http://bit.ly/…

No. 3 -- China's Role Grows in Agribusiness Deals to Exports and Trade Disputes http://bit.ly/…

We welcome your feedback, as well as what you think were the top ag news stories of the year, at talk@dtn.com or on our DTN/The Progressive Farmer Facebook page. 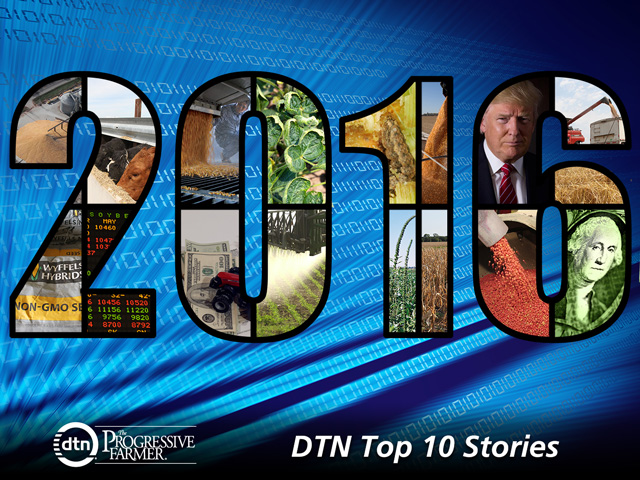