MINNEAPOLIS (DTN) -- Organic and non-GMO sales in the U.S. amount to chicken feed, but that chicken feed is increasingly imported because U.S. farmers aren't in a position to fill demand for certified organic or even non-GMO feed.

The gap between supply and demand in organic and non-GMO feed markets offers an opportunity for farmers, but price takers aren't jumping to join the marketing wave.

That was an overarching issue at the Organic and Non-GMO Forum this week in Minneapolis, Minnesota, that was paired with the Oilseed and Grain Trade Summit. Participants at the organic/non-GMO event included a mix of industry insiders, investment fund managers, grain marketers, processors and a smattering of farmers who came looking for potential market opportunities.

The organic food market has become a $40 billion industry that continues to see double-digit annual growth. Added to that now is growing demand for crops grown without genetically modified organisms. "There is a lot more demand now for the data on non-GMO crops," said Kellee James, founder and CEO of Mercaris, a company that tracks the organic market.

The non-GMO demand is largely in feed with both corn and soybeans. The market is growing partially because of the marketing push by food companies to stick a non-GMO label on their food, or avoid future disclosure regulations being worked on at USDA to label food ingredients from crops produced with genetically modified organisms.

Much of the demand for organic and non-GMO feed grain and oilseed comes from the dairy industry and poultry operations, both broilers and layers.

Texas farmers Justin and Rebecca Crownover came to the meeting to connect with grain marketers interested in traceability and sustainable crop production. The Crownovers and their partners in their farm operation grow mostly irrigated yellow corn, white corn, seed sorghum, seed canola, cotton, wheat and triticale. "Today, we think non-GMO is something we can sell our grain as and transition into that very easily," Justin Crownover said. "So we're just trying to use that as a way of gaining a better price for our crops, and hoping we can add something to somebody else's product that adds some trust to consumers."

Premiums are also there for non-GMO crops, but they are significantly lower than organic and harder to predict. Regional factors play more into that. USDA reports non-GMO feed was pulling a premium of 12% to 14% above the average market price last year compared to genetically engineered feed commodities.

"We have had an increasing gap in the supply chain that has been filled by imports," James said.

Just like their biotech cousins, organic feed prices have fallen in 2016. In January, a bushel of certified organic feed corn was going for $10.14 a bushel, but it is down to $8.21 this month. That compares to the average $2.97 corn price under DTN's National Corn Index. Production costs for organic crops, however, are considered at least 30% to 40% higher, according to USDA.

A significant problem for organic production is the three-year transitional period for the USDA organic standard that, in the past, has put farmers in a marketing limbo for their products. To fill that void, there's an increasing focus on "transitional" certification. Such certification can help farmers sell to livestock and poultry producers who are marketing their protein products as being fed from non-GMO crops.

Crop insurance at USDA has improved for both organic and transitional crops. Farmers can protect their higher prices under crop insurance, especially if they have a contract to deliver at a particular price.

Right now, there are roughly 3,000 operations in the middle of the three-year transition to organic certification. But U.S. farmers are going to keep conceding that organic feed market and premium price to imports because the total known acres transitioning to organic for corn and soybeans right now totals roughly 262,000 acres.

"We're falling well short of what the demand is domestically, said Peter Golbitz, founder of the company Agromeris, a consulting firm for companies looking for organic or specialty ingredients. "There is plenty of opportunity to grow these products."

Golbitz said there was a need for more than 1 million more acres of certified organic production to meet demand. In reality, that acreage likely needs to be four or five times larger, said Mark Schuett, a northwest Iowa farmer and president of American Natural Soy. The rotational demands for an organic farmer are much longer than conventional acres. Schuett said he may plant corn or soybean in a particular field once every four years to suppress weeds and build up his soil.

"There are just a lot of different things to think about when you start doing organic," Schuett said.

More farmers were looking at organic before the biofuels wave hit, then prices shot up for conventional crops. If commodity prices continue to wane, more farmers will again revisit the possibility, Schuett said.

"They have to get in with their eyes wide open," he said. "It's not like you just start growing organic and get $10 corn. Yeah, you will, but it's a lot of work too."

Schuett also noted he may spend triple the time in his field during the summer compared to a conventional farmer who may grow significantly more acres than he does. Organic fields demand far more weed and crop management, he said. "It's going to be a tough road to hoe to get thousands of more acres to certified organic," Schuett said.

Feed companies and processors import organic grains and oilseeds, partially because they are considered cheaper than what those companies would pay U.S. farmers. Golbitz and others cautioned, however, those imports create risks for those companies because organic standards and inspections are not nearly as rigorous in most of these other countries now shipping organic feedstuffs to the U.S.

"We really need to stimulate organic crop production in the U.S. for these markets," Golbitz said. "If we continue to rely on imports, we are going to set ourselves up for disaster." 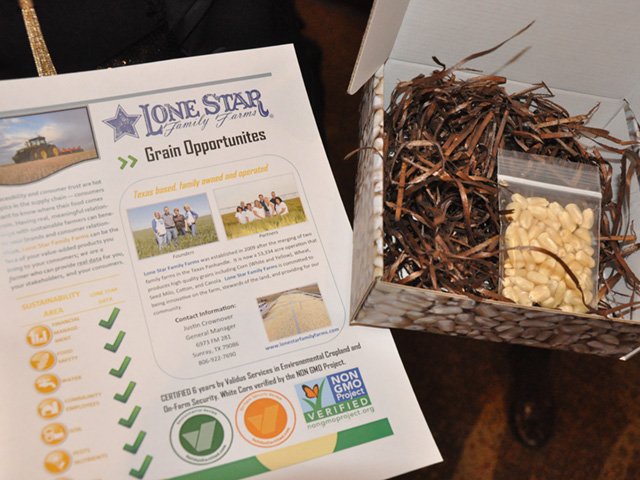