Right now, a soybean is being harvested that will win a cruise through one of the world's greatest engineering marvels -- the Panama Canal. After commingling with all the other soybeans from its field and its region, it may go in one of any number of directions.

Forty-four percent of this year's soybeans will be sent to a domestic processing plant. About 8% will remain as ending stocks. And 45% will be exported to some other country. Of that portion, 56% will be exported out of the Gulf of Mexico. Not all of those beans will automatically go through the Panama Canal to reach Asia, but it is their quickest route to get there. So let's figure that one in every four American soybeans could take that cruise through the Panama Canal.

Fortunately for harvest-time basis bids, grain transportation costs are looking reasonable all up and down the supply chain this year. Local trucking costs are moderated by relatively cheap diesel fuel this year. Barge rates on the lower Illinois River are running 25% below the three-year average. Meanwhile, shuttle train tariff rates from Corn Belt origins to U.S. ports are anywhere from 2% to 11% cheaper this year than last year at this time. Most favorable of all, ocean freight rates are 33% below their four-year averages as overcapacity plagues the entire industry, including dry bulk freight carriers. It's so bad that one Korean shipping company, Hanjin, declared bankruptcy last month -- the first time in 30 years that a major container shipping company has done so.

After the past few years of rail expansion, there is tentative optimism that the railroads will have sufficient capacity to handle this year's record-large harvest. But keep in mind that every extra soybean that travels west on the ocean is one less soybean that crowds the rail lines and tests that optimism. We may be fortunate that the boom-and-bust cycle of ocean freight is occurring at just this critical moment.

USDA's Agricultural Marketing Service estimates the cost of shipping grain in a dry bulk cargo vessel from the Gulf of Mexico to Japan at $30 per metric ton, or about 82 cents per bushel.

Taking that trip to Asia takes 45 days if a vessel travels around the Cape of Good Hope, but only 30 days if it uses the Panama Canal, a short cut between the Atlantic and Pacific Oceans. And the Panama Canal is more enticing than ever, now that it has opened up a shiny new set of expanded locks.

I visited the canal last week, hoping to see some soybeans or other U.S. grain cruising through the big new locks, but the new crop hasn't arrived that far yet. Nevertheless, I witnessed some ships so gigantic, I'm sure the original canal builders could never have dreamed of their size. And it turns out that having three lanes of canal traffic instead of two lanes will be critical to the future efficiency of U.S. grain exports.

For more than 100 years, the old locks, completed in 1914 by the U.S. Corps of Engineers, handled ships up to a certain size. So-called Panamax vessels had to fit within locks that are 110 feet wide by 1,000 feet long, with a draft 42-feet deep.

The lane for the expansion was actually started by the U.S. military in 1939 with the idea of moving aircraft carriers through the canal. But their initial cut was flooded by rain and then abandoned until 2007. On June 26, 2016, the expanded locks, built in the years since the canal has been turned over to the country of Panama itself, were finally opened to much fanfare. They can handle much more massive ships -- anything that can fit inside locks 180-feet wide by 1,400-feet long, with a draft up to 60-feet deep. In theory, Neopanamax vessels can hold up to 12,600 20-foot containers.

As of last week, they haven't yet tested that maximum -- the largest container ship to transit the canal so far held 10,000 20-foot containers. They also haven't seen the first dry bulk carrier with the 2016 crop of soybeans, but already we can analyze the effect the canal's expansion may have on grain movement.

It's not necessarily that the tolls to use the canal will get any cheaper. In fact, analysis by the Soy Transportation Coalition shows that even for soybeans that would be carried on a larger vessel through the expanded locks (dividing the toll cost into 3.1 million bushels instead of 1.8 million bushels per vessel, for instance), the toll might still cost about 7.4 cents per bushel, depending on discounts and the prevailing toll structure.

Instead, the real benefit to soybean shippers comes from the efficiency of the interoceanic waterway's third lane to handle the larger Neopanamax-size ships and thus, the reduction of potential backlogs in traffic. Already, analysts at the Panama Canal Authority have noticed that for the 11 months of the current fiscal year, average Panama Canal Waters Time for the dry bulk carriers is lower than the previous year, due to a drop in transits compared to the same period in fiscal year 2015.

Katya Quintero, international trade specialist at the Panama Canal Authority, explained to me: "Waiting times of zero days is highly unlikely; there is always waiting time, but it is possible that the waiting time of grain ships may decline in the Panamax-size locks." Prior to the expanded locks' opening, a ship might have waited for up to three or four days to enter the canal, using a first in, first serve order. The ships going through last week had an average wait time of about 14 hours. Total Panama Canal Water Time, the average time it takes a vessel to navigate the canal, including waiting time for passage, is 24.58 hours.

This idea of faster transit is what makes the canal's expansion exciting. For one thing, the U.S. grain industry's reputation for quick, reliable shipments is on the line. On top of that, any reduction in waiting time is also a reduction in fuel use and thus, a reduction to a shipper's total cost per trip.

That's all true whether or not soybean shippers use the Neopanamax locks. So far, analysts aren't expecting to see the 2016 crop of soybeans loaded onto drastically different vessels compared to previous years. There may be some loading of "Panamax-plus" vessels, with Panamax-size (110 feet wide) dimensions and capable of loading with additional draft. However, during 2016, it's unlikely there would be any soybean movements through the expanded canal locks in the larger Capesize vessels. Quintero noted, "We have noticed the use of +90,000 DWT (deadweight tonnage) dry bulkers out of the U.S. Gulf terminals to Europe for the grain trade."

Much depends on infrastructure spending here at in the U.S. The lower Mississippi River is already capable of sometimes loading ships to a draft as deep as 47 feet, which is already a deeper draft than the old Panama Canal locks can handle, and would require transit in the expanded locks. Further, the executive director of the Soy Transportation Coalition, Mike Steenhoek, notes, "There is an effort to dredge the lower Mississippi River to 50 feet with increased funding from the federal government. The current Water Resources Development Act being debated in Congress has a provision that would increase the federal government share from 50% to 75% for dredging the lower Mississippi River to 50 feet."

So there may come a day when future soybean shipments may get to take advantage not only of the overall efficiency of having a third lane of traffic through the Panama Canal, but also they may even use that larger, more efficient lane themselves. That would be a very special cruise indeed for any little soybean on its way to Asia. 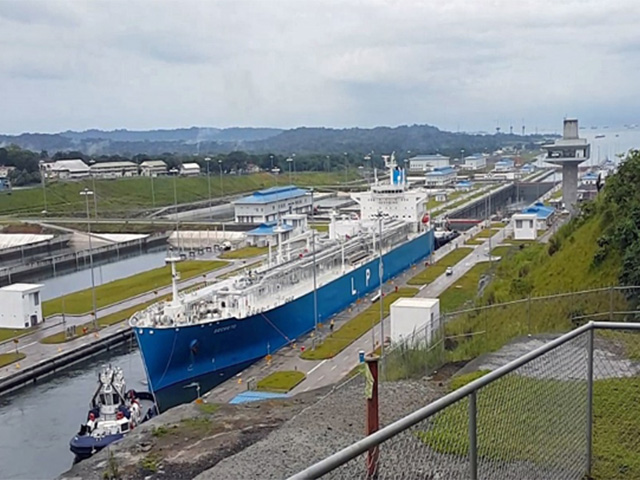