Now, worse prospects for 2017 grain markets mean many cash renters will have little choice but to plead poverty when renewing leases this fall. What's different this time is that farm lenders will be the referees making sure rent gets knocked down a serious notch or two, some analysts caution.

Three consecutive years of falling farm incomes from 2014-2016 will have "evaporated" working capital below acceptable credit standards for many producers, cautioned Sterling Liddell, an economist with Rabobank's Food and Agribusiness Research group. In a new report on cash rents and land values, Liddell wants landowners to get a wake-up call when land rents are renegotiated this fall.

"Right now, from what we gather, farmers are on the edge of their liquidity. In other words, they've burnt their liquidity due to high land rent and negative returns. They are now financing with equity or dipping into the wealth accumulated over their lifetimes, just to finance production. That's a fairly ominous position to be in," he told DTN.

Some growers hesitated to have frank talks with landowners last year, for fear of losing their leases to more aggressive farmers. Others know that many elderly owners rely on rents for retirement income, so they postponed rent reductions for as long as possible. Steep property tax increases in Ohio, Nebraska and Indiana already cut into owners' returns, souring conversations before they started. Now the multi-year farm recession has taken a toll, Liddell said.

"At the end of the day, the real gatekeeper on this is credit, the ability to finance. If you simply cannot finance because you don't have [enough] working capital and value of crop isn't strong, you won't have the money to bid into land," he told DTN. Bank standards generally require liquid, working capital reserves of at least 20% of cost of production to qualify for credit, he added, and many operators risk flunking that test.

Mid-year reports from bank regulators confirm deteriorating credit quality among crop and cattle producers. Last week, a Kansas City Federal Reserve survey estimated that as of June 30, 7% of farm loans had major or severe repayment problems, but the share of loans with at least minor repayment issues had bounced to 22%. In the mountain states, 30% of farm loans had some type of repayment problem. Results in that region reflect a high dependence on wheat, cattle and energy leases, all of which have experienced steep declines in recent years. Lenders in the Corn Belt estimate that roughly 20% to 25% of borrowers could have some financial difficulty by next season if profitability doesn't improve (see related story, "Cash Rent Handicaps" https://www.dtnpf.com/…)

Last year, most landowners and professional farm managers balked when asked to scale back cash rents. On average, Illinois rents slipped a mere $6 per acre in 2015 and another $7 per acre in 2016, resulting in an all-state average of $221 per acre cash rents in 2016, according to USDA. Even with double-digit cuts in fertilizer prices and lower fuel bills, average Illinois renters won't likely break even this year or next, unless something changes in cost of production, University of Illinois economist Gary Schnitkey said.

At this stage, University of Illinois is plugging $3.50-$3.60 cash corn and $9.50 soybeans into crop budgets for 2017, with no Agricultural Revenue Coverage payments for either one. That means lower revenue projections for 2017 than 2016, Schnitkey said. "It keeps the pressure on to reduce cash rents. I think we'll see a lot of operations with high rent and low working capital that will simply have to make those cuts."

The onus is on land rents because it's difficult for an individual farmer to lower cost of production much, Liddell added. "Two or three fertilizer companies make decisions on supply and demand. Two or three seed companies make decisions on supply and demand. They're all publicly traded companies whose stock price is influenced by what they charge for their products," he said. Cash rents typically are not only a Corn Belt grower's largest single expense, they're an expense negotiated one-on-one.

Liddell's report, "The Land Value Wave Dips," notes that "the most significant driver in deteriorating economics of farming is a 40% to 50% decline in commodity row-crop prices and the inability of some costs -- particularly land -- to decline at the same rate." Assuming corn averages below $4 per bushel, Liddell believes cash rents should slip to about $1.30 per bushel of corn produced, down from a rough average of about $1.60 per bushel now. That generally would lead to a $30- to $50-per-acre, one-year drop in rents, just to get growers to breakeven.

To keep that in perspective, such an adjustment would likely reset rents back to the 2010-2011 range, he added, not to the level they were set prior to the corn ethanol binge that started in 2006.

Failure for landowners to agree to concessions could pose surprise consequences, especially for the highest-priced rents demanded by professional investors.

In the past, dozens of Midwest operators might have lined up to pay $300 or higher cash rents, just to expand their land base and spread machinery overhead. Now many renters will have no choice but to curb their enthusiasm, since they're losing money on every acre they rent, Liddell stressed.

In the Midwest, operators would need to slash fertilizer application rates to make ends meet if average rents don't adjust, mining soil fertility and reducing the long-term value of the land, he said. In more marginal areas of the country, Liddell expects the U.S. to idle 3 million to 5 million acres of farmland no longer needed, given the grain surpluses mounting around the globe.

"If landowners aren't careful, they may end up with no tenant and be forced to farm the land themselves," he said. Scrambling to find a contract farmer at planting time might be a worse scenario than agreeing to a rent concession for the current tenant. 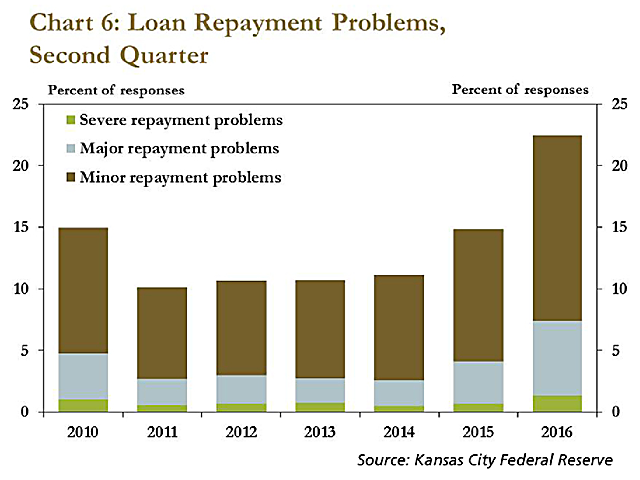