PLATTSBURG, Mo. (DTN) -- The flame from the Chinese economic dragon has flickered of late, and that has cast some shadows for U.S. agricultural equipment manufacturers. They have been able to sell fewer machines stamped "Made in America" to Chinese farmers. On the other hand, China remains a good location for manufacturers to produce farm machines both for sale to Chinese farmers and for export to farmers around the world.

As DTN/The Progressive Farmer is spotlighting this week, nearly every major agricultural sector in the U.S. is placing more importance on its business future in China.

In this third story of a five-part series, DTN continues to look at what does this mean for U.S. farmers who have become more reliant on China as an export market.

China is key to manufacturers in various ways. John Deere CEO Sam Allen recently told CNBC that his company's fortunes are linked to China's economic health. Because Deere's sales reflect commodity prices, "We need to see some improvement in those prices to see some changes in the underlying demand for our products." That means, Allen said, "If the Chinese economy would improve some more, that would stimulate more demand for commodities, especially agricultural commodities ... That would trigger things to improve again for us."

Boom times for ag equipment exports from North America to China were 2004 to 2013 when exports to China annually rose an average of 21.7%, according to the U.S. Department of Commerce's International Trade Administration (ITA).

Although U.S. farm machinery exports to China totaled a still respectable $376 million in 2014, that number represents a decline in sales growth from previous years, according to ITA data. Final numbers aren't in for 2015, but it likely also saw a decline in export sales growth of American-made agricultural equipment to China.

These declines may have been due to market conditions, but policy decisions also likely played a strong role. The Chinese government, which offers a variety of subsidies to farmers to purchase farm equipment, prefers to subsidize sales of domestically produced machines. In a downturn, that preference would become stronger.

The Big Three manufacturers all export whole goods to China, but also all have major factories there. Much of that production is for sale to Chinese farmers. But some of the whole goods produced in China go elsewhere on the world market, even to North America.

Recent economic conditions in China have produced mixed reactions among foreign manufacturers. Some are reportedly backing away a little as others increase their presence in China.

The recent slowdown in the Chinese economy does not concern AGCO's CEO and President Martin Richenhagen. "The double-digit numbers [of increase] from a few years ago started from a low base," Richenhagen recently told DTN/The Progressive Farmer. "Five percent growth on today's GDP might be more in absolute numbers than 20% growth 20 years ago."

AGCO plays both sides of the import-export fence. It traces its China roots to the Chairman Mao era when the Finnish company Valtra exported high horsepower tractors to the Communist regime. AGCO acquired Valtra in 2004 and still ships large Valtra tractors to China, most of which are purchased by state-owned mega farms.

Those sales may have slowed, but AGCO has picked up its manufacturing pace in China in recent years. In 2011, it bought an existing harvester factory in central China and last year opened a new tractor factory in eastern China to make 80- to 120-hp tractors destined for both Chinese farms and for export to Brazil, Africa and North America.

In building for such a wide marketplace, AGCO decided to build a versatile platform that could function well in a variety of farming environments. This was a bold move because the Chinese government previously required that manufacturers in China—foreign and domestic—use a design owned by the State. "It was the Communist way," Richenhagen said of the 40-year-old design. All foreign players at one time "were using the same design, the same drive train and the same engine. That is why we decided to design our own. We wanted to out-perform other Chinese manufacturers with performance and design." The result was the Massey Ferguson Global line.

Product design is not the only hurdle facing foreign manufacturers in China. Distribution can be challenging. "It's not like here [North America] where there are dealers all over the place," Richenhagen said. "You need to rethink your distribution model [in China]."

In siting manufacturing facilities, Richenhagen said, location is a key consideration. "It [China] has a pretty strong infrastructure. But when you invest there, you have to be sure you have a good power supply and roads and so on, which is not always the case." A skilled labor force also can be hard to find. "Retention is a problem, so you need to invest in training and education. Otherwise they [workers] are more vulnerable to being hired away."

Despite the current economic slowdown, the general business environment in China remains good, Richenhagen said: "China still suffers from corruption, but it has a certain political stability, which makes it less volatile than other countries in the world."

Editor's Note: This is the third of five articles looking at the growing influence of China on American agriculture. Thursday's article will examine the trade battle over distillers dried grains and the impact that has on U.S. ethanol industry and corn farmers. 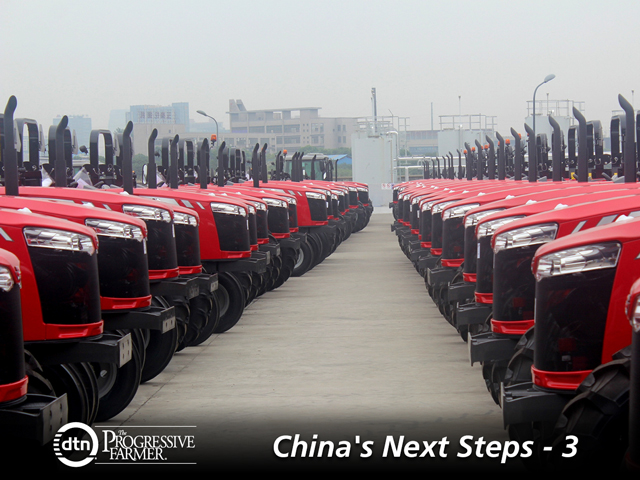