SHELBY, Neb. (DTN) -- It was a little chilly Monday morning as Greg Whitmore gave an early tour of various cereal rye cover-crop mixes on his farm.

Whitmore is one of 40 farmers taking part in the Soil Health Partnership, a long-term research demonstration project led by the National Corn Growers Association with support from Monsanto Co. and the Walton Family Foundation. Whitmore was showing how various mixes of cereal rye, turnips, radishes and clover were doing on his fields. The cover crops were applied at different times and with different methods, ranging from aerial seeding to using a high-boy seeder in the field.

"Anytime the average air temperature is above 40 (F) degrees, rye will be growing," said Nick Goeser, director of the Soil Health Partnership for NCGA. "It's a really versatile cover crop and a good fall-back."

Forty farmers are involved in the Soil Health Partnership, mainly in Indiana, Illinois and Iowa, and another 25 farmers are likely to join the partnership within the next year, Goeser said. The reach is expanding, as some groups in Nebraska want to set up a specific program just for that state that would link into the national efforts.

Soil health is going to get a lot of focus in the coming week. World Soil Day is Dec. 4 and will be celebrated by the United Nations Food and Agriculture Organization. Around that time, a new soil-health institute in the U.S. will be launched as well with a focus on studying soils nationally to increase long-term productivity and resiliency.

Agricultural groups plan to take these soil-health elements to Paris for the climate talks to make the case that more needs to be done in global climate discussions to ensure resiliency in the food system.

"With Paris coming up, we're going to be talking about air quality more and more and the U.S. commitments," Goeser said.

Whitmore farms about 2,500 acres, of which about two-thirds are corn and one-third are soybeans. Whitmore's corn crop is a mix of seed corn, grain and silage. His silage supplies a large nearby dairy. The dairy also provides crop nutrients by pumping effluent from the dairy farm through their pivots, as well as offering slurry for fields. Whitmore said he normally will get a couple of one-acre-inch applications from the dairy effluent on his fields in a given year that will satisfy most of the fertilizer demands for his corn crop after he plants it. Whitmore notes the difference in areas that get effluent applied and those that don't.

"You can see over here with some of the cover crop where the effluent covered and where it didn't," Whitmore said. "There's a definite growth difference."

While his cover seeding costs can run $15 to $25 an acre depending on the application and mixes, Whitmore noted his custom silage cutters have told him they see a difference in silage fields where cover crops are used because the cover crop holds nitrogen that can later be taken up by the silage corn during different growing stages.

Goeser visited Whitmore's farm Nov. 23 as part of a road trip with his father and brother. Goeser wanted to see how Whitmore and other area farmers were growing cover crops while also using effluent and slurry mixed in from a dairy. Whitmore was concerned that applying slurry after seeding a cereal rye-radish cover mix would tear up the field too much. That didn't turn out to be the case as the cover crops recovered quickly and began growing.

"I've had a number of people ask me how to work cover crops into a dairy system," Goeser said.

Whitmore started planting cover crops in 2002-03. He had started selling silage to the new dairy a year or two earlier. After a couple of springs of watching dust blow off the fields, Whitmore said he realized he needed to change the way he manages his fields. That's when they started putting some cereal rye down, he said.

"I'm a firm believer we have got to have a cover over that crop," Whitmore said. "... It help(s) conserve moisture, even though it takes a little bit to grow it."

Whitmore said his fields normally will have about 40 pounds of rye for seeding to get the airflow working well on the seeder. Whitmore will add about four pounds of turnips and in some fields also add radishes and clover in others. In some fields, Whitmore will lease the cover-crop stand for cattle to graze.

Whitmore reiterated that one of the big benefits of the Soil Health Partnership is the chance to share knowledge with other farmers and learn from them. "There are always those unanswered questions out there you need to figure out a way to work around or work better," Whitmore said.

Still, one of the bigger issues in the soil-health debate is quantifying the financial gains for producers who plant cover crops. Whitmore agreed that's an area where he would like to see more research. The payback is longer term as cover crops give farmers a basis for improving productivity, he said.

"That is the one question that needs to be figured out," Whitmore said. "We're not just doing this to make the field pretty this time of year and see some green as soon as the snow is gone."

Goeser said there are efforts going on in lease agreements to try to apply broad soil-health principles to create cost-share agreements between the landowner and renter. Other groups are looking to tie soil health into crop insurance as a risk-management tool for production. A task force led by the group AGree is considering how that may work.

Last week, members of the Soil Health Partnership took part in a couple of scientific and sustainability events tied together in Minneapolis. Bryan Biegler, who farms about 2,200 acres of corn and soybeans near Lake Wilson in southwest Minnesota, began converting to no-till, strip-till and has been working over the past three years to implement cover crops into the operations. The strip-till runs a shank about every 30 inches and makes about an 8- to 10-inch-wide strip to plant in.

"The biggest reason I changed was erosion," Biegler said. "I was getting these heavy rains after planting and getting a lot of runoff. I had been looking at strip-till for about 10 years, and finally after seeing the gullies, I realized I had to make a change."

Biegler bought a high-clearance sprayer and put a seed box on it so he could seed rye grass or cereal rye into a standing corn crop. That also allowed him to start doing some custom seeding of cover crops. Biegler has noted how the cover crops absorb water, particularly in a couple of lowland spots where he has often had difficulty getting the field to dry out.

"Now that I've seen the erosion control, I want to get looking at water infiltration and seeing how that is improving," Biegler said. "The little bit of testing my local NRCS office has done, we've seen some big improvements in the water and how much it will soak into the soil profile."

Biegler joined the Soil Health Partnership this year as a way to better learn more practices and network with other farmers using similar practices.

"I thought it would be a good way to ask more questions about this stuff and try to avoid some pitfalls with it," he said.

Steve Berger said last week in Minneapolis that his farm in southeast Iowa is in its 36th year as a continuous no-till farm with a 50:50 corn-soybean rotation. Berger credits his father who was always focused on conservation, as well as a county extension agent in the 1970s that pushed farmers in Washington County, Iowa, to adopt no-till farming.

"We're in southern Iowa and we get the hills so there is soil erosion," Berger said. "Dad dropped the plow in the '60s and went to a chisel plow, but he was always conservation-minded and really stuck to it."

The Bergers also added cover crops about 15 years ago. Despite decades of work in no-till and cover cropping, Berger joined the partnership this year to learn more about what the scientific community is doing in the arena. "I really want to know what other guys are doing differently out there," he said. 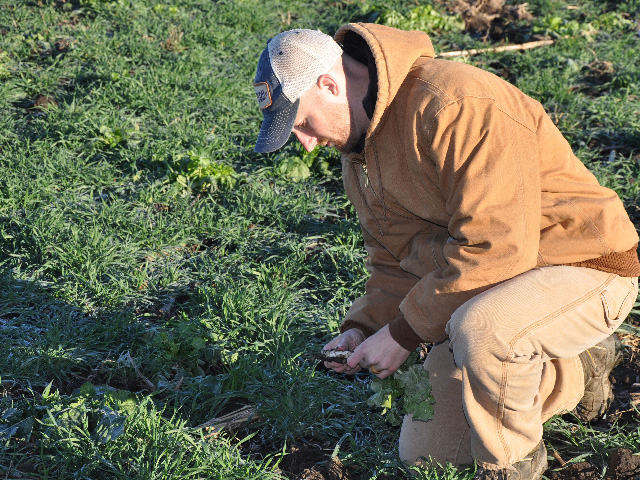