What if everything you've worked for all your life -- a successful farm business, a loving family, a legacy to leave your grandchildren and great-grandchildren -- was torn apart in a matter of months? This scary scenario, unfortunately, is not uncommon in families that fail to adequately plan their farm succession.

Generally, disputes among farm heirs fall into three categories that trip up a successful transition to the next generation.

1. Disappointed beneficiaries: The courts are crowded with heirs suing each other for inheritances they feel entitled to but did not receive.

Kitt Tovar Jensen, attorney and coordinator of the Beginning Farmer Center, at Iowa State University, gives this example: Three siblings claimed their brother unduly influenced their father to enter into a below-market-rate farmland lease and below-market asset valuation to gift land to him. The court ruled the father was not a "vulnerable elder." His medical records showed normal memory, judgment and comprehension. The father was issued a driver's license, managed his own finances and served as the executor of his wife's estate and a township trustee. The brother did not unduly influence the father.

In another case, Tovar Jensen explains Mom updated her will in 1986 after her husband passed away, dividing her estate equally between her son and daughter. In 2002, she suffered a stroke and relied on her daughter, who had moved back to the family farm to assist her. In 2015, Mom executed a new will, leaving her entire estate to her daughter, stating, "I am deliberately omitting Son as a beneficiary. I hold no ill will against him but wish to leave my entire estate to my daughter because she has greater financial need and because she has cared for me for many years without any compensation."

The mom passed away in 2016. The son filed a lawsuit claiming the 2015 will was the result of undue influence. The jury ruled in favor of the daughter.

Estate tax attorney Kevin Bearley, principal with Pinion (formerly KCoe Isom) highlights an Indiana case involving three brothers who actively farmed together. The farm was worth around $6 million when the oldest brother suddenly passed away. The brothers did not have a buy-sell agreement, but they did have a life insurance policy of $500,000 that was to be used to buy out the surviving spouse. The widow, however, thought the brothers owed her $2 million. "They were ready to take it to court and ended up paying $100,000 in attorney fees before resolving the issue," Bearley reports.

How to avoid this mistake: Talk it out. Let your heirs know what you are planning and why. Give gifts during your lifetime. Have adequate life insurance (owned by your heirs, not you). Have heirs inherit separate parcels of land, so if one wants to sell, the entire farm doesn't need to be sold. Have buy-sell agreements so your heirs know what it will take to buy out their partners. Talk to them about it. Ask yourself if you really want to leave nothing to some of your children. What about your grandchildren?

2. No plan at all: The harsh reality is by avoiding conflict and difficult decisions in your lifetime, you may be setting up your family to never speak to each other again. "You can have a smaller problem now or a larger problem later," advises Lance Woodbury, Next Gen adviser and principal with Pinion and Progressive Farmer Family Business Matters columnist. "There is a reason to start planning now to avoid pain between family members later," he explains.

Case in point: "Two sisters, who lived across the road from each other and whose husbands farmed together in the early 2000s, inherited land from their mom and dad, who had no estate plan," Bearley relates. "There were no business entities to apply valuation discounts. Everything was on a Schedule F. The estate tax bill came to $1.5 million. The sisters argued about how to pay off the IRS. One sister wanted to pay in installment over 15 years. The other did not want all the property to have a lien on it that long. The debate got so intense, the sisters were going to take it to court when their attorneys finally worked out an agreement. "But," Bearley says, "these two sisters will never talk to each other again." If their parents had done a better job planning their estate, the huge tax bill could have been avoided altogether.

And, even though the estate and lifetime gift tax exclusion will rise to $12.92 million per person in 2023, Bearley warns farmers and ranchers with smaller estates that the exemption amount is scheduled to go down to $5 million beginning in 2026.

In estates large or small, "either you're in charge of your family's future or the government is," he stresses. "If you don't have a plan, a judge will decide what will happen to your estate. But, you didn't work and sacrifice in your lifetime for attorneys to win at the end of the day," he adds.

When is the last time you updated your beneficiaries on your will, trusts, life insurance and retirement plan? she asks. "I know of one case where a farmer made his will in his 20s, married in his 40s and was married for 40 years but didn't change his will, so everything in his estate went to his siblings. His spouse had to work with her sister-in-law and brother-in-law to get one-third of her husband's estate.

In a court case that showed the value of good planning, Tovar Jensen summarizes: The wife and husband were married 56 years before divorcing. The husband farmed with his dad and brother. He and his brother were gifted shares of the farm partnership, and their two off-farm sisters were given an equivalent amount of cash. After Dad died, the partnership distributed the real estate to the husband.

The wife sued for a portion of the land gifted to the husband. The Court of Appeals agreed with the District Court that the husband was entitled to all the real estate gifted to him, noting the father's estate plan was well-documented and planned. There was ample evidence in the record that the ownership interests were gifts, not compensation, and therefore not considered marital property.

There's nothing sadder than a farmer or rancher who waits too late to reduce estate taxes or protect assets against a tragedy, says Roger McEowen, professor of agricultural law and taxation at Washburn University School of Law, in Topeka, Kansas.

"One Missouri farmer had a sizable estate. He was married and had a daughter in college. He had just built a $300,000 addition on his home. He had no will, no trust, and he was terminally ill with cancer," McEowen explains. "He was looking at a $12 million estate tax bill. Yet, he balked at the cost of legal fees for setting up an estate plan that would save his heirs $7 million to $8 million in tax liability. So, he died leaving his wife and daughter a $12 million tax bill.

"Multigenerational estate plans take time," he advises. "You don't want to move fast. You want multiple meetings, time to make decisions and sign forms while working around the farm schedule.

"I had one ranch family with everything ready to go. We were just waiting for Grandpa's signature. They lived two hours away and got into town every two to three weeks. The next thing I know, Grandpa is in the hospital just before 5 p.m. on a Friday. I take two paralegals with me to the hospital. Grandpa can't speak, but he can nod. We videotape him answering my questions about understanding what he was signing. I had a self-proving affidavit to the will so he could scratch out an X for his signature. We got it done. He died two hours later." That is cutting it too close, McEowen admits.

"No one knows how much sand is in the top of our hourglass. But, we do know that today we are one day closer to death than yesterday," McEowen says. "Planning is key to leaving the legacy you want for your family." 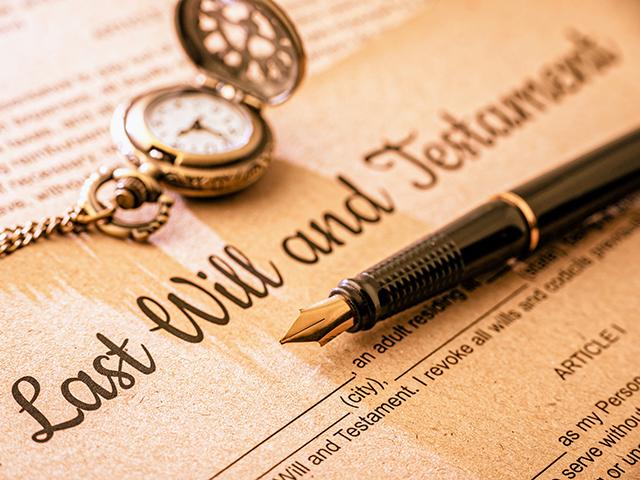