Pitting his own skills against new irrigation-scheduling technology, Eric Wappel says soil-moisture monitors and scheduling software helped him save nearly 28% in pumped water in a side-by-side comparison on his northwest Indiana farm.

Wappel, doing business as Wappel Grain and Herb, irrigates about 60% of his 9,000-acre corn, soybean and mint farm near San Pierre with center-pivot sprinklers and a 60-acre field of subterranean drip tape. The mint, mainly peppermint, is harvested and steam-distilled on the farm for its oil. He rotates mint with the row crops every three to five years.

The farm's center pivots range from 600 to 2,000 feet in length and are fed by electric- and diesel-powered pumps pulling from ponds, streams, ditches, several horizontal as well as traditional wells ranging from 40 to 350 feet deep.

In 2019, Sheldon Alt, CropX's eastern U.S. territory manager, convinced Wappel to run a split-field trial on one of his circles, irrigating corn in the traditional manner on one half and according to soil-moisture probes with variable-rate irrigation (VRI) and scheduling algorithms on the other.

Wappel's north half of the circle was heavier, more uniform soil compared with the sandier southern half, where irrigation was being timed according to soil-moisture readings and plant-growth model software.

Alt says after the harvest results were in, there was no significant yield difference between the two halves of the circle. But, by using the CropX/CropMetrics technology, the production on the sandier soils of the south half of the test was lifted to the level of the "better" soils on the north half -- all while using 28% less water.

"That showed me the promise of the system, because it's always nice to have the same yield or better when you're testing something new," Wappel says. "The next year, we (Wappel farms with two business partners) expanded the system over several more fields and currently have 11 probes monitoring roughly half of our irrigated acres."

Alt explains the system signals the need to apply irrigation water by monitoring how much soil moisture the crop is consuming. In its calculations, the software also takes into account soil types, crop-specific plant-stage growth estimates, short-term precipitation predictions and local evapotranspiration levels.

"Many times, growers will decide when to irrigate on visual factors above the ground, such as corn leaves rolling, the latest weather forecast or just a 'gut' feeling," he explains. "Our technology allows growers to view below the surface and focus on the plant-available water, and how much water the plant is consuming. We are providing eyes and ears where the crop needs more or less water."

"Overall, the system allows us to wait on starting the sprinklers and signals when we have applied enough water to turn them off earlier than we might have by watering traditionally," Wappel says.

He has plenty of water, but energy costs are his main concern, he adds, noting why he agreed to work with local farm consultant Cassie Misch, of Platinum Ag Services, a dealer for CropX.

"Last year, Dad turned on his sprinklers two days before our monitors told us to water, and by waiting that two days, we caught a rain and saved roughly $5,000 to $6,000 across the farm in pumping costs," Wappel explains. "It was the difference in running 15 sprinklers instead of 40 over two days, and it made a significant difference."

In addition to saving utility costs, Wappel saves considerable time managing the fields under the system and with the crop consultant's help.

"I'm running and gunning at all times, and we're still the 'guy and a half' we were five years ago when we had half the acres. It's nice to hire local, unbiased crop-consulting assistance such as Cassie's to take care of the agronomic things. The service has its costs, but in the end, the bottom line is served."

Alt says the efficiency of VRI and irrigation scheduling boosts an operation's profitability by consistently reducing inputs -- benefits that remain year to year regardless of fluctuations in the commodity market.

Most, however, install one or two sensors per pivot in representative areas of the field according to field maps or the grower's experience with the individual circle, she explains. "I usually meet with the grower to better understand their goals and current irrigation practices. From there, we determine together where to put the sensors, in which fields and how the process will work."

The in-ground sensors communicate cellularly to private Cloud-based servers and proprietary VRI software, which displays that information on the CropX website or mobile app, she says. "Our system can work with any brand sprinkler and is available in one stop shopping through CropX/CropMetrics. Our company supplies the hardware, the software and the service through a dealer network."

Wappel says he and his business associates are comfortable with the performance data they have on the system in corn and soybeans, and plan to move the soil-moisture monitors into the 900 acres of irrigated mint this year.

"We're still tweaking how we water the mint," he explains. "We're not after a lot of plant material, because that complicates our harvest procedure. The smaller plants seem to produce more oil and are less expensive to harvest.

"Typically, we stress the plants a week to 10 days to set more oil," Wappel says. "Also, mint generally pulls moisture close to the soil surface, so we must irrigate it more frequently but with less water. We'll learn, and the moisture-probe system will be a good tool in that process." 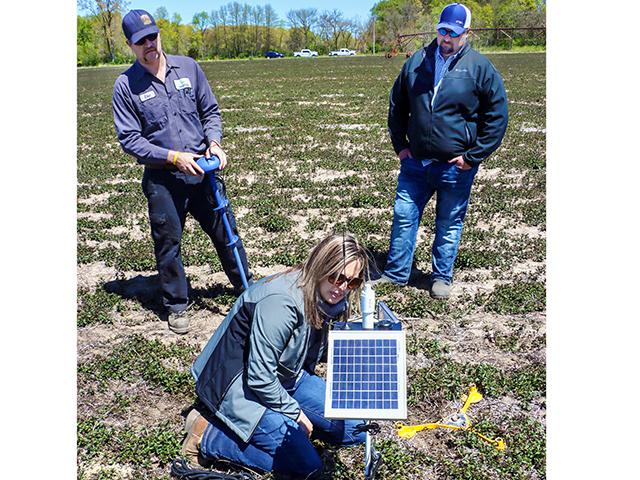