With two children at home and a pair of full-time, off-farm jobs, Rick and Debbie Matthys are enjoying the improved efficiency they've fostered on their grazing operation in far northwest Indiana. Rather than taking on more land and capital assets, they opted for working more intensively with four-legged harvesters to make more efficient use of inputs, rainfall and sunlight.

The couple, whose family has been farming near Valparaiso for more than 70 years, returned as newlyweds after college in 1999. By 2003, they stocked land adjacent to the original farm with six purebred Black Angus cows with the desire to build a cow/calf operation. Today, they own 230 acres of the original farm plus another 100 acres, and manage 45 to 50 Black Angus cattle and 20 to 30 domesticated elk.

Through word of mouth and social media contacts for private sales, the family sells 100% grass-fed beef and elk meat to consumers in the nearby Chicago metropolitan area. The cattle and elk enterprises provide genetics to other producers, while hunting preserves are a market for older bull elk. Elk antlers are used for furniture and dog chews.

"With cattle, the end product provides the only payday," Rick Matthys explains. "With elk, there are more opportunities to profit along the way."

Under the name Valmere Farms, Rick and Debbie, with son Hayden and daughter Morgan, also sell 100 gallons of maple syrup products annually from their native hardwood land and honey from on-farm beehives. Rick's father, Robert, supplies the bulk of the ranching labor.

The efficient grazing operation today is quite different from when the Matthyses started with their six Angus cows in 2003. "Our family has been rotation grazing for 10 years, but we really intensified the management three years ago," Rick explains. The family teams up with the Natural Resources Conservation Service in a program to develop water points that help fine-tune their grazing using flexible paddock sizes.

"Before that, although we were using rotational grazing, we found ourselves fighting invasive species," he continues. "We'd have to mow every summer to knock down multiflora rose and autumn olive. It was time-consuming [and] expensive, and it was costing us forage."

Now, in the third summer of the conservation program's intensive-grazing scheme, the summer barrage of brush is no longer a problem. "We now have 95% grass in our pastures, and that figure grows each year," Rick says. "Our pastures now look like a hayfield. We've used no chemicals or mowing in three years."

A decade of steadily intensified rotational grazing also allowed the Matthyses to discontinue antibiotics and dewormers on their cattle. "We get a calf up to 1,200 pounds in 16 months on pure grass," he says.

The elk have to be vaccinated and dewormed because they are susceptible to chronic wasting disease and brucellosis. "That's why they are always in separate pastures from the cattle, although we also intensively manage their grazing, too," Rick says.

Throughout their evolution of grazing management, the family has seen improvements in pasture productivity along with better forage utilization. "We've been slowly increasing our herd size, as we see the land will support it," Rick explains. "We averaged around 30 cows for several years, but this past year, we took that to 40."

Two pastures, 13 and 17 acres, support the cow herd. Each pasture is subdivided roughly in half by permanent fencing, and Polywire is used to further subdivide those paddocks according to grass condition and stocking rates. "We generally put the cow/calf pairs on 5 acres for two to five days, then move to the next 5-acre paddock," Rick explains. In July, when forage growth slows, the paddocks might grow to 10 acres.

He works to leave 4 to 5 inches of plant height before moving the herd. "If they begin to outrun the grass, we'll move them into a larger pasture and supplement with hay until the grass catches up," Rick adds.

The elk graze a total of 16 acres divided into six paddocks. Each has its own JUG Livestock Watering station. The cow pastures are plumbed with plastic pipelines and JUG waterers.

"The improvements in animal performance and pasture productivity have been economically significant," he says. With the intensive grazing and self-watering systems, the family has more free time.

"It only takes about half an hour to move the cattle, and after they are accustomed to the wire, they generally move themselves," Rick continues. "Being trained to move with the wire also helps when we want to pen or work with them."

Valmere Farms recently was awarded the Porter County Conservationist of the Year Award for its stewardship of natural resources.

Rick says the honor is the result of deep conservation-oriented roots in his family. More than 50 years ago, his grandfather, Achiel Matthys, was a Porter County Soil and Water Conservation District Board member and was also active in conservation efforts on the farm. 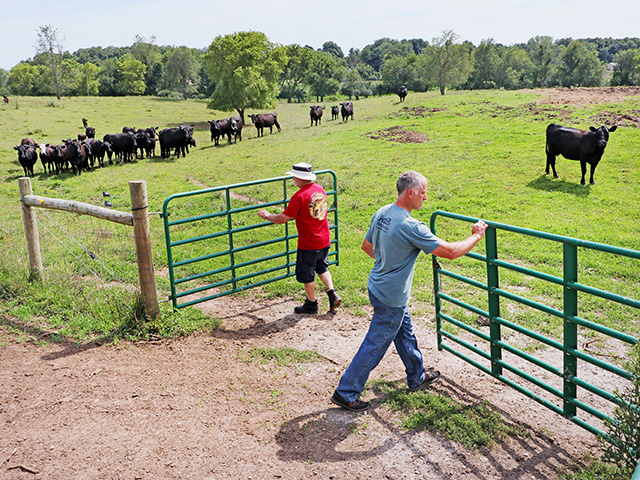