A series of new cotton traits are hitting or nearing the market, bringing with them improved insect control, more herbicide options and better livestock-feeding capabilities.

At least two of the traits, a novel Bt trait and nematode-resistant varieties, are available now. Two others -- a low-gossypol trait and 4-way herbicide-resistant trait -- are soon to come.

For more than 20 years, the Bt traits on the cotton market have only targeted caterpillar pests of cotton, such as the cotton bollworm. Now, Bayer has brought to market a Bt cotton variety that targets a completely different class of insects: biting and sucking pests, namely tarnished plant bugs and thrips.

Also known as lygus, the tarnished plant bug has long been one of cotton growers' most damaging pests. In 2018, it cost growers an estimated $175 million across the U.S., according to Mississippi State University's annual cotton crop loss study. The study ranked it as the second most damaging cotton insect, just behind bollworm. Thrips was another top contender, costing growers an estimated $67 million in 2018.

Full commercialization will hinge on some import approvals from certain key export markets, including Mexico, which haven't yet approved the product's multiple GM traits stack.

Cottonseed is a good source of protein for ruminants, but livestock such as chickens and pigs have long missed out on it as a feed option. Why? In a savvy evolutionary move, the cotton plant produces gossypol, a compound that helps protect it against insects and diseases, but is toxic for nonruminant animals and humans.

Enter Texas A&M University geneticist Keerti Rathore, who has spent more than two decades creating a low-gossypol cottonseed trait. With funding from the industry group Cotton Inc., Rathore used a genetic engineering technique called RNA interference (RNAi) to shut off the expression of a key cotton gene, but only in the seed. The cotton leaves, bolls, roots and stem all still contain the valuable gossypol protection, but the seed has extremely low levels of the compound.

The trait, TAM66274, has made its way through the U.S. regulatory system, with USDA deregulating it in October 2018 and FDA signing off in October 2019. Since some cottonseed is exported, however, securing import approvals from international trade partners is next on the docket, as is finding a commercial seed company to license the trait and create varieties with it, Rathore explains.

Even without import approvals, Rathore believes the trait could be stewarded to avoid export markets by sending the cottonseed protein directly to domestic livestock operations. The cottonseed oil would not contain any trace of the genetically modified (GM) trait and would be free to enter the commercial oil market, he adds.

"We are still knocking at the doors of seed companies here in the U.S.," Rathore says. "[We are] also looking at the humanitarian use of this technology in poor countries." See more on the trait's features at https://www.tandfonline.com/…

Now, BASF is preparing to add a 4-way herbicide-resistant cotton trait to the market, which adds tolerance to an HPPD herbicide to the mix, says Bryan Perry. U.S. head of seeds and traits at BASF.

Branded as Axant Flex, the new quad stack offers tolerance to Alite 27, a formulation of isofluxatole, for preemergence or early-postemergence applications. The HPPD-tolerant trait will be stacked with glyphosate, glufosinate and dicamba tolerance, and some new varieties will feature TwinLink Plus, which offers three Bt proteins that target caterpillar pests.

Although the trait is fully deregulated with USDA, BASF is awaiting new Alite 27 labels from EPA, which will permit use on Axant Flex cotton. Those are expected to land in the early months of 2023, so the company expects a limited, stewarded introductory launch of Axant Flex varieties via its FiberMax and Stoneville brands that spring, Perry says.

Another holdup is the lack of import approvals from Mexico, which won't stop full commercialization but could limit BASF's ability to scale up production, he adds. "We're looking at a full but stewarded commercial launch in 2024, assuming we still have the Mexican bottleneck," Perry explains.

The only nonbiotech trait of these new cotton varieties is PhytoGen's native trait that supplies resistance to reniform nematodes. Four PhytoGen cotton varieties in 2022 will have this native reniform-resistant trait, in addition to two older native traits that give cotton resistance to root knot nematodes and bacterial blight, says Joel Faircloth, Corteva Agriscience U.S. cotton portfolio manager. "They are yield-stabilizing traits," he explains. "When you are in good conditions with these threats, you still get that high yield. But, when you're in tough conditions where you do have these problems, they will also yield well."

The traits will be stacked with Enlist technology for glyphosate, glufosinate and 2,4-D choline tolerance, and WideStrike 3, which contains three Bt proteins targeting the bollworm. 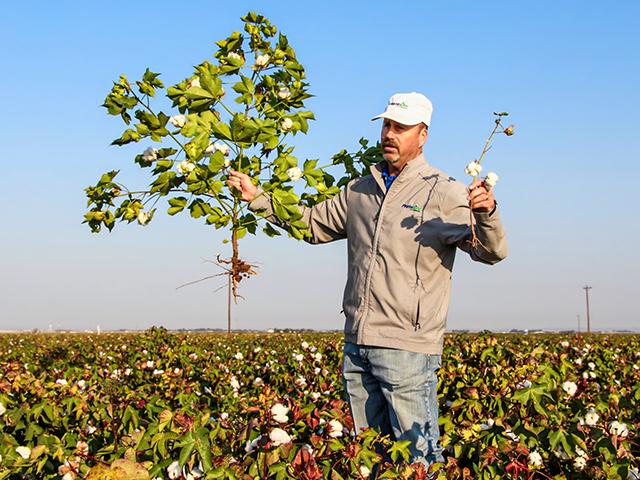