For the average cow/calf operation, cull cows play a key role in yearly income. Maximizing this source of revenue means treating the cull side of the business with the same level of care and outlook as the calf crop, an annual bull sale or replacement-heifer marketings.

Seasonal price patterns for slaughter cows historically show the widest price movement of any class of cattle. Prices start trending down in September after marking highs in a seasonal pattern that usually hit around May. Operators can be faced with out-of-the-ordinary pricing scenarios when something like widespread drought pushes liquidation. At press time, large portions of the West and the High Plains were experiencing moderate to exceptional drought conditions, potentially shifting cull market trends this year.

To "cull" doesn't have to mean to sell for slaughter. That's important to consider, says DTN livestock analyst ShayLe Stewart, considering the highest value for one producer's culls is often as another producer's new herd members.

"We've been able to get more premiums for culls if we don't sell them when we wean in the fall," Stewart says about the cow/calf operation she and husband, Jimmy, run near Cody, Wyoming.

"There's no line, no age when we automatically let a cow go as a utility cow. If she weans off a poor calf, if she doesn't breed back, then she's clearly become less productive. But, we let her tell us that. We want to get as much age and use out of a cow as possible. Turning them over at 8, or even 10, years of age can mean lost productivity. My parents have made a whole business off of short-term cows. Give them ample food, and you can get another five years out of a cow like that."

Once a cow is no longer a good candidate for rebreeding and sale, Stewart says it's still important to differentiate your operation's commodity and to understand seasonal timing. This year, she notes many cows were sold earlier than normal, but she still expects the typical influx of cull cows to go to town in the fall.

"This year, the biggest driving factor as producers consider whether to hold cows over into spring will be the availability of feed," she explains. "For some, that opportunity may not exist given early drought conditions we've seen set in this spring."

Early in June, Stewart noted drought conditions in North Dakota were unprecedented, with some 1,000-head pair specials having already come up for sale in the state. She called these "market shocks," with ramifications likely reaching into 2022 and beyond.

"If you're in North Dakota or Montana, for example, you might want to ship to a sale barn in Nebraska or further into the Midwest, where feed is more readily available -- whatever market will give you higher dividends," she says. "We need to be willing to not just do what we have always done but to look outside to other areas where the market is more rewarding."

"We have this balancing act ahead of us in terms of how to manage costs and risks for the short term, while at the same time protecting ourselves from paying astronomical prices for cows later. Get creative. Look at some outside leases, haul some water, do whatever you need to do to keep as many cows as possible. Because on the back side of this, prices are going to be up."

There are ways to lighten the load if you want to carry cows to the other side of this market. The first key is to know what it costs your operation to carry a cow through the fall and winter. Every operation is different. While it's true that feed and hay costs are projected higher moving through the season, some operations can hold and even improve body condition on cows if they have resources like standing hay, cornstalks or covers available for grazing.

In some cases, grazing cornstalks can cost as little as 50 cents per head per day, or about $75 per head over a 150-day winter feeding period. Considerations here are labor and fencing costs, which will add to the cost of overwintering a cow. Historically in the Midwest, those costs (an estimated $20 per head in a 100-head herd) can pencil out to less than $100 per head for overwintering and profits of around $300 per open cow.

This year, carrying costs will fluctuate greatly depending on operation and region. Some producers, especially in portions of the East and Southeast, will be able to utilize standing hay, such as is promoted in many state's "Graze 300" programs. These programs help producers manage toward a goal of providing 300 days of grazing for the cow herd, utilizing rotational-grazing practices to maximize hay production and stockpiling.

For number crunchers, three years of data on cull-cow management may put a finer point on that pencil. The Noble Research Institute, based at Ardmore, Oklahoma, released a study in 2019 that took place over three seasons. The study looked at 244 open cows. At weaning, all were weighed, preg-checked and tested as open. They were given body condition scores (BCSs) and sorted into a thin group (BCS of less than 5.5) and a moderate group (BCS greater than 5.5). Each month, they were weighed, and their BCS was recorded. Feed rations were developed for both groups with a goal of getting them to a target BCS of 6. At the end of the retaining period, a USDA cow grader gave a dressing percentage and USDA grade to each cow. Those grades are lo-lean, lean, boning utility and breaker. The two groups were exposed to rested, BSE-tested bulls, two for each group, for a 60-day breeding season. BSE stands for bovine spongiform encephalopathy.

On average, those cows retained past weaning for 165 days, and 85% of open cows were successfully bred. Average BCS among all cows, years and management groups went from 5.53 to 5.93. Looking at selling all cows using slaughter-cow prices from the USDA Agricultural Marketing Service market report, net return was negative all three years when comparing the average cow's value at weaning and her net return after feed, labor and operating capital costs. Sales were in the spring, and per-head losses ranged from $166.96 to $104.99 for the thin group and $282.44 to $94.46 for the moderate group. The numbers were more positive where the first year's group of cattle (less than 6 years of age) were sold bred via video auction. All other years, bred and open cows were sold at Oklahoma City National Stockyards. The study considered additional costs, including breeding bull ($10.80 to $28.27 per head) and pregnancy tests ($6 to $6.92 per head). Net returns on the thin group went from a gain of $397.37 per head to a loss of $89.09 per head. In the moderate group, the range was from a gain of $287.96 to a loss of $177.22. The gains were largely seen the first year, when a video auction format was used for sales, and the overall cattle market was higher. 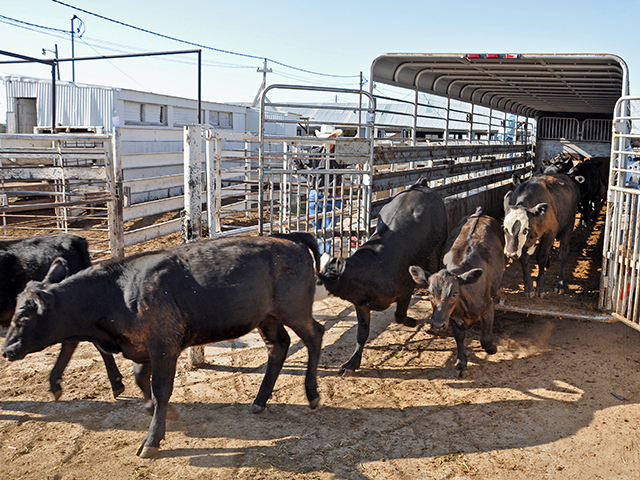