To create a profitable, long-term career in farming, Virginia's Drew Carter came to believe he needed to ignore much of the conventional wisdom involved and follow his own path. He stopped growing modern corn hybrids and instead focused on heirloom varieties -- either existing or new versions he's bred himself -- to sell almost exclusively to distilleries or breweries.

In so doing, Carter had to let go of today's standards for yields, pest control, fertility and risk. Amid the lush green pastures of the family's hilly southwest Virginia farm, near Castlewood, he shows a small 5-acre field of Bloody Butcher corn -- so named for the dark red hue of its mature kernels.

"Bloody Butcher is a huge ear of corn," Carter says. "Last year's stalks measured an average of 13 feet, 8 inches, so strong winds blowing them down is an issue."

Even getting a plant to grow from seed is risky. The germination rate on Bloody Butcher is spotty, and Carter considers it a success to get 65 bushels per acre.

So, what is the upside to growing a corn such as Bloody Butcher? In Carter's case, it's the premium he can charge for the milled corn. He generally receives the equivalent of $2 to $4 more per bushel than commodity corn.

As for a distilling company or a brewery, these corns lend certain flavors and qualities to the finished product -- qualities that can also be used to set their beverages apart from the competition.

"Bloody Butcher lends a fruity, floral flavor note," Carter says. "Hickory King White, on the other hand, has a starch content that's through the roof, which is more bang for your buck in the distilling and brewing industry."

He pulls one of the still-maturing Bloody Butcher ears from the stalk and peels back the husk. The kernels are mostly creamy white, with each sporting a tiny red dot. By the time these ears are harvested, the kernels will be almost entirely blood red in color. Interestingly, it's believed Bloody Butcher was developed by pioneers in the early 1800s not far from Carter's farm as a cross between white- and red-hued corns.

In growing these specialty corns, as well as wheat, barley and rye, Carter is driven by finances, not ideology. Much of southwest Virginia is remote from a crop-marketing standpoint. Were he growing commodity corn, one of the nearest viable markets is several hundred miles away in northeast Alabama.

Over the years, Carter has tried multiple enterprises -- growing produce in greenhouses, pumpkins and decorative "Indian corn." He has also sold beef from their herd on a whole or half basis. All these ventures had limited success but not the return for which Carter, who is the only full-time employee, had hoped.

"I was originally going to do beef cattle for the rest of my life," Carter explains. "I still do raise cattle, but the topography and size of the farm (300 acres of pasture, crop fields and timber) limit the scale needed for a full-time living."

In 2016, when Carter was still growing Indian corn, an acquaintance in nearby Lebanon, Virginia, who was opening a distillery, asked Carter about growing corn and other grains. The idea, both agreed on, was to try and use Bloody Butcher and Hickory King White for their flavor profiles, as well as their origins in the area.

"We'd be growing heritage corns in the region where they were developed," Carter says. "Now, our location is no longer a hindrance but an aid to marketing."

That was the beginning. This small piece of business caused him to look around at the marketplace for what he could grow.

"By law, to be called bourbon, it has to have 51% corn in the process," Carter explains. "It seemed crazy that everyone would be using the same commodity corn. Shouldn't there be more options?

"I realized I didn't have any competitors and thought that's a good business to be in," he continues. He prepared postcards with information on the business and the grains he could provide, then sent them to distilleries and breweries located roughly along Interstates 81 and 26 in several states.

"I only got one reply, but it was a good one," Carter says. North Georgia Still Co., located in Dahlonega, ships nationwide the components that can be used for distilling. Turns out, their customers were also asking the company for sources of feedstock grains to use. Now, customers of North Georgia Still can order milled grain from the company, and Carter fulfills the orders by shipping direct from his farm.

North Georgia Still remains one of Carter's biggest customers -- along with craft distilleries in Chicago, Kentucky and Tennessee. Perhaps not surprisingly, once involved in growing heritage varieties, Carter undertook to breed his own corn to help alleviate issues with low germination rates or plants whose height makes them more susceptible to high winds.

Rich Mountain and Sir Charles are two varieties that Carter has recently developed. He grew about 3 acres of each this year. "The germination rates have been phenomenal compared to straight Bloody Butcher," he says.

How available are these corns going to be in the industry? Limited, for now. Carter has gotten positive feedback from several distilleries and well-known "moonshiners" who tested Rich Mountain and Sir Charles. But, he is contemplating establishing his own local distillery that would use these corns for feedstock and flavor profiles not available anywhere else in the country.

"If you're the best at what you do, then your geographical location doesn't matter," Carter says. "People will find you at that point."

That heritage is part of the C&H Solutions LLC name, with the "H" standing for Hartsock. In years past, their herd was strictly Angus, numbering up to 140 head. The numbers have been trimmed as the heirloom corn business has prospered, with a herd of about 60 with the registered animals separated from Carter's commercial herd.

In the years since, Carter's father, Roger Carter, has run two successful businesses, one of them for mining supplies. Drew Carter has leaned heavily on his father for business advice and support.

"My dad taught me to treat everyone the same, small or large customers," Carter says. "Whether you're a multimillion-dollar distillery or a guy with a keg still in the garage, I'll treat you exactly the same."

-- To learn more about the corn, cattle and product line of C&H Solutions, visit https://www.candhag.com/… 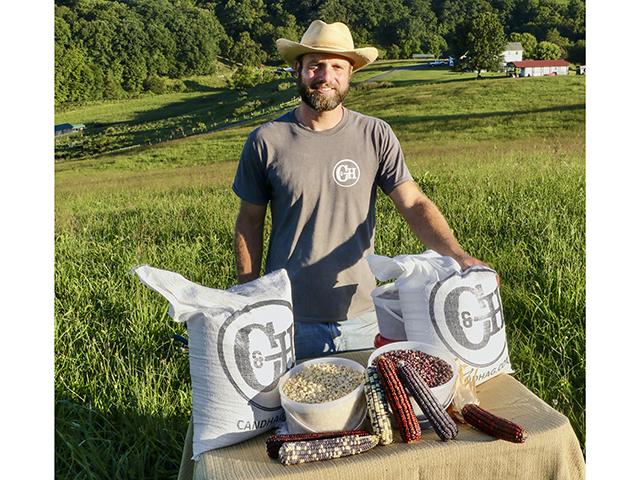