Some days, Viren Popli says, there are tires on hand at the assembly plants but no wheels. And, some days, there are wheels but no tires. Some days, the President and CEO of Mahindra North America Ag says, they have both wheels and tires, but no vehicle bodies to install them on.

There are shortages of everything from labor to microchips, rubber to steel, problems that have greatly slowed manufacturing of all sort enough to raise the question: Is now really the best time for this?

"There was a lot of discussion on whether we should do it now or wait," Popli says.

The way the company has managed the release sheds insight into how manufacturers are handling unprecedented times while progressing with plans. Using limited releases, narrowing the possible models and options, and bracing for demand that can't be quickly met, companies are learning to weather the pandemic's ongoing ripples.

Rereleasing the Roxor was a priority for Mahindra after it had to pull its rough-and-tough side-by-side from the U.S. market in 2020. That vehicle's similarity to the classic American Willys Jeep was something Mahindra initially celebrated, but the likeness struck too close to home for Fiat Chrysler Automobiles, which owns the rights to the "Jeep trade dress."

So, a whirlwind redesign by Mahindra produced something different enough to get a stamp of approval from the courts. It wasn't gone long, but the world the Roxor came back into was far different from the one it left.

"I had to weigh this on both the supply chain side as well as considering that this is a thing we've been working so hard at and something my people on the shop floor were waiting for," Popli says. "I needed them to get back to work, to get people on track, and if you wait too long, sometimes you don't have anyone to do it."

In a perfect world, Popli guessed, the Roxor may have been released three or four months before its November unveiling. The company decided to pull in the reins, however, to let a stock of parts accumulate.

"We just needed to make sure our supply base was set up and our parts supply firm and robust," says Rich Ansell, vice president of marketing for the Roxor brand. "November probably isn't the ideal time to be launching a product like this, but there was pent-up demand, and we didn't want to wait any longer."

Mahindra is employing several strategies to try to make an effective release given the restricting issues.

First, it launched the vehicle at just 71 of its 500 total dealers.

The vehicle also launched with limited options. There were just two colors announced, red and black. And, there were just two trim models, a base and a cabbed version that includes an 8,000-pound winch and heat and air-conditioning.

That limits the potential options to four, where similar vehicles from competitors might launch dozens.

"Let's say the market wants 100 of your product, and you can only produce 70," Popli says. "You want to satisfy the largest chunk of that marketplace. When you have the potential to supply 110, and the market only wants 100, that's when you're going to create more options that might excite the fringes of your market. We're entering a marketplace that's quite constrained, so we want to address the bulk of the market."

Red and black accounted for 60% of the sales of the previous Roxor, so those are first colors built this time.

The company also used its Roxor redesign window to consider the wide array of accessories it sells, everything from a $19,575 system to convert the wheels to tracks to $38.61 racks to hold shovels. It eliminated poor selling options to help streamline manufacturing.

Those decisions might help address the parts shortages, but for labor shortages, the company is preparing to tough it out with the employees it has.

It expects to be producing Roxors at about 50% of full capacity initially with hopes to push to higher production rates in the spring.

"The labor situation is not going to go away," Popli says. "The biggest situation we're facing right now is labor, the availability of people, and that's before the trillion-dollar investment in infrastructure. So for us, it's very important we utilize the people we have to get things started."

It's all a part of a bet Mahindra has made that despite challenging circumstances, this is the time to bring Roxor back.

The Mahindra Roxor is new again, but the team behind the side-by-side says what's under the hood hasn't changed.

The 148-inch length, 96-inch wheelbase, 60.7-inch width and 9-inch ground clearance, and 2,990-pound base-model weight are all similar to the original.

The company has, at least temporarily, done away with an optional automatic transmission, fitting both of its two available models with a selectable 2- or 4-wheel-drive five-speed manual transmission.

Most changes are to the outside, where the front end was entirely overhauled, including expanded wheel wells, emphasizing the company's focus on building a working machine for daily use.

"If you look at it from the side, it reminds you of a six-shooter," explains Viren Popli, president and CEO of Mahindra Ag North America. "We completely redesigned the look and feel of the product."

On the dirt, the Roxor feels stable and solid on gravel roads and rocky trails. The engine braking is enough that some can get away with barely even touching the actual brake pedal. The transmission, meanwhile, is forgiving, even for the "but I don't normally drive a stick" crowd. 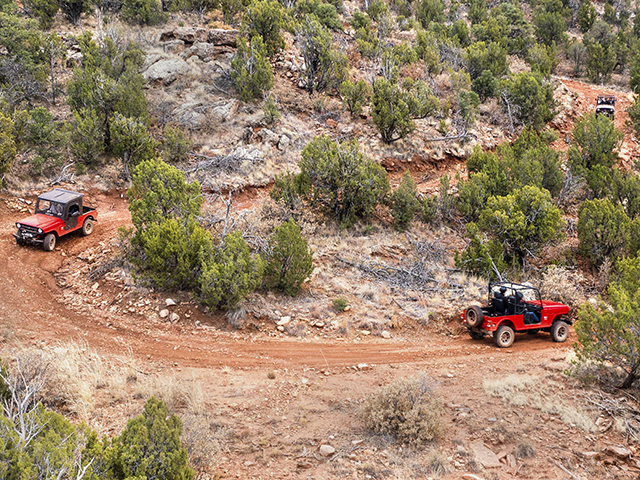