Steve Arnold has always been a bit of a geek for technology, constantly on the cutting edge.

When his wife, Kathleen Arnold, was put on bed rest while pregnant, Steve bought a cell phone so he could stay in touch. That's a normal enough reaction today, except it was 1984. Back then, it cost $2,500 and weighed so much it nearly tore the back pocket off when he shoved it in his jeans.

He's long applied that same eager approach to his family farm in southwestern Kansas, a wheat- and milo-focused operation where it never rains enough, and an extra couple of bushels per acre can make the difference between a good and a bad year. Arnold has been an early adopter of plenty of technology that is now common, and on plenty that never caught on, as is evidenced in the wires, screens, brackets and sensors cluttering the corners of his shop.

The combine-mounted protein monitor Arnold has been using since the summer of 2019, however, won't be going to scrap pile anytime soon. Rather, he says the device has benefits in both the short and the long term, and researchers say similar sensors could be on the way to many more combines.

"We're seeing a lot of value in the information we're getting from it. We're excited," Arnold says. "We've now run it two wheat harvests and three milo harvests, and the technology is solid."

Even in an era overflowing with information, detailed protein maps can offer something different, such as important long-term nutrient-management insight and real-time harvest protein information that provides valuable short-term marketing options.

Those short-term benefits were on Arnold's mind as he guided his Case IH 8240 through his wheat early last June ahead of a mounting thunderstorm.

He'd installed the Next Instruments CropScan 3300H system himself but had help from the family-owned Australian company in calibrating the equipment. The system, which runs about $20,000, consists of a sampling head and a near-infrared spectrometer mounted to the clean grain elevator, which connects to an in-cab touch screen tablet.

It provides measurements for protein, oil, starch and moisture every 5 to 12 seconds during harvest for a range of grains, including wheat, milo, barley, rapeseed and soybeans.

"We're using the same tech used in elevators, but this is the first one on the combine," says Victoria Clancy, who heads up the company's North American efforts.

The data is combined with GPS information and overlaid on a field map as the machine rolls.

The system computes an average for each load, and a software component can help a farmer keep high- and low-protein grain sorted from there. Arnold carefully directs each load as he works his way through the field, separating his top protein wheat.

He finishes harvest with about 10,000 bushels set aside and nets a $0.38-per-bushel premium when he sells it in October.

"It can be a revolution in terms of providing farmers the ability to segregate high versus low protein in the field," says Ignacio Ciampitti, a researcher at Kansas State University (KSU) who sees protein-sensor innovation coming for farmers on several fronts.

As nice as a protein premium can be for farmers, some see perhaps even more benefit in the data map produced as the crop is harvested.

It's a use that even initially escaped the team of engineers at Next Instruments.

"When we were first developing the technology, we were working with an agronomist, and we were discussing the tech, how to market it and what the benefits could be," Clancy says. "He turned to us and said, 'What you really have here is a nitrogen measurement tool.'

"Knowing the protein is great," she continues, "and if you can get more money with specialty contracts, that's fantastic. But, if we can measure the protein, we can see how much nitrogen has been pulled out of the field, and we can start looking into nitrogen replacement maps."

That kind of information has been a bit of a Holy Grail for the ever-innovating Arnold. He used to load dozens of small, plastic sample bags into his combine cab and stop regularly to fill them. He'd hobble out of the cab at night with arms overflowing, test the grain for protein then try to match the bags back up to a particular zone so he could have some guidance when it came to the next season's nitrogen application.

"We've been kicking protein ideas around and working with variable rate and different management zones for 15 years," Arnold says. "We knew different soil textures raised different protein levels, knew there was a lot of variability in the field. Now, we can map it on the go, and we have hundreds of samples."

The protein-sensing potential for this technology also goes beyond the combine.

KSU's Ciampitti has worked with John Deere on a combine-mounted sensor but is also studying the ability to use multispectral cameras aboard autonomous aerial drones or high-clearance equipment, or even using high-quality satellite data, to assess a field for protein while the crop is growing.

"A combine sensor can give you information when you harvest, but it will not tell you a prediction; and we want to make a prediction so you can manage for it," Ciampitti says.

The variables that come with a growing crop have proven a significant hurdle to meaningful in-season readings. A timely rain or late dry stretch can change everything about the expected protein output.

"The aerial imaging isn't as accurate as an on-the-go harvest sensor, but it could be enough," says Peter Kyveryga, with the Iowa Soybean Association.

Ciampitti and Kyveryga are working with Planet Labs Inc. on a satellite solution to map protein and oil in soybeans that could resolve some of the issues.

The ability to consistently produce high-protein soybeans could be a major help in building export business, and in-season readings could allow producers to make better harvest and marketing decisions.

Kyveryga says soybean quality got left behind somewhat in recent decades as yield was prioritized. Researchers say the same is true for wheat, corn, sorghum and canola. There could be big benefits in changing that.

"About half of United States soybeans go for export, and those customers are asking for quality," Kyveryga says. "As the quality of U.S. soybeans lowered, they would rather buy soybeans from South America; so there were a couple of strategic issues."

LOOKING FOR AN EDGE

Farmers in some regions may be getting more of an opportunity to cash in on their protein, especially in the Southern Plains, where higher-protein wheat hasn't always been rewarded with a premium by local elevators and co-ops.

"For a long time, the one time a bushel of wheat would sell without a protein value associated with it is when a farmer would haul it to the local co-op," says Justin Gilpin, CEO of Kansas Wheat Commission.

"The co-op sells it to the flour mill, and it would have a protein value associated with it; or when it gets sold as an export, it has a protein value," he continues. "That disconnect is starting to evolve.

That's part of what a farmer like Steve Arnold is trying to tap into with his latest foray into a new technology.

He had irrigation on his fields until about 15 years ago, and he had to become a different kind of farmer when the water dried up -- more careful about how he allocates his resources, more deliberate about growing a better crop.

Every bushel counts, and every cent matters.

"I'm just trying to capture a little more margin," Arnold says. "I've about used up all my other alternatives as a dryland wheat and sorghum farmer, so I need to produce better quality to compete, and I have to do it at a competitive cost. This tool is helping me get there. 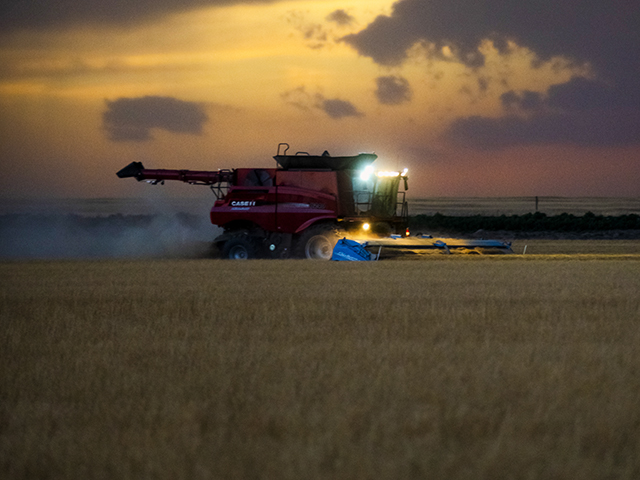