The dominant large-scale weather feature in the last several months has been the presence of a cool-water La Niña event in the equatorial Pacific Ocean.

Commodity markets, particularly corn and soybeans, surged to multiyear highs during this winter season, with fears of lower production from South America because of La Niña contributing to this rally.

The market has had good reason to be concerned. DTN contributing analyst Joel Karlin dug into the statistical relationship between La Niña and subsequent production in Argentina, and found some noteworthy details.

Karlin used a three-month running mean measurement of central equatorial Pacific temperatures known as the Oceanic Niño Index (ONI) for his inquiry. In this benchmark, a value of minus 0.5 is the threshold for La Niña, with more negative numbers indicating a more intense La Niña event. He found that the three-month ONI for September through November 2020 was a minus 1.2. "The three-month average reading ... for the September through November 2020 period ... is the lowest ONI reading since January 2011 ..." Karlin notes. "One can see that often in La Niña years, Argentine corn and especially soybean yields come in below trend, sometimes significantly so."

The statistical correlation between the Argentina production numbers and the yearly averages of the Oceanic Niño Index is strong. Karlin found a correlation value of 39.1% for Argentine corn and a very high 46% for Argentina soybeans related to negative ONI values. The story is much different for Brazil production: Brazilian corn output has only a 13.6% correlation, while Brazil soybean production actually has a negative 15.6% correlation to La Niña. "Some of the best Brazilian soybean yields have occurred in La Niña seasons," Karlin notes.

Varying relationships to La Niña in Argentina and Brazil can be explained by the dramatic change and relocation of Brazil's crop production during the past 20 years. The largest Brazil crop-production state, Mato Grosso, is in a subtropical climate; Mato Grosso is in central Brazil, where production has migrated during the past two decades. Previous top production states of Rio Grande do Sul and Paraná are in southern Brazil and in closer proximity to Argentina. Rio Grande do Sul and Paraná have shown more susceptibility to reduced yields in La Niña seasons.

Projections for the life span of the current La Niña event indicate a weakening during the first half of 2021 and the Pacific equatorial temperatures to reach normal status during the second quarter of the calendar year. However, by then, La Niña will have been around long enough to do its work in affecting those Argentina yields. The question that may linger all the way through South American harvest is: How much of a reduction will we actually see? 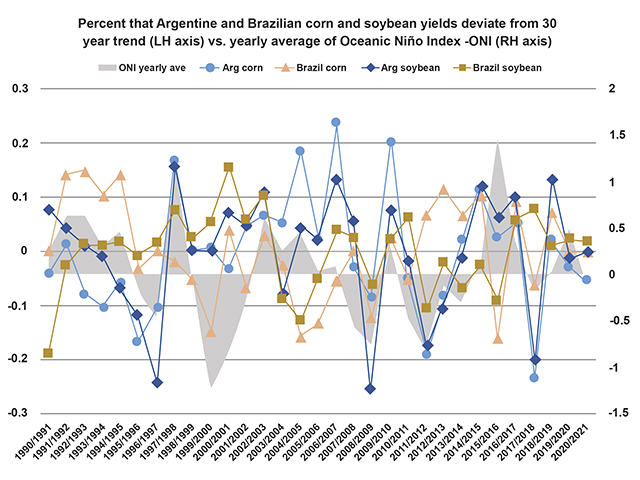