The fire came not as a wall but as fingers, long tendrils of flame blitzing across the just-greening pastures and still-dry creek beds one early March in south-central Kansas. Sometimes, the flames flew at more than 80 miles an hour, and while the wind wasn't driving them that fast by the time the fire came to Mark Lohrding's corner of southern Kansas, March 6, 2017, the fingers shot around his house and across his ranch all the same, threatening to pull into a fist and grab everything he had -- his family, his cattle, his entire ranch.

The calamity and the fear of that day still linger in Lohrding's voice when he tells the story three years later, which makes one of his primary takeaways from the near-run experience all the more astonishing.

"I never liked fire," Lohrding says. "That fire, I felt so helpless. But, now, well, I think we need to start burning part of the ranch."

The fire burned off plenty -- 7,000 acres of grassland, half of Lohrding's four-year stockpile of hay and 26 miles of fence. But, it also burned away cedar trees that, despite persistent efforts to curtail them, littered his property, sucking up far more water than he had ever imagined.

Now, Lohrding is amazed at what the fire left in its aftermath. There seems to be water everywhere, creeks running deeper than he can remember and ponds fuller than he expected in years wet and dry.

"We get enough rain out here to get by," he says, "but barely. If we lose efficiency to woody species, I'm not sure it would work. That fire made me realize without management of those trees, we're not going to continue to be productive enough to make a living."

Research shows Lohrding is right to be concerned. Livestock production can drop by 75% in grasslands overtaken by fast-growing woody species, according to a study by Oklahoma State University professor Samuel Fuhlendorf.

Aggressive cedar trees and other similar species can quickly choke out grass and suck up debilitating amounts of water. Controlling their spread can change the face of a farm or ranch.

"Once a rancher has a cedar problem, it tends to be the biggest problem they have," University of Nebraska professor Dirac Twidwell says.

Cedar trees are native to the region, so they're not a species invading unchecked by any adversary. The only problem is their main adversary has always been fire. Regular and raging blazes 500 years ago kept the trees in check and the grasslands clean.

The settlement of the region changed that.

"The Great Plains was one of the most frequently burned areas on the planet for thousands of years. Indigenous people used fire to manage the resource," Twidwell says. "Now, we tend to put fires out."

On top of that, millions of the trees have been planted in the last 100 years and are a staple of shelterbelts. The state of Nebraska has been distributing saplings since 1926 and handed out more than 1.5 million eastern red cedars and Rocky Mountain junipers in the 1980s and early 1990s alone.

Adam Elliott, a USDA district conservationist, based in Ashland, Kansas, has been on the front lines of the battles against both wildfires and invasive trees.

As terrible as fires can be, he says they can also be an asset as long as controlled burns are carefully planned.

"The first step is education," he says of preparing for a burn. "That means going to talk to people who've done it before and getting educated on what it actually takes to do it safely."

That's one place his office can step in. He works with ranchers for as long as five years to prepare for one burn. One of his first tips is cutting trees -- highly flammable -- away from structures and property lines to help limit the potential for fire to spread, no matter if set on purpose or naturally.

Six months out, he advises ranchers to be preparing firebreaks, mowing, disking and working on other ways to prepare areas where the fire is supposed to stop.

"The difference between a successful burn and an unsuccessful burn is how far ahead you start," he explains. "If you only start preparing two days ahead, I'll probably be out there with the fire department putting it out for you."

The 2017 fire didn't spare much of Lohrding's forage, but it spared what mattered the most -- his family, their home and his cattle.

"We're not supposed to say this anymore, but it was an act of God," Lohrding says of a timely shift in the winds.

Still, it left more than ash and amens. It left him determined to learn to use controlled burns. He joined a local burn association and is looking ahead to using fire to manage his land in the future.

In the meantime, he's looking to take advantage of the newfound water. He had about 700 head of cattle when the fires came and sold down to 450 during a nasty drought that ensued. But, the excess natural resources helped him increase his herd to 840, and he now figures he can carry even more than he did previously.

"Before the fire, I thought we were doing a good job," he says. "I didn't realize how much of a problem we really had." 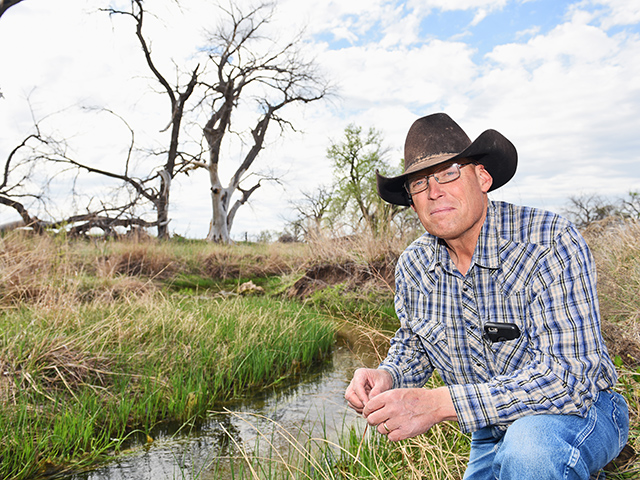