The U.S. could set national corn and soybean yield records in 2020, according to findings from the DTN/Progressive Farmer 2020 Digital Yield Tour, which is powered by Gro Intelligence. Conducted from Aug. 10 to Aug. 14, the tour forecast a national corn yield average of 183.9 bushels per acre (bpa) and a soybean average of 53.1 bpa.

While Gro's yield models update daily, the Digital Yield Tour's estimates represent a snapshot in time. That snapshot does not include the impact of the Aug. 10 derecho, which slammed roughly 33.7 million corn and soybean acres across Illinois, Indiana and Iowa, some with hurricane-force winds.

"The impact of an unexpected weather event during the Digital Yield Tour was a challenging but intriguing thing to assess," says James Heneghan, Gro Intelligence vice president of agribusiness. Using county-level yield data, Gro estimates that at least 3.5 billion bushels of corn and 936 million bushels of soybean production potential stood in the path of the storm and could be subject to further reductions.

While storm damage will likely take the top off yield averages in the "I" states, strong yields in the seven other states surveyed -- Kansas, Minnesota, Missouri, Nebraska, Ohio, South Dakota and Wisconsin -- may counterbalance some of the loss.

"After four days of seeing high, and in many cases, new state record yield estimates on the tour, the higher national yield is not a surprise," DTN lead analyst Todd Hultman says, adding that fall weather will also play a determining factor in how crops cross the finish line.

The best corn yields clustered in the northwestern corner, with another promising strip of production running through central Illinois from the Missouri border to Urbana. There, Gro's models suggest average yields will mostly land between 200 and 210 bpa, with Warren County pulling in the top yield estimate of 217.3 bpa.

Indiana could set a record if Gro's corn yield estimate comes to fruition. In the state's highest-yielding area, mainly north and west of Indianapolis, yield forecasts average above 200 bpa, with Tipton County topping the charts at 206.7 bpa. DeKalb County, on the northeastern border of Ohio, shows the lowest yield estimate, at 153.7 bpa.

Anderson says the state was largely spared a heat wave despite variable rainfall early in the growing season. An increase in precipitation in mid- to late July took the edge off budding drought development.

The weather pattern change could bolster the state's soybean yields, which, like corn, saw the highest average, 66 bpa, in Tipton County and the lowest average, 47.4 bpa, in DeKalb County.

Between drought and derecho, it feels like Iowa's corn crop has been through nine rounds with Mike Tyson. Despite the body blows, the law of averages maintains its reign, and the state's corn will likely exit the ring with respectable yields intact.

Jesup, Iowa, farmer Ben Riensche has seen everything. Parts of his farm could have the best yields they've ever seen. Other fields were flattened and defoliated. Flash drought conditions in western Iowa during pollination will limit yield potential.

"It's not a simple exercise coming up with a standard yield estimate like in the past," he says.

Soybeans' short stature helped the crop weather the windstorm, and the precipitation that came with it could help the state set a record yield. While most county averages topped 60 bpa, it's noteworthy that the lowest was only 50.7 bpa, in Clarke County.

Garden City is aptly named, at least this year, as strong yields in the state's southwest could push Kansas corn yields to a new record. Gro forecast yields in the region to range from 185 to 208.2 bpa in Meade County.

A full soil-moisture profile heading into the growing season helped corn pull through a June dry spell, and then Mother Nature turned on the spigot in July, DTN's Anderson explains.

On soybeans, the tour's 48-bpa estimate would match the record, but Barton County farmer Kyle Krier says there are unanswered questions, like whether August rains would be plentiful enough to sustain beans' lush vegetative growth.

"We're definitely still hopeful but remembering that we live in Kansas," Krier says.

Minnesota farmers got the crop in at a record pace, and "if you had to write a prescription for big crops, this year would have been perfect" as far as weather goes, says Faribault County farmer Mark Nowak. In the southern half of Minnesota, Gro's county yields start at 200 bpa and top out at 215 bpa, in Waseca County.

Missouri's best yield potential is concentrated in the northern third of the state and the Bootheel, where yield estimates span 170 to 190 bpa. The top estimate, 202.7 bpa, lands in northwestern Holt County.

While the state estimate is just 4 bpa shy of a record, timely planting progress and above-average rains in July could also propel soybeans to a new one.

As with corn, the best bean yields are found in the upper half of the state and along the Missouri River, from Kansas City to Columbia. In these areas, yields range from 52 to 60 bpa, with a top-yield award going to Atchison County, at 60.6 bpa.

Ample rainfall in the Cornhusker State will give dryland yields a big boost in 2020. "Even in irrigation-focused areas, it simply adds to production on pivot corners," DTN's Anderson says.

Some of the highest corn yields are expected from south-central Nebraska, where Gro pegs the highest yield in Phelps County, at 221.8 bpa, up 7 bpa from last year.

Kenny Reinke, who farms in Antelope County, calls it a much more normal growing season. Last year, soybean planting began in June. "This year, it was the middle of May for our latest planting. That makes a huge difference on soybeans."

Like corn, the south-central region boasts the biggest potential, with county yields in the high 60s.

Ohio could set a statewide record for corn yields despite hot and dry conditions in June and July.

The highest yields are forecast in the counties bordering Indiana, where yields range from 170 to 180 bpa. Darke County takes the highest honors, with an estimated yield of 181.5.

The soybean crop, on the other hand, looks outstanding, he says. Gro estimates west-central Ohio yields to range from 55 to 60 bpa.

"Corn looks absolutely phenomenal, and I think you can say that about the entire state of South Dakota," says Tregg Cronin, who farms in central South Dakota. Unlike last year's spring deluge, timely rains could propel the state to record yields, especially in the state's eastern third, where county averages range from 180 bpa to 207 bpa in Minnehaha County.

Like corn, the strongest yields are in the state's south and eastern counties, where yields range from 52 bpa in Davison County to 60 bpa in Moody County. South Dakota's northern tier of counties has the lowest yields, with averages in the 36- to 38-bpa range, as well as some of the highest prevent-plant acreage.

Wisconsin benefited from a distinctly drier start to the crop year, and favorable weather patterns have the state set to surpass 2016's record yield.

The state's best corn yields are concentrated in the southern third of the state, with another good pocket clustered along the Minnesota border south and east of Minneapolis. In those regions, yields mostly fall between 180 and 200 bpa, with Lafayette County boasting a top yield of 208 bpa.

Soybeans, which are on a path to match the state's yield record, also show the highest potential in the same region as corn, with estimates falling between 55 and 60 bpa across the southern third of the state. Yields become more variable as you move north, dropping into the 50s in central regions and the 40s farther north.

> You can follow the evolution of Gro's yield estimates by signing up for a free account at app.gro-intelligence.com/signup.

A crop year that started off with great promise will end in heartache for many Iowa farmers because of yield-slicing weather events.

The DTN/Progressive Farmer 2020 Digital Yield Tour, powered by Gro Intelligence, projected Iowa corn and soybean yields at 198 and 61 bushels per acre (bpa), respectively. But, that didn't take into account nearly 14 million acres of corn and soybeans in the path of a derecho on Aug. 10, according to Gro. Winds in excess of 100 mph flattened and twisted many corn fields in the middle third of the state. Hail accompanied the violent storm in some areas.

"It feels like one more nail in the coffin," says Tim Bardole, of Rippey, whose fields were ravaged by wind and ice chunks.

Extreme drought also plagued Bardole's farm -- along with all or parts of 11 counties in west-central Iowa -- in mid-August during grain fill. Most of the state was abnormally dry during that time.

A yield check of Bardole's "best" corn field after the storm, where only isolated patches of corn still stood, came in at 208 bpa. That's with only 2 inches of rain from June 1 to Aug. 1.

It's a reminder of what could have been, Bardole says. Crops were planted in a timely manner into soil full of moisture. He believes his corn and soybean yields would have exceeded Gro estimates if the weather cooperated. Instead, some fields are a complete loss, and yields will be half of Gro's estimate or less in others.

Randy Souder, of Rockwell City, feels fortunate his crops, though bone dry, are still standing. A mid-August corn yield check came in at 284 bpa, but he knows the average will be half that or less since many plants don't have ears, and low test weight is expected.

"The crops looked great early," Souder says. "Then, we got into July, and they tanked." 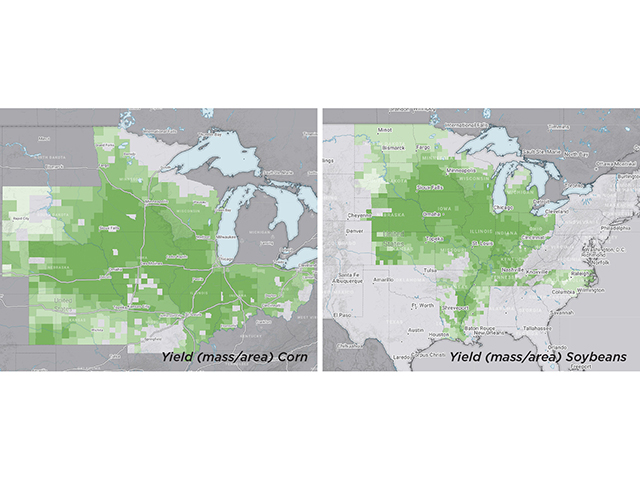