South Carolina's Woodard Farms has embarked on a value-added venture inspired by their child's dire illness, a hospital nurse's kindness and a mother's faith-inspired dream that their story -- and part of their farm -- be shared.

At the moment, the focus of that story (4-year-old Tobin Woodard) is racing across the farmyard along with his fraternal twin sister, Tyson, and their older brother, Tate, 7. All three are giggling and trying to run while wrapped in cotton throws made from a bit of the crop produced on the 4,000-acre family farm, in Darlington.

Tobin was a big reason his parents, Ty and Tracy Woodard, founded the company, Covered in Cotton, that has thus far manufactured several thousand throws. They sell them online and through a handful of retailers and wholesalers.

As important as those sales to the Woodards is the fact they have donated more than 290 of the throws to children's hospitals across the state in Columbia, Charleston, Greenville and Florence. For each 10 throws they sell, they donate one. Each throw comes in a box with a handwritten note from Tracy or Ty, and the packaging shares some of their story.

Their story began in December 2015, when then-3-month-old twins, Tobin and Tyson, were staying with Tracy's parents in Lexington while the young couple attended a conference for Tracy's job at the time. Tracy received a call from her mother that Tobin was running a fever but otherwise seemed fine.

Nonetheless, Tracy and Ty cut the conference short and returned to Lexington. Tobin had swiftly become lethargic and barely able to move. They rushed him to Prisma Health Children's Hospital, in Columbia.

Within an hour, they had a diagnosis. Tobin had bacterial meningitis, the most serious form of a disease that affects the membranes surrounding the brain and spinal cord, and those protecting the central nervous system. It can be deadly, and half the patients afflicted suffer long-term effects. The disease is fought primarily with large doses of antibiotics.

Tobin spent 35 days in the hospital. Tracy essentially moved into his room. Her parents helped care for the other two children. Ty split his time between the hospital and home. The farming operation was still reeling from the catastrophic floods in the region during harvest in October. To say the time was stressful would be an understatement.

Then, it got worse.

The day before Christmas Eve, Tobin began to have seizures, which prompted another MRI. It showed Tobin needed brain surgery -- right away -- to relieve fluid pressure on the brain and to treat infection.

The surgery was more successful than anyone anticipated. "You would have never known he'd been through anything the next morning," Tracy says. Still, they spent another 21 days in the hospital. Tobin received more rounds of antibiotics. His hair grew in, covering over two incision scars on his scalp. Tobin regained the ability to move his head. He rolled over for the first time in the hospital.

At one point prior to the surgery, a nurse who had taken care of Tobin in the pediatric intensive care unit brought a blanket to the family, one she had purchased herself. They were so touched that the blanket remained with them for the remainder of the hospital stay.

"It was incredible the people that loved on us that we never knew," Tracy explains. She remembered the kindness of that blanket long after they left the hospital, and Tobin continued to thrive at home.

STARTED WITH A VISION

Two years later, in a dream early in December, Tracy had a vision.

"I woke up and knew that we were supposed to make blankets or throws with our own cotton, what it was supposed to be called and what the logo would even look like," says Tracy, adding that "the Lord was doing a lot in my life."

She grabbed a notebook and wrote down everything. "I even dreamt about how the throws were to be tied into the story of our son. I took it to Ty and said, 'This is what we're supposed to do.'"

Even a career cotton farmer like Ty had no idea how to begin to make such a business happen. But, he also knew that Tracy, who didn't grow up on a farm and had a graphic communications degree, had been striving to contribute, to make her mark, in the operation.

It took about 10 months of research, calls, meetings, designs and, yes, some money before the Woodards had the first batch of Covered in Cotton soft, natural-colored throws delivered to their farm.

The 1,674 throws arrived on six pallets. Ty and Tracy took the throws home to their house one pallet at a time to fulfill orders. "After we put the kids to bed, we then go to work packaging the throws and processing orders -- most nights until midnight or after," Tracy says.

Though the Woodards love telling their story through these products, their venture has become a legitimate income producer. Tracy now works full-time on the business with a second part-time employee. The operation has been moved to a warehouse downtown with hopes to build a permanent facility on the farm.

In addition to the original throws, they've added a baby blanket and hand towel collections. Last fall, the business was named Garden and Gun magazine's Made in the South 2019 Winner. Within 10 days of the announcement, all the throws in stock were sold out.

They've gotten this far with the help and support of Ty's parents (Frankie and Connie) and Ty's older brother, Wes. The three families run the farm together. Additionally, Wes and Ty operate the cattle herd as a separate business. Wes also has a hay enterprise. Covered in Cotton has become part of the farm to them, as well.

"I thought this was a good idea of theirs," Wes says. "They are taking something we are already doing and taking it to the next level. I'm proud to be a part of growing cotton that's going into these products."

Covered in Cotton offers the farm a way to diversify while also connecting an all-too-distant public with what actually happens on the farm, Ty explains.

"This is a kind of coming together for others to see a bit of what we do," he says. "They say the average farmer feeds 154 people, and now we can say we are covering them, too, with our farm-to-family products."

As the sun begins to dip below the trees, we are a mile down the road from the main farm in a pecan orchard. The Woodard cow herd is grazing beneath the branches. The three children are excited to see the animals and thrilled that visitors want to do the same.

Eyes bright, son, Tobin, quietly takes it all in from the back of the pickup truck.

"When we came home from the hospital, we had been warned he would likely lose some or all of his hearing and vision," Tracy says, "and that he may not progress developmentally past 3 months of age."

Fortunately, none of that happened. "He's 4 now and has perfect vision and hearing." Then, in true Mom fashion, she adds: "He likes to act like he can't hear sometimes, but yeah, he hears fine."

Tobin smiles. Did he hear that? It's hard to tell. He smiles a lot anyway. Clearly, cotton throws aren't the only thing adding value to the farm. 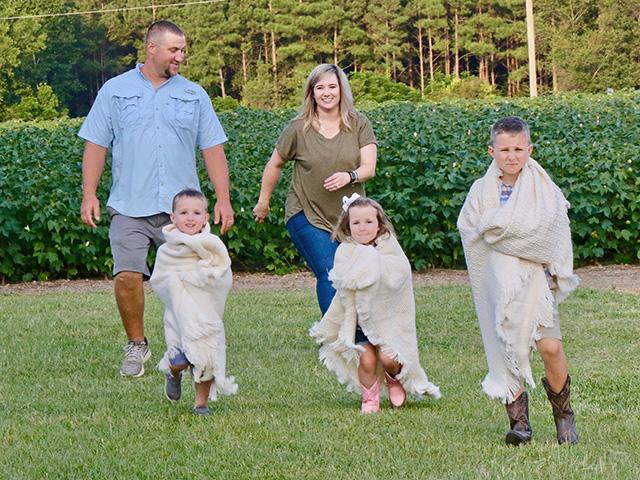