By 1983, Chuck Grimes was extremely frustrated with the Cimarron River's steady erosion of a 240-acre pasture on his cattle, hay and grass seed operation, near Hennessey, in central Oklahoma.

He came to battle the river erosion at the water's edge with an unlikely ally: Shoreline common reed.

"We'd watched as our riverbank land disappeared downstream every year since the early 1970s," Grimes says, recalling how, until that time, most riparian flood-control efforts on the Cimarron and the nearby Canadian and Arkansas River basins consisted of piling old car bodies on the channel-side banks of the streams.

"The unsightly automotive carcasses weren't very effective and caused eddy currents of floodwaters, which actually increased erosion around the junk. I was desperate to try something different," he explains.

Three years after the initial planting, Grimes says he was convinced the reed stand was well-established and it appeared the riverbank was beginning to silt in, giving him hope he might someday see his side of the riverbank pushing back into the channel.

Today, along the half-mile riverbank that had been sloughing off ultimately to find its way to Keystone Reservoir, downstream near Tulsa, Grimes proudly looks at the 50- to 100-foot ribbon of reclaimed land adjoining his pasture. Over 37 years, the reed held and multiplied, trapping enough silt during each flood to rebuild the riverbank and push the Cimarron's channel further into the center of the riverbed.

Across the recently formed "delta," one now finds emergent tree saplings and other succession plants that are reclaiming what once was an unprotected sandy river bottom mantle soil so common along the northern banks of western Oklahoma's flatland rivers. At the inland edge of the new land, only a slight terracelike step of soil near native plum thickets belies where the river ran 40 years ago.

Grimes, a range-management agronomist by training with a stint as a range conservationist for the era's Soil Conservation Service (SCS), now the Natural Resources Conservation Service (NRCS), was aware of many plant materials available for riparian erosion control near waterways, ponds and upstream flood-control lakes. That knowledge, and the need to buffer the Cimarron along his pastures, led him to get starts of Shoreline common reed from the SCS Plant Materials Center in 1980 and multiply them for use on his own fragile property.

By 1983, he was ready for a counterattack on the river, and as the weather warmed that spring, he was wading along the water's edge -- burlap sack full of common reed rhizomes in tow -- and the riverbank, digging holes and planting shoots. For several weeks and nearly half a mile, he worked planting around 3,000 shoots just above the Cimarron's normal summer waterline. Then, he waited.

"It took a year to see I had a successful planting and actually another year to really convince myself I was making progress," Grimes explains. "Since then, I've sold thousands of shoots to landowners around the country for erosion control, and I tell them, 'The first year, you're
going to think I lied to you,'"
he chuckles.

HOLDS AGAINST THE FLOOD

"The common reed rhizomes root quickly and propagate themselves from the rhizomes as well as by stolons that form along the surface of the soil from the shoots that sprout. Once established, it just doesn't wash away," he explains.

NRCS officials say Shoreline common reed was originally collected in 1970 along a Texas railroad right-of-way and seems to be adapted across much of the southern and southwestern U.S.

Grimes says unlike cattails and other similar plants, Shoreline common reed does not invade standing water, so it makes an excellent riparian planting where one desires it to stop at water's edge.

"You can expect an established stand to grow 3 to 5 feet tall by midspring and up to 12 feet tall by season's end," he explains. "The roots don't water-kill like bermudagrass, but they form a network right where the water is most likely to erode."

As a longtime supplier of the reed for erosion control under the name of Grasslander, Grimes recommends planting a rhizome -- containing at least two to three growing points -- at 1-foot intervals along the affected shoreline next to the waterline.

"Using my own rhizomes, many times I double up and plant two in the same hole just to ensure I get a good stand and don't have to replant," he explains.

Grimes digs rhizomes in late winter to early spring, depending on demand, and sells them for $1 each up to 10,000 per lot. He uses an ancient Servis terrace-building tool which upends the roots with a one-bottom moldboard plow and follows up with a vertical auger that lifts the roots from the turned furrow and deposits them along the row for ease of gathering.

"Beyond 10,000, we drop the price significantly, but there is a lot of labor required to dig the 4- to 7-inch rhizomes and hand-cut, sort and bag them, so it takes a big order to qualify for the discount (usually about 65 cents per rhizome)," he says.

FENCE OUT THE CATTLE

While he's watched "made land" redevelop along the southern edge of his sandy mantle-soil pasture over the years, Grimes has not been eager to expand his grazing into the thriving stand of Shoreline common reed.

"One of the drawbacks of Shoreline common reed is cattle really enjoy tromping through it and eating it, so we keep it fenced," he explains. "Because it's tall, it acts as a windbreak to cut down on wind erosion near the sand hills that dot the pasture. And, it provides a good, somewhat sheltered area for wintertime feeding cubes and minerals.

Such a place has a value of its own as Grimes works to return the light soils of the pasture to a developing native tallgrass species stand for the Longhorn-based composite cow herd he's developing.

"Ultimately, I want a herd that thrives on warm-season grasses in the summer and can survive on standing forage in the winter," he explains. "And, if the river keeps bringing me more land to protect that pasture, it all works together." 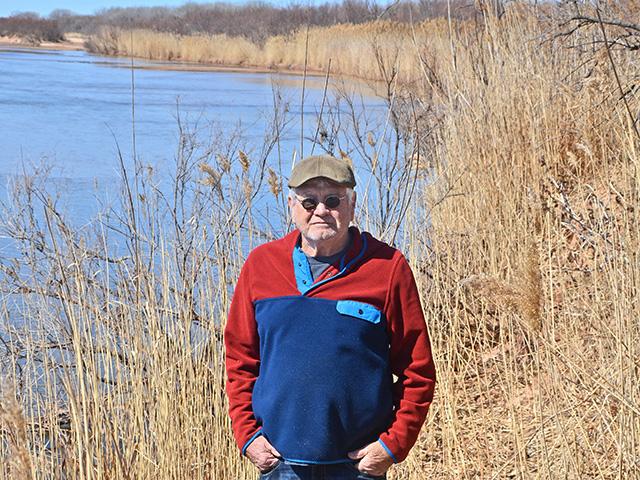