Over the past 15 years, Tom, Dan and Ben Griffin have increasingly partnered with conservationists to improve grazing on their two fifth-generation Texas ranches, parlaying brush-control programs into better shortgrass pastures, all the while fighting drought and natural succession of mesquite and cedars.

The Griffin Ranch covers a total of more than 45 sections on the Oldham County operation in the northern Panhandle and the Borden County ranch, near Snyder, south of Lubbock. The semiarid climate and fragility of native shortgrass pastures provide a daily challenge for the brothers as they seek to boost production of their Angus and Angus/Akaushi herds.

"In this part of the country, you either develop some kind of brush-management system, or you go out of business," explains Matt Coffman, rangeland management specialist for USDA's NRCS Southern High Plains Region. "Going back to 2004, the Griffins have used Environmental Quality Incentives Program (EQIP) funds and Natural Resources Conservation Service (NRCS) recommendations in a multipronged approach. They are grubbing mesquite and cedar trees, as well as using aerial applications of herbicides to clear the trees, pricklypear cactus and salt cedar.

"Since 2014, we've worked with them on fencing projects and the planning and construction of various water points in their pastures," he explains. "And, when Dan came back to the ranch, he became very active in prescribed burning to fight brush and improve forage."

Tom, who runs the Borden County operation with Dan, recalls when he returned to the ranch from college, he just assumed the EQIP program was a "grubbing program," and he was the principal "grubber" at the beginning.

Starting with a front-end loader, the Griffins fought with the mesquite on the Borden County ranch and cedars and yucca on the northern place, making significant headway clearing strips through the forest of succession plants. Today, they run a Caterpillar 320 excavator and have much better luck extracting the mesquite by its taproot.

"We've noticed mesquite trying to reestablish on some of those acres we grubbed in 2004-05, so it's a constant battle."

In all, Griffin says over the years, they've cleared nearly 1,600 acres with the excavator in a program that Coffman says currently pays $134 per acre cleared and raked.

"We mainly grub the trees," he explains. "We have a lot of cotton in this part of Texas, and we want to be sensitive to our neighbors when it comes to applying herbicides with airplanes. Still, there are remote areas where aerial application is feasible, and the program currently pays $20.56 per acre for that."

With the southern ranch crisscrossed with cleared strips, Griffin says there's been a marked difference in grass production where the trees have been removed. The ranches include bermudagrass pastures, as well as native buffalograss, blue grama and tobosa grass, which becomes unpalatable as it ages.

"In our area, pastures rarely look really good," Tom says. "But, where we've cleared and burned, the difference is like night and day, especially when it rains. The buffalograss is coming back, and the cattle are eating the regenerated tobosa again. Also, the strips provide good buffers for quail and deer, and they make it much easier to gather cattle," he adds.

Coffman says the renovated acres suffer in drought just like the untreated acres on adjacent property to the Griffin operation. However, he says removing the mesquite and other competition for the grass leaves the Griffin pastures looking better than surrounding land, regardless of the conditions.

The Griffins are also enrolled in the NRCS Conservation Stewardship Program, which helps with pasture renovation practices such as rotational grazing and prescribed burning to keep the grasses juvenile and vigorous.

"On our cleared acres, we've gone from stocking roughly 15 pairs per section to 20 to 25 pairs without running out of grass by the end of the season. Also, we're on a five-year plan to manage the grazing to allow the pastures to rest at least 25% of the time -- either in the spring or fall."

The brothers rotate areas where they feed and place mineral supplements away from water points.

"That way we're not trampling and overgrazing around the water, and the cattle have to go find the grass," Tom Griffin explains.

The brothers also have used NRCS technical help and cost-share for replacing more than a dozen aging windmills with solar-powered pumps to water their cattle on the Oldham County ranch. And, Coffman says they've laid nearly six miles of waterline and storage facilities to ensure a gravity flow to water points in seven pastures on the southern ranch.

Currently, the brothers are using EQIP, which is paying $1.21 per foot to replace five miles of internal fencing that is roughly 50 years old.

Griffin says his family's experience with the local NRCS office personnel has been very positive over the years and dates back to his father, Lane, and his original cooperation with the agency on early brush-control activities.

"They are always honest about what is and what isn't approved, and we've had very good luck cooperating with them," Griffin explains. "They understand us, and we seem to always be on the same page."

He says because drought is the primary challenge to ranching in West Texas, water and grass conservation have been the biggest goals of his family's cooperation with NRCS.

"It's certainly helped with the trees that compete with our grass, and it's given us a fighting chance in an area where it rarely rains at the right time." 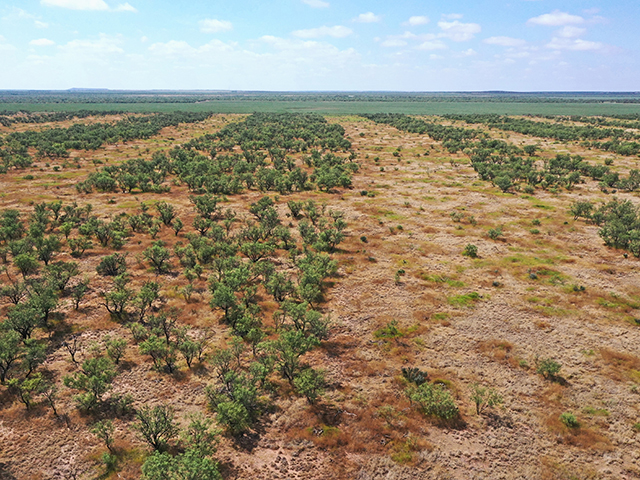