The problem is the sky to the west, though JC Schemper doesn't quite believe it yet. A dark horizon looms, distant but persistent, beyond the wide-open expanse of a western Kansas wheat field.

The morning weather report suggests that a line of storms could pop up, but that they'll dissipate by the time they hit the Kansas-Colorado border and before they impact Schemper and his custom-harvesting crew working near Scott City, Kansas.

Schemper slides his sunglasses to his forehead and squints through the dust his combine kicks up in the 200-acre field.

"Just a sun-blocker," he says.

The dark horizon was only one of the things looming over Schemper that day, his crew's first day working on a big, new contract.

That crew, mostly young men, is always one of those concerns. They're good employees, Schemper assures, but kids all the same. He always has one eye on everyone else in the field, offering advice and orders with a two-way radio that rarely leaves his right hand.

Then, there's the client and the job to consider, and what a job -- more than 5,000 acres of wheat in the summer with a promise of that much and more corn in the fall. There is nearly $500,000 on the line, and already on the first day, there's a problem.

Schemper had sold the job in the winter on the promise of four John Deere combines cutting from the first acre to the last, not out of brand loyalty but to generate consistent yield-mapping. When he arrived for that first acre, he rolled in with two Deeres and a Gleaner. Some initial infield tinkering couldn't get the different brands to produce compatible information.

"Oh, he noticed," Schemper says of his client. "He's already mentioned it twice. He said if we can't produce a consistent map, we need to park it."

There are long-term concerns bouncing around Schemper's mind, too. He's a third-generation custom-harvester, and he lives for those summers on the road. Still, he can feel it all vanishing, fewer crews every summer, perhaps a dying way of life.

And, there are dark clouds to the west.

"Just a sun-blocker," Schemper repeats, more hopeful than confident before returning his sunglasses to his eyes and his focus to the golden field in front of him. "It'll fizzle out."

Wheat acreage has decreased nationally five of the last six years. The 2019 crop, 45 million acres, was down nearly 30% from 20 years ago.

The 6.9-million wheat acres in Kansas last summer was the smallest planting since 1909 and about half of what was planted in the 1980s.

But, it's not as simple as custom-harvest providers disappearing alongside that demand, either.

Equipment is larger and more efficient, but also much more expensive. The cost of a new combine has nearly tripled in the last 25 years.

"It's getting bad," says Greg Thurman, another third-generation custom-harvester. "The equipment costs too much. The insurance costs too much, and you can't get any labor. It's killing us."

Thurman has seen the custom-cutting lifestyle disappear around him. His hometown of Kiowa, Kansas, was once a hot spot for custom crews and home to 29 teams in the 1990s. The local John Deere dealership sold 127 combines in one year, and there was a thriving Massey dealership, as well. Now, those dealerships have closed, and just three custom crews remain.

Thurman says there will likely just be two by the start of this summer's run. Seventy years after his grandfather took the family's first harvest run, he's done.

But, Schemper, based in Holdrege, Nebraska, isn't ready to quit.

His grandfather first took to the road when the 250 acres he farmed in northeastern Kansas didn't prove enough to feed six children. Now, Schemper Harvesting runs a total of eight combines. JC manages most of the business and leads a team with two machines. His dad, LaVern, uncle Lonny and brother Jared each have their own teams, as well.

JC lights up at the idea of his children taking over someday. His wife, Trisha, and their three boys spend the summer on the road as a part of the crew. For JC, that's still the best part of the whole thing: time with his family.

Lee Bowman, 18, wanted to work with the kind of big machinery you don't find in the small Virginia fields where he's from.

Alex Caillaux, who drives the tractor and grain wagon, is French and hopes to parlay a summer working the harvest in the United States into a life farming back home.

Nick Devine, 23, is on his second harvest run and worried that it may be one too many. He's always wanted to farm his own ground back home in Indiana but doesn't have the ground to farm or the money to buy it.

He drives the trucks and dreams of being somewhere else, perhaps not even Indiana. He's trying to learn French as he hauls wheat, listening to lessons on his smartphone.

Maybe when this is all finished, he wonders aloud, glancing for traffic down a deserted gravel road, he'll visit his new friend Alex and try to get a job on a farm in France.

Hiring help is a big part of the job for operators, and they sell the gig hard, appealing to romanticism, adventurism and even patriotism.

"Do you want to travel the country and gain valuable experience on the great American harvest run?" one radio ad blares. "Do your part to help feed the world by joining an American harvest crew today!"

Schemper offers $2,500 a month as a base salary. Then there's food, whipped up by Trisha. Lunch is eat-as-you-harvest, but dinner demands a full stop.

"I know some other guys, you might not get supper until 1 a.m. I like to sit down and enjoy talking to my guys for 15 minutes," Schemper says. "We stop, even if the rain is coming, even if the next farmer is saying, 'I need you right now.'"

A place to stay -- a rolling bunkhouse -- is included in the compensation package, as well.

Finally, there's a bonus system for anyone who finishes the season.

That's not many. Only two of Schemper's crew make it to the final field of corn in late November, just a week before Thanksgiving. An attrition rate of 70% is normal, Schemper says. But, at least $600 extra per month awaits those who persevere, so long as certain rules are met:

> Go to bed and be up and ready to work on time.

> Be able to perform tasks when asked.

Other operators lean heavily on foreign workers. It's all Thurman has hired in recent seasons, pulling in help from Iceland to Romania to New Zealand.

Schemper has been there but now hires only one foreign worker per season.

"I want him to connect with us and have a very good experience learning the American culture," he says. "If you have two, they sit over here and talk amongst themselves, and don't get to know the rest of us."

The dark cloud to the west of Scott City on July 1 threatens only more headaches for what's been a migraine of a season for Schemper Harvesting. A wet, cool spring and early summer set harvest back weeks, which then threw off the delicate south-to-north and, to a lesser degree, east-to-west ripening patterns that make the Texas-to-Canada summers work.

The company's eight combines are spread across Kansas by July, and Schemper's promise of four together, all providing compatible mapping, is impossible.

There was hope to get the mapping information from both brands to sync, but it wasn't happening on the go.

"It's just all we have right now," Schemper says of what he was able to start with, his two Deere machines and a Gleaner on loan. "A lot of my friends aren't even out here yet, so we're ahead of the game."

The last thing they need is more rain. But, as evening comes on, and the crew puts the finishing touches on its first 200 acres of the contracted 5,000, the line of storms has yet to break up as scheduled.

Several hours later, in the darkness and after moving down the road to a new field, Schemper and the crew scramble through a drenching rain struggling to shut down and protect their machinery as a deluge comes from above.

They try three different fields the next day, eager to find dry grain anywhere, but to no avail. After finally giving up on the last field, the crew, young and old, pile in the trucks and head for town, leaving behind a day on the great American harvest. 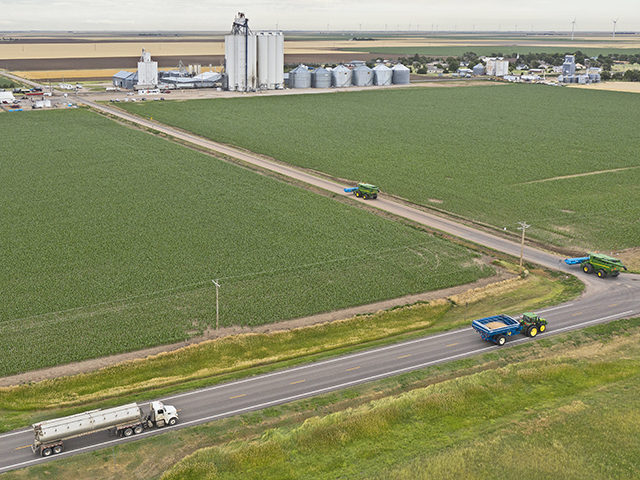