Ron Heck isn't known to wear an ascot, but maybe he should after helping solve one of the Midwest's great agricultural mysteries.

The Perry, Iowa, farmer has a lot in common with Freddy of "Scooby-Doo, Where Are You?" fame.
Both have the drive to decipher whodunits -- but in different ways.

The teenage sleuth would devise a kooky trap to catch the fake ghost to solve a crime. Heck simply used an inquisitive nature, a little persuasion and, most importantly, yield maps in 1994 to eventually "unmask" once-mysterious villains, soybean cyst nematodes (SCNs). It was and continues to be the No. 1 soybean yield robber responsible for an estimated $1 billion in losses annually, experts say.

But, it used to be much worse. Industry officials and farmers agree Heck played a pivotal role in increasing awareness of SCN and its devastating effects in the Midwest. That led to more intensive management of the pest, Heck's prominent role fighting SCN, significant yield increases that put billions of dollars in growers' pockets and a shift in agricultural research.

"Ron is a visionary and insightful enough to recognize how this new tool in the early 1990s (yield mapping) could so powerfully be used," says Kirk Leeds, Iowa Soybean Association (ISA) CEO. "He made a difference ... and set the stage for what was to come."

Farragut, Iowa, farmer Steve Lorimor adds, "Ron's the guy with an answer to a question that nobody else could answer."

Heck suspected great yield variability in his soybean fields prior to the mid-1990s, but he didn't know for sure. It wasn't until he installed a yield monitor in his combine 26 years ago and embraced precision agriculture, including yield mapping, that it was confirmed.

In those days, yields fluctuated from 20 to 60 bushels per acre (bpa) within many fields, even those with few visual symptoms. Why? Initial guesses were iron deficiency chlorosis or problems with pH, fertilizer or drainage.

"I didn't know anything about SCN. It was a Southern problem, so we thought," Heck says.

He showed the maps to Iowa State University (ISU) researchers and fellow Iowa Soybean Promotion Board (ISPB) and ISA directors.

Heck surmised if his fields succumbed to mysterious yield variations, it wasn't an isolated case. He suggested to colleagues to use soybean checkoff money to fund an on-farm research project to find out why.

"It was not a hard sell," recalls Lorimor, then chairman of the ISPB Research Committee. "If Ron hadn't (suggested the project), we might not have ever got started."

The study, which started in 1996, consisted of two 50-acre sections of the middle of two fields in a corn/soybean rotation on Heck's farm. Each section was divided into half-acre grids. Two other sites were added in years two and three.

"Soil tests were taken along with an SCN count not expecting to find anything," Heck remembers. "We were all surprised that not only did I have nematodes but a lot of them. Some counts exceeded 30,000 (eggs per 100 cc [cubic centimeter] of soil)."

"I thought a 45-bpa average was good, but I could have had 55 or better with the right soybean varieties and had I known what to do," Heck says.

The study's data proving SCN is the primary soybean-yield-stealing culprit has changed the industry, officials contend.

The North Central Soybean Research Program started the SCN Coalition in 1997. The group's iconic campaign, "Take the Test, Beat the Pest," pushed awareness and soil testing for SCN. University researchers worked together more than ever to offer management recommendations.

SCN-resistant soybean varieties weren't available in large quantities or bred with northern soil and climates in mind. Soybean associations, with tens of thousands of members each, convinced seed companies and public breeders to change that.

Yield losses attributed to the parasite were reduced 5 to 10 bpa or more, depending on the severity, Heck says. But, they weren't eliminated.

SCN is no longer a mysterious yield robber thanks to Heck's actions. Though still a problem, it's not as costly as it once was.

"You get a big smile out of me for that," Heck says. "We changed the industry for the better. We made soybeans a better crop."

Managing SCN is a lengthy process. It took Ron Heck years to reduce and keep SCN populations low. Yields jumped 10 bpa or more as a result. 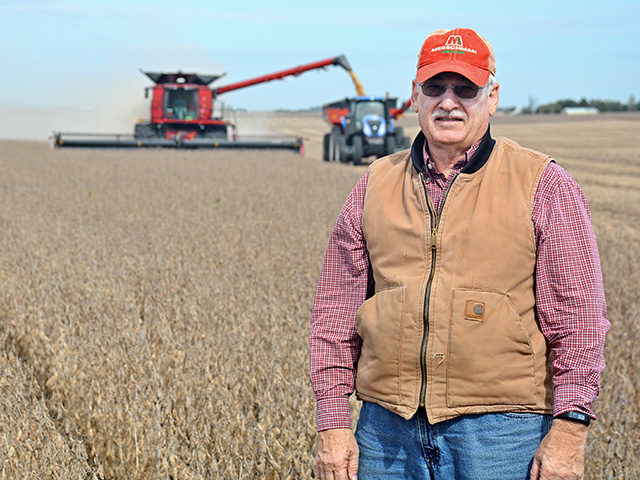