After digging into yield potential in 10 states, the DTN/Progressive Farmer 2019 Digital Yield Tour, powered by Gro Intelligence, wrapped up by forecasting a national average corn yield of 163.2 bushels per acre (bpa) and a soybean yield of 44.2 bpa, both below USDA's August estimates of 169.5 bpa and 48.5 bpa respectively.

During the week of August 12 through 16, DTN paired Gro's real-time yield maps, which are generated with satellite imagery, rainfall data, temperature maps and other public data, with on-the-ground commentary from farmers to conduct the DTN/Progressive Farmer 2019 Digital Yield Tour.

The national yield estimate includes all production in the U.S., not just the 10 states included in the tour.

During the past two years, Gro's August corn and soybean yield predictions have been within 1.5 bushels or so of USDA's final number, released in January.

The Gro yield model updates on a daily basis to include the latest satellite and weather data. Gro reports the corn-yield model started out in the mid-170s then dropped into the 150s before bouncing back above 160 bpa in recent weeks. For comparison, in 2012, U.S. corn-yield estimates started off the season in the mid-160s, then the USDA final yield ended at a 123-bpa national average.

"In a year when there are no easy comparisons to previous planting periods and crop conditions, the DTN/Progressive Farmer 2019 Digital Yield Tour, powered by Gro Intelligence, provided a serious and much-needed crop survey for the market to assess in August," DTN lead analyst Todd Hultman says.

The national corn-yield estimate of 163.2 bpa suggests USDA may find fewer crops in September when it ventures into actual fields. "If nothing else, the states needing clarification have clearly been identified as Missouri, South Dakota and Illinois-through-Ohio," he adds.

"If true, this year's soybean crop will be down roughly 1.1 bb from 2018 and offers significant relief to burdensome ending soybean stocks at a time when trade with China is not going well," he adds.

Many have made the mistake of assuming that what did get planted in Illinois will make its usual high yields, noted Tyler Young, who farms in the east-central counties of McLean and Ford. Gro's yield models and his own scouting tell a different story.

The state is on track to yield an average of only 153 bpa, a 27% tumble from last year's average yield of 210 bpa and well below USDA's August estimate of 181 bpa.

Gro's forecast for a 30% decline from last year's yields in that county sounds spot on, Young says.

"We put our corn in under subpar conditions just like everyone else, and it's been backpedaling ever since," he says. "I think soybeans could be a worse story than corn."

Gro pinpointed the state's potential yield average at 46 bpa, down 29% from last year and 9 bushels lower than USDA's August estimate.

In Indiana, Gro Intelligence's corn-yield estimate is 28 bushels below USDA, at 138 bpa, and the contrast to last year is striking. In 2018, a vast majority of counties in Indiana had yield potential above 180 bpa.

Gro's soybean yield forecast of 46 bpa is 4 bpa lower than USDA's August estimate and 21% lower than last year's final yield of 58.5 bpa. Last year, the lowest county average was 49 bpa, while the majority of the state saw yields in the upper 50s and lower 60s. This year, the bulk of the state is forecast to have yields from the mid-30s to mid-40s.

With a statewide average of 187 bpa, Gro's models show Iowa with the highest corn-yield potential of the 10 states included in DTN's Digital Yield Tour. While the yield potential is strong, it sits well below USDA's 196-bpa estimate last year and August estimate of 191 bpa.

On soybeans, Gro forecasts a statewide average yield of 53 bpa, down 5 bpa from last year and also slightly below USDA's August estimate of 55 bpa.

Considering the wet spring that plagued Nebraska this year, corn and soybean yields are holding their own, but growers say average yields conceal a wide variation of crop conditions.

With a statewide average of 182 bpa, Nebraska has one of the highest average yields of the 10 states included in DTN's Digital Yield Tour. While that's only 10 bpa shy of last year's bin-busting 192 bpa, it's also below USDA's August forecast of 186 bpa.

Where Randy Uhrmacher farms in south-central Nebraska, this spring's storms were spotty, and it seemed like he always had a dry field somewhere to plant. So, while he wrapped up corn planting in late April and soybean planting in mid-May, there were farmers that planted up until around June 10.

Gro pegs the average Nebraska soybean yield at 56 bpa, 3 bushels below NASS's final estimate last year and 2 bpa below USDA's August estimate. Yields range from a low of 39 bpa in Hooker County to a high of 69 bpa in Phelps County.

"There are probably more train wrecks out there than normal," he explains. "The good stuff is there, but it didn't take much to mess it up."

South Dakota led the country in prevented-planting acreage this year with a total of 3.86 million acres, 2.8 million of which were corn and 850,000 of which were soybeans, according to USDA Farm Services Agency. But, what did get planted is expected to have decent yields.

Yields range from a low of 86 bpa in Lincoln County to 215 bpa in Meade County. The highest yields are clustered in the southwest corner of the state, where moisture has been unusually ample--but not as extreme as central and eastern Kansas, where corn yields lag on the Gro map.

Crops vary widely depending on planting date and summer rainfall, says Kyle Krier, who farms in Barton County, in central Kansas. There, Gro projects corn yields to average 163 bpa, but the three counties north of it are expected to yield in the 90s and Rice County to the east only 123 bpa.

After record-setting rain this spring, the tap turned off at crucial periods like pollination and grain fill in central Kansas, which particularly hurt late-planted fields, Krier says.

"I think a lot of people will be reasonably disappointed in test weight, ear girth and kernel size," he continues.

As for soybeans, Gro pegs the state's average yield at 36 bpa, well below the 43.5-bpa average last year and USDA's 42-bpa August estimate.

Missouri dealt with a double dose of flooding this spring, the result of a record wet May and all of the runoff causing historic flooding along the Missouri and Mississippi rivers. Gro's corn yield forecast is sharply lower than USDA's August estimate of 160 bpa.

County-level yield maps highlight the wide variation in potential ranging from a low of 65 bpa in Howell County to a high of 191 bpa in New Madrid County. The highest yields are concentrated in the southeastern region of the state known as the Bootheel, as well as the crop-heavy region of north-central Missouri, stretching along the I-70 corridor from Kansas City to St. Louis.

Gro pegs Missouri soybeans at an average of 39 bpa this year, 6 bpa below USDA's forecast in August and the state's final yield last year.

There's also greater variation in county yield potential as Minnesota farmers struggled with a wet spring. For instance, counties in the southern third of the state last year had corn-yield estimates ranging from 190 to 200 bpa. This year, yields in that southern third are more variable and lower, ranging mostly from 150 to 190 bpa. Across the rest of the state, yields appear to have been trimmed by 10 bpa or more from last year.

Where Mark Nowak farms, in the southernmost county of Faribault, Gro maps suggest yields will land around 197 bpa on average. Potential was actually far higher than that, Nowak says, before a terrible windstorm ripped through the region and caused widespread green snap. "I think millions of bushels of corn were lost in this region," he says.

Statewide, Gro forecasts an average soybean yield of 44 bpa compared to USDA's 46-bpa estimate in August. That's 6.5 bpa lower than in 2018. Last year, most soybean yields in the southern half of the state fell between 40 to 60 bpa. This year, Gro's county-level maps show bean yields ranging from 35 to 45 bpa, with only a handful of counties breaking past 50 bpa.

Much of Ohio saw record-setting rainfall this spring, and as a result, almost 1.5 million acres--880,000 of it corn and almost 600,000 of it soybeans--went unplanted. At 136 bpa, Ohio's corn yield average is the lowest of the 10 states included in the DTN Digital Crop Tour. It's 24 bpa lower than USDA's August estimate and 27% less than last year's final yield.

On soybeans, Gro's statewide yield forecast of 42 bpa is 6 bpa lower than USDA's August estimate and 27% below last year's final yield tally. Yields in the state's northwest region range from the upper 20s to mid-40s, a sharp departure from last year's mid-50s to low 60s. 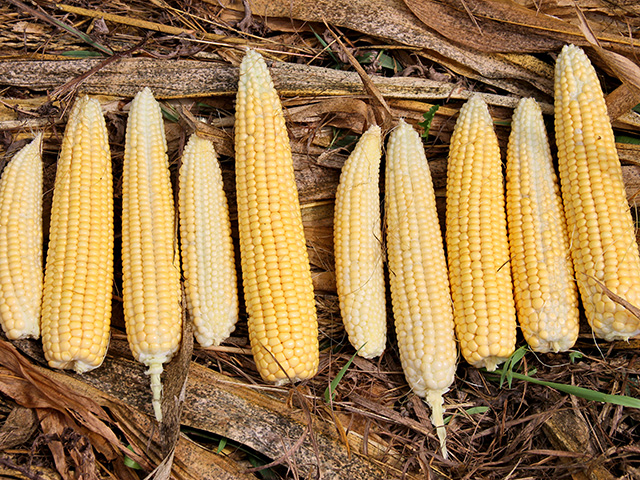