OMAHA (DTN) -- Confirming that food inflation remains an issue for American families going into the holidays, Thanksgiving dinner will cost about 20% more than last year, according to the American Farm Bureau Federation.

A big chunk of that price inflation, however, depends heavily on when and where you buy your turkey. And inflation won't slow down Americans from traveling this holiday season.

AFBF on Wednesday released its 37th annual survey of prices for a traditional Thanksgiving feast for 10 people. The costs came out at about $64.05, or about $10.74 higher than a year ago, a 20% increase in costs.

"It's worth pointing out that even with these increases, this market basket still works out to about $6.50 per person for what is essentially a Thanksgiving feast," said Roger Cryan, chief economist at AFBF.

The farmer share of an average meal is about 16 cents on the dollar, according to USDA's Economic Research Service. That translates to farmers receiving on average $10.25 of that Thanksgiving dinner.

Despite inflation for food and fuel, AAA this week predicted 54.6 million people this year will travel more than 50 miles from home this Thanksgiving. Travel could reach pre-pandemic levels. AAA predicts this will be the third-busiest Thanksgiving travel season since 2000. About 49 million people will drive to their holiday destinations.

A turkey, the centerpiece of most American Thanksgiving meals, is projected to cost on average about $1.81 a pound, up 21% from last year, though prices right now are lower than that. A 16-pound turkey will run on average $28.96. AFBF noted the higher price for turkeys is due to several factors beyond inflation.

Farm Bureau noted its group of "volunteer shoppers" checked prices from Oct. 18-31 "before most grocery store chains began featuring whole frozen turkeys at sharply lower prices. USDA Agricultural Marketing Service data shows a frozen turkey bought on the week of Nov. 3-9 averaged $1.11 a pound, and as low as 95 cents a pound for the week of Nov. 10-16.

"There's a tendency for turkeys, for example, to get cheaper as we get closer," Cryan said. "Since we've done the survey, the number of stores that are featuring turkeys in their circulars at discounted prices has risen. Those discounts will probably grow, even though it's been a tighter market."

That price difference, $1.81 to 95 cents, is $13.76, reflecting the bulk of the higher prices AFBF attributes to the inflation costs for that holiday dinner.

A DTN shopper at a Hy-Vee grocery store in Omaha saw Butterball turkeys at $2.29 a pound on Tuesday, while the store also was offering free frozen turkeys to shoppers who also bought a ham.

A USDA report in September showed the number of turkeys raised in 2022 was 212 million birds, down 2% from last year. The largest turkey-producing states, Minnesota (37.5 million) and North Carolina (28 million), were both down 7% in birds. Some of the decline in turkey numbers could be attributed to avian influenza, but turkey production has been on a steady decline since peaking in 2017 at 245 million birds raised.

Farm Bureau's other pricing showed the biggest jump in prices was a 14-ounce bag of cubed stuffing mix at $3.88 a bag, up 69% from a year ago.

Two frozen pies were up 26%, as was a half pint of whipping cream. Frozen peas, dinner rolls and miscellaneous ingredients were up 20%. Pumpkin pie mix was up 18%, a gallon of milk was up 16% and a 3-pound bag of sweet potatoes was up 11%. The price of a 12-ounce bag of cranberries was down 14%.

Factoring in all the side dishes and fixings, they cost 22% higher overall compared to last year.

The cost of that Thanksgiving meal is more affordable in the South, averaging $58.42, while consumers in the Northeast will pay $64.02. In the Midwest, the average price is $64.26. Consumers in the West pay a higher cost at $71.37 for the dinner.

Cryan noted on a call with reporters Wednesday that farmers have seen their fuel costs double, and fertilizer costs have tripled this past year. "The war in Ukraine is affecting quite a few commodity prices over and above our general inflation rate," Cryan said. "It's important to understand farmers are feeling this pain as well."

Two turkeys from North Carolina will travel to the White House this weekend where President Joe Biden will pardon them on Monday. The National Turkey Presentation at the White House dates back to 1947 with President Harry Truman, according to the National Turkey Federation. The two turkeys were raised by Ronnie Parker, president of the NTF, at his farm near Monroe, North Carolina. The turkeys, once pardoned, will get to retire at NC State University in Raleigh. 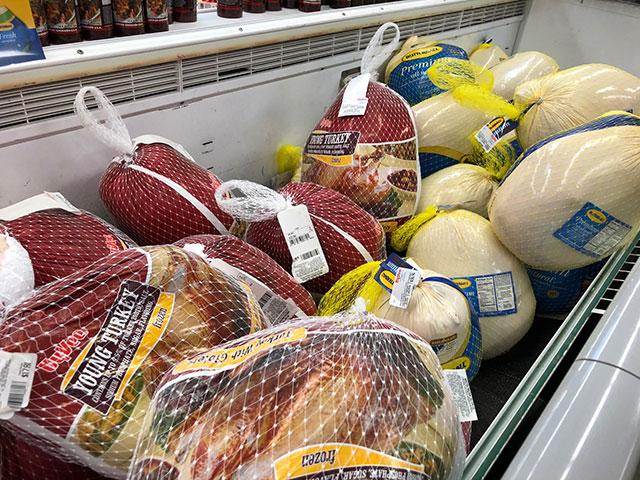