For the third winter season in a row, Pacific Ocean equator-region temperatures and barometric pressure values are expected to be in La Nina category. The U.S. National Oceanic and Atmospheric Administration (NOAA) defines La Nina as: "The periodic cooling of ocean surface temperatures in the central and east-central equatorial Pacific. Typically, La Nina events occur every three to five years or so, but on occasion can occur over successive years. La Nina represents the cool phase of the El Nino-Southern Oscillation (ENSO) cycle."

Early August measurements of the equatorial Pacific temperature and atmosphere showed the equator region sea surface temperatures generally from 0.5 degrees Celsius (0.9 degrees Fahrenheit) to more than 1.0 degrees C (1.8 degrees F) below normal from the South America Coast to the International Date Line. Those values are in La Nina category; values of 0.5 degrees C or below denote La Nina. On the barometric pressure angle, the Southern Oscillation Index (SOI), a measure of the barometer comparison between the island of Tahiti and Darwin, Australia, had a 30-day average of positive 10.76 on Tuesday, Aug. 16. (The SOI has a La Nina benchmark value of positive 7.0.)

The associated wind patterns with these features set up large-scale high pressure off the west coast of North America along with the development of a jet stream track which runs from the Gulf of Alaska southeast to the Ohio Valley, then curving back to the northeast toward the northeastern U.S. and the St. Lawrence River Valley in southeastern Quebec, Canada. We are all too familiar with how precipitation has evolved with this track. In general, the northwestern U.S., Midwest and southwestern Canada have had moderate to heavy precipitation this year, with dryness dominating elsewhere, especially the Southern Plains. (An active summer monsoon season has become a heavy rainmaker in the Southwest, and tropical disturbances from the Gulf of Mexico started firing up rains in Texas during mid-August.)

Looking ahead, La Nina is established enough that this coming fall and winter seasons are expected to be La Nina seasons as well; odds are greater than 70% for La Nina to remain at least through early winter. That means a La Nina winter for the third straight winter for only the third time in the 73-year record of ENSO (El Nino/Southern Oscillation) statistic tracking. The implication is the La Nina-influenced jet stream track will remain in place for at least the next four months and possibly longer. The suggestion is heavier rain and snow are on the way for northern and northwestern regions of the U.S. along with much of Canada, while the southwestern U.S., Southern Plains and Southeast stay on the dry side. Such a trend is not promising for areas in drought to turn things around on soil moisture before next spring. There is also the potential for another delayed start to spring fieldwork in northern areas due to wetter soils and cooler temperatures going into the spring.

The Pacific equator temperatures are expected to ease from the cool La Nina levels and move toward neutral during the January-March time frame in 2023. However, NOAA Climate.gov blogger Emily Becker notes, "It would be pretty rare for the event to terminate so early in the year. If La Nina does decay to neutral in January-March 2023, it would be only the fourth time in the 24 La Nina winters we have on record." In other words, expecting La Nina to fade by next spring is a long shot.

Conclusion: La Nina and its effects are likely to again feature during the 2022-23 winter season. La Nina could also stay around as we go into spring 2023. The wetter north-drier south pattern with La Nina could very well continue for another winter-spring cycle. 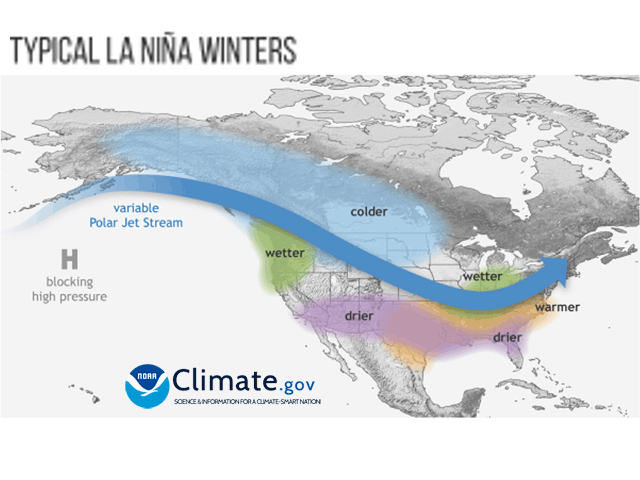 About the Author
Connect with Bryce:
@BAndersonDTN