Livestock specialists across the country are warning that many species, including cattle, horses and sheep, can become sick and even die due to ingestion of blister beetles in hay.

This is not a new threat, but one that appears to be heightened in many areas this year where the pests are swarming alfalfa hay fields in large numbers.

There are several types of blister beetles, but it's the striped blister beetle that's of most concern to livestock producers, said Miller. They are attracted to alfalfa and weeds and are hard to detect.

These beetles produce a poison called "cantharidin", which is released when they are crushed. As a result, even when dead the beetles have high levels of toxin and are dangerous if ingested.

Miller, explained that cantharidin is a stable toxin, so even dried remains of these beetles (broken or whole) in hay are poisonous. She reported that there are typically a smaller number of these beetles in first cuttings of alfalfa, but more appear in hay harvested later in the season.

These beetles can be very hard to see, with Miller saying she uses a sweep net to monitor them. "I've walked through swarms while taking insect sweeps and never noticed them until I found them in the sweep net," she added.

Just 30 to 50 striped blister beetles consumed by a horse can be lethal, with as few as two to five potentially causing colic in some horses. Horses, which are thought to be the most susceptible to the beetle's toxin, absorb and excrete it through their kidneys, damaging the stomach lining, small intestine, kidney, ureter, urinary tract and urethra.

Symptoms of beetle poisoning may include mouth ulcerations, frequent urination, contractions of the diaphragm, colic, diarrhea, discarded intestinal tract lining in stool, reduced calcium and magnesium level in blood, pawing and frequent play with lips and tongue in water.

For cattle and sheep, which also experience symptoms, there is not a known number that is lethal.

Miller has been studying blister beetles since the mid-1980s, and she said there remains a good deal of misinformation on the internet about how to treat them. One is that treating a field with insecticide prior to harvest only leads to higher numbers of the dead insects in hay. Miller told DTN that based on her observations she does not believe this is the case because the dead beetles fall onto the ground and aren't picked up in the hay.

"I scouted alfalfa for six years, and I wanted to know what happened if we sprayed and got a good kill," she said, explaining that the striped blister beetle feeds on leaves, not flowers.

"We sprayed some fields, and they were dead on the ground," she recalled. "I got a bale in from where we had some huge swarms and I took it apart pretty much straw by straw on a tarp. I found one wing cover. So based on the processes we were using at that time, I did not see higher numbers of them in hay where we had treated with an insecticide prior to harvest."

Asked if the higher numbers of blister beetles this year are tied to drought, Miller says she can't say this is the case for sure. She does know that high levels of blister beetles tend to follow a year when grasshopper populations are high, which makes sense because blister beetle larvae feed on grasshopper eggs late summer and then overwinter. They emerge beginning in June. Adults then feed, mate and lay eggs for the next generation.

Miller shares these tips for producers harvesting and/or buying alfalfa hay this year:

1. Use your first cutting to feed horses.

2. Avoid using hay conditioners or crimpers. Use a self-propelled harvester with wide-set wheels to windrow alfalfa as it's cut. Hay conditioners and crimpers tend to kill beetles when cutting and don't allow them to move out of alfalfa as it dries.

3. Apply an insecticide for control.

4. Scout fields eight to nine days before harvest, focusing on the edges of fields.

5. Scout one day before harvest to see if the beetles have reinfested after the insecticide treatment.

6. Check hay for blister beetles at the time of feeding. Removing the beetles won't prevent poisoning in susceptible animals because in addition to the dead beetles still holding the toxin, the hay also absorbs the cantharidin.

7. Be aware that grinding hay does not remove the poison.

8. Mowing alfalfa prior to flowering won't affect striped blister beetle numbers because this species is as likely to feed on nonflowering alfalfa as flowering.

9. Using a sickle bar mower results in driving over the newly cut swath, which means more beetles may be crushed and killed in the swath by tractor tires. 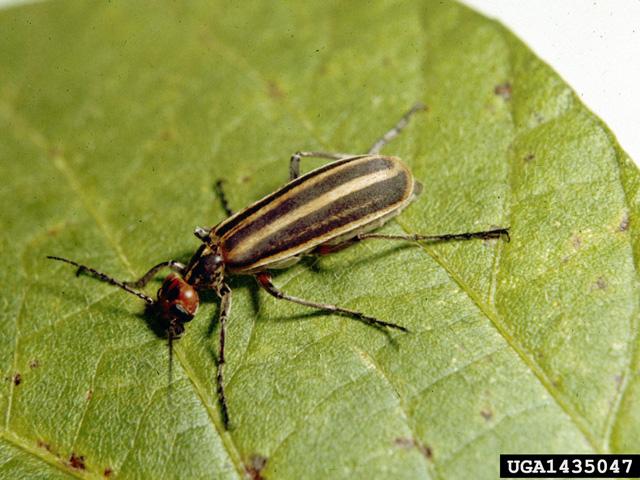