Editor's Note: This column has been updated since a version of it originally ran April 13.

It's one heck of a predicament to be in to need a snowstorm that was so challenging and unforgiving that calves were lost to piercing winds and blinding, cold, deep, wet snow -- all for the hope that the ground will soak up the storm moisture and tame the country's drought.

The problem with cultivating strong men and women is that it comes at an expensive cost on several levels.

And, last week, cattlemen prayed for the strength to get through the storm -- which reached blizzard status in some areas -- and they prayed even more for the trouble to be worth their time and energy.

Thankfully, we serve an amazing God that knows the prayers we wish to mutter even when our tongue can't profess the words to form sentences. And as cattlemen get out to battle the aftermath of last week's storm, many of them are praying those delicate prayers.

I spoke with Kristen Schurr, who some of you may know. She's the owner of Kristen Schurr Photography and has become a champion in capturing images that portray the Western lifestyle. From brandings, ranch rodeos, to family sessions, she does it all.

But last week she hung up her professional camera to defend the ranch in the middle of Montana. She and her husband, Josh, live outside of Ekalaka, Montana, on the Triangle Ranch.

"Saying it was a rough week around here doesn't accurately depict the whole story. Most of our neighbors, like us, couldn't get to our cows for an entire day because of the wind and snow," Schurr shared.

"In some spots, the drifts are as high as our corrals, and in other spots, the ground is bare. I really wish the snow would have stuck around on our hay fields, but it didn't. The road going out to our cows is drifted with 3- to 5-foot drifts, so the only way we can get out there is by horseback or boonie bashing out there with the tractor," she said.

"In the heat of the storm, we had six calves, but throughout the entire week, we had close to 30 -- which matters because those newborn calves were small and vulnerable to the storm."

The challenges and work didn't end when the storm did.

"Most of the work came the days after the storm. Josh (Kristen's husband) and I rode all day to get cows brought in and to get the calves put in the warming room. One day, we were able to get eight pairs brought in, but after the chaos of the storm, only one cow took her calf, which meant we had to begin grafting calves, which takes time and energy -- lots of it."

When asked what the hardest part of the situation was, Schurr said, "The hardest part of the storm for everyone around was the wind and not being able to get out to the cows. I know others in the community couldn't even get across the road to check their cattle. It's such a helpless, heartbreaking feeling not being able to get out to your animals in a storm. By the third day, I could only get to one of our horses (out of 17 head) to catch and use to bring in cows.

"If we didn't have our horses, I'm not sure how many calves we would have lost," said Schurr. "I know one of our neighbors slept in his tractor with his cows, and I wish we could have done the same. In the days ahead, we will continue to work on the graft calves, and doctor anything that's sick; that's all that we can do at this point."

The list of reasons why we should shake our head at this line of work and question our sanity rises beyond belief, but cattlemen were up at the break of dawn to fight the storm. They know we desperately need this moisture.

In these trying times, it's easy to become overwhelmed and struggle mentally. But I'm here to encourage you, and to remind you that your work isn't going unnoticed and that in time, the market will indeed pay producers the earnings you deserve.

First, DTN Ag Meteorologist John Baranick summed up the recent storm by saying, "The blizzard that dumped 12 to 24 inches of snow from southeast Montana through North Dakota, southeast Saskatchewan and southern Manitoba, with some reports up to 30 inches in North Dakota was not the only snow storm for the region. An additional storm over Easter Sunday brought another 4 to 8 inches of snow near the Canada border in northeast Montana and most of North Dakota. Some reports of up to 12 additional inches were noted in north-central North Dakota."

He continued, "All that snow can be melted down to about 1.5 to 2.5 inches of equivalent rainfall. For some of the areas in North Dakota that received up to 40 inches, the totals were nearing or eclipsing 4 inches."

He explained these amounts are based on estimates from both satellite and radar because direct observations were almost impossible. "For most areas, drifts covered meteorological equipment and knocked out power. The three-day event really was incredible."

Looking at what is ahead, Baranick noted, "Once it's all melted and soils warm up, which might take a while, it will be a huge boon to growth and drought reduction. That is especially true if the region gets more precipitation. A storm system this weekend is being forecast that could bring an additional foot of snow to eastern Montana, northeast Wyoming, and the western Dakotas.

"Models may change, and there are questions to precipitation type, amounts, and track of the storm, but it could be another big event, just more on the scale of 24 hours instead of 48 to 72 hours," he said.

Second, while on-feed numbers are high now, they won't be forever. Once last year's calf-fed fats get worked through, the market is sitting in a ripe position for calf prices to be stellar. With how aggressive the nation's cowherd liquation has been, those who have calves to sell are undeniably going to reap higher prices this fall. October feeder cattle contracts, as of April 18, sat at $177.57, and the November feeder cattle sat at $179.15.

Regardless of how you decide to look at the market's outlook, or the fickle nature of weather, remember that the U.S. cowherd is going through a liquidation cycle, and prices are bound to get stronger.

I tip my hat to each and every one of you out there battling the market's cards. Whether it's drought, cash flow insufficiencies, the squeeze from higher fuel prices -- or spring storms such as last week -- know that you are the men and women who will create good times once again through your commitment to this industry, and precious way of life. 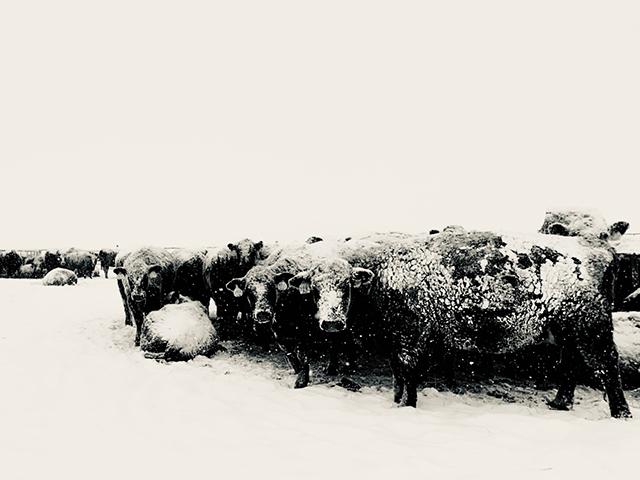