ATLANTA (DTN) -- Delegates for the American Farm Bureau Federation (AFBF) got caught trying to navigate how to support reform for cattle markets but not support a government mandate that would force cattle producers to sell their livestock through cash markets instead of formula contracts.

Tuesday, Jan. 11, at AFBF's annual meeting is typically a daylong series of debates as the 346 delegates wade through 200-plus pages of their policy book to add and rework policies regarding an array of topics.

Farm Bureau delegates spent a large part of midmorning Tuesday debating language to support increasing the share of negotiated cash trade in cattle markets. Arguments stemmed from legislation proposed by Sen. Deb Fischer, R-Neb., and a bipartisan mix of 13 other senators, at least nine of whom are members of the Senate Agriculture Committee.

Fischer's bill is S.3229 -- Cattle Price Discovery and Transparency Act of 2021, introduced in mid-November after negotiations between Fischer, Sen. Chuck Grassley, R-Iowa, and others crafted the compromise bill. The bill would require USDA to set regional mandatory minimum cash trade for fed cattle purchased by packers for slaughter.

Nebraska Farm Bureau members noted Fischer essentially designed her bill last year after looking at how it fit with Farm Bureau policies. Changing Farm Bureau policy would essentially flip 180-degrees from policy Fischer used to craft her bill. AFBF delegates on Tuesday initially looked to remove language stating that "Any government effort to increase the amount of negotiated sales should be respectful of regional differences. Any marketing requirements should be reviewed or sunset to allow for a thorough cost-benefit analysis." Sixty-five percent of the delegates voted to support keeping that language.

However, after another long debate, AFBF delegates kept conflicting policy in their book to oppose "government mandates that force any livestock slaughter facility to purchase a set percentage of their live animal supply via cash bids."

Producers had a lot of different views on how to handle cattle markets that varied greatly depending on their state. Some said government mandated cash markets will not increase cattle prices, while others said a mandate is needed to ensure packers at least bid for cattle in their states or from smaller producers.

"If you increase the number of cattle in the cash market, prices go down, said David Vontunglen, a cattle feeder and delegate from Oklahoma. Producers who spent years improving genetics are now rewarded with premiums on formulas, he added. "This isn't the way to determine price discovery," Vontunglen said.

Mike McCormick, president of the Mississippi Farm Bureau, said cash bids recently have been more frequent and prices have gone up as a result. Some of that may be spurred by the legislation.

"A lot of us believe there are more cash bids going on because there is this bill that is going to move to more cash bids," McCormick said. He added, "All we're asking for is to get a cash bid."

"We're going to be telling our members how they sell their cattle," said Russell Boening, president of the Texas Farm Bureau.

Glen Brunkow, a Kansas cow-calf producer, said mandating a 50% negotiated cash price would lead to the government telling producers how to market their cattle. He added that the cattle market challenges stem from some of the recent black-swan events in the industry.

"I feel this a knee-jerk reaction to a couple of extraordinary events that happened over the past couple of years," Brunkow said.

Delegates struggled with the idea of supporting a government mandate while others pointed out AFBF supports ethanol mandates among other policies. "I think it is a little hypocritical for us to say we don't support mandates," McCormick said.

The provisions put down a marker for Farm Bureau's stance on commodity programs going into 2023 when Congress is expected to rewrite and reauthorize the next farm bill.

Delegates also support raising the loan rates for each commodity. In another provision related to the safety net, AFBF wants to index commodity payment limits to inflation as well.

Farm Bureau delegates largely think the reference prices and loan rates currently are too low and below the breakeven costs for those crops.

In another change, AFBF wants producers with generic base acres not receiving ARC or PLC payments from 2019 to 2023 to allow those base acres to be redistributed to create a new base on farms with a history of planting program crops.

Those provisions were new to AFBF's policy book. Iowa and Nebraska delegates introduced proposals to strip language for higher price supports out of the policy book, but those amendments weren't debated on their floor because they were certain to lose. 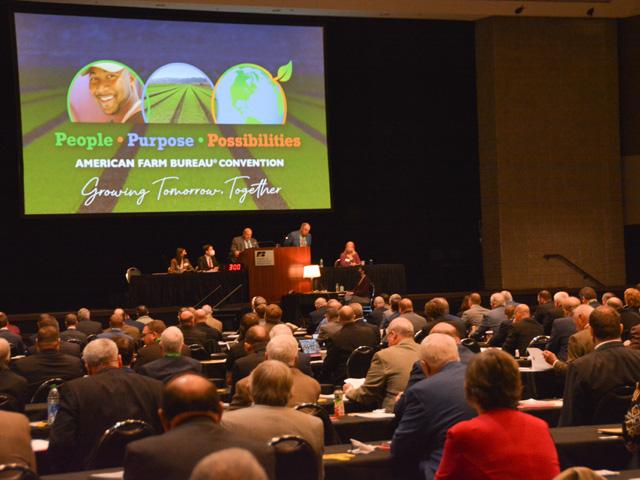