There's no question cover crops can do a lot of great things for the soil, but as livestock producers try to put a dollar figure to the practice it's often a cover's value as feed that first comes to mind.

Mark Yoder grazes a 150-head commercial Angus cow herd in southwest Iowa, and says they like to graze corn stalks and soybean stubble planted to covers to keep hay costs down. Most cover crop grazing here takes place October to November. Typically, that's when cattle are grazing standing cereal rye, along with corn stalks. That cereal rye will overwinter, says Yoder, helping with weed control in the spring. For his operation, it's that weed control benefit that is primary. But the additional grazing is a nice bonus.

"The cows belong to my dad," he says, adding they are usually weaned off by October. "Mostly they are at the feedlot by the end of the year, but in 2021 we had good grass and they were just getting weaned off mid-November."

Yoder has worked on several projects with Practical Farmers of Iowa (PFI), a proponent of the use of covers. He's seen especially good grazing for cattle come out of covers planted after small grains, explaining there is a longer window for that cover crop to grow before frost. Another option for a good cover crop, he notes, is establishing it after chopping corn silage.

"If corn can be chopped in early September there is good time to establish a cover crop with lots of fall growth," Yoder says. "Oats, rye, wheat, turnips, radishes, clovers. . .the list can go on. In our area oats especially can get good growth in time for that late fall grazing period.

Producers who work strictly on a corn-soybean rotation will have challenges establishing a cover crop that can be used to feed cows over the winter. But Yoder says he's found that seeding triticale or hybrid rye after corn or soybean harvest will provide good fall growth and grazing.

"The next spring it will grow fast, and we like to chop it for silage. It's good quality feed and great tonnage," he says, adding those acres can then be planted to corn or soybeans and still get a good crop.

Most years Yoder says they will be feeding hay by January, when snow and ice are bad. This is the only time they will need to feed enough hay to supply all the cow needs. While there will always be something green growing in the fields, what is out there over those winter months won't provide a lot of nutrition.

"I'd consider it more residue grazing in the winter," he adds. "Cereal rye won't have much height in the fall and winter months, because that's when it's putting its energy into putting out tillers and roots for the spring."

The use of cover crops in Iowa has been growing. PFI reports fewer than 10,000 acres were planted in 2009; today it's well over 600,000 acres. The group encourages pairing covers with livestock, and even has programs to help match livestock producers with row crop farmers for contract grazing through the Midwest Grazing Exchange. They stress that nutritional quality of cover crops can vary widely, depending on whether it's grazed as a standing forage, or fed as hay or haylage.

Meghan Filbert, PFI Livestock Program Manager, says their research shows the amount of feed produced from cover crops can vary due to seeding time, rate and weather. A reasonable expectation, she adds is 1 to 2 tons of forage per acre off of a cover.

The quality of that forage will be lower for grasses in terms of protein; and higher for legumes and brassicas. Less mature forages are generally more digestible, with more crude protein. Once forages reach their reproductive stage, however, both digestibility and protein levels drop. If a cover crop is harvested, it should be timed prior to this reproductive phase.

Forage testing, notes Filbert, is the best way to know the nutritional content of a forage, and a step that shouldn't be skipped as producers make feeding management plans for the year.

What PFI calls "cocktail mixtures" of cover crops increase the likelihood that something will grow, regardless of the season's weather and moisture. In addition, these mixtures may provide a more balanced profile than a monoculture cover.

Specifically, PFI reports that oats and brassicas seeded into cash crops provide late fall to early winter forage. Rye, triticale or wheat and winter peas or hairy vetch will yield some tonnage in the fall, but plenty of forage come spring. And oats, rye and a brassica give some fall and some spring grazing if well managed. The only species that gives reliable spring grazing, however, is rye, stresses PFI's Filbert.

Cover crops aren't just for parts of country that can count on regular rainfall. They can be especially advantageous in areas where water retention is critical, like the Southwest.

Paul DeLaune, an environmental soil scientist with Texas A&M AgriLife says covers not only protect the soil surface, but help reduce compaction and increase organic matter. All of that helps reduce erosion, increase water infiltration and improve the soil's water holding capacity. Despite these positives, DeLaune says adoption of the practice in his state remains low.

Where covers are being used, the Vernon, Texas, researcher says the trend has been toward more use of cover mixtures, usually comprised of a good proportion of small grains.

"Under grazing scenarios we will manage this similar to someone who grazes wheat through the winter," he explains. "We can use the same indicators, or rules of thumb, we've used in the past if we were grazing winter wheat, with grazing a cover crop mixture."

Drought, he says, can really negatively impact biomass accumulation and add to worries about nitrate accumulation in forage. He says producers who consider grazing covers in the region, need to check with local Natural Resources Conservation Service EQIP (Environmental Quality Incentives Program) guidelines if they receive cost-share dollars. There have been some recent policy changes regarding grazing covers, he explains.

"The NRCS has changed policies, particularly in semi-arid environments, due to the biomass produced. If you're in a drought, you probably aren't grazing under programs like EQIP. If you're outside of these environments, you just have to make sure you aren't taking off too much through grazing, and that you're leaving a good protective ground cover. Just be sure you have adequate biomass to graze and that what is there can withstand the pressure."

That said, he notes that producers as a general rule can be pretty aggressive when it comes to grazing small grains because come spring they will catch back up.

"Remember, if this is defined as a true cover crop the goal is to leave that in the field. You don't want to remove that biomass or residue completely," explains DeLaune. "One approach we have studied is letting it grow and then flash grazing it in the spring, right before you plant that next crop. The idea is that as the cover grows through the winter you get more root growth, above-ground biomass, and accumulated carbohydrates into the plant. That gives us good root structure and based on the soil surface we may sequester more carbon below ground before the cattle graze it."

Flash grazing, he adds, has been the most common approach used in short-season scenarios, such as warm-season cover crops between annual wheat crops.

As work continues to look at how to get the most out of cover crops in arid regions, a group of Kansas State University researchers released a report last year that considered the value of cover crops for forage production and for soil health in dryland crop production.

J.D. Holman, one of the authors of the report, said in the semi-arid central Great Plains, cover crop integration into dryland production models has been slow. The thinking is that the cover crop can use water that would otherwise be available to the subsequent cash crop. In these cases grazing or haying the cover may provide an economic benefit to offset that loss, depending on the operation.

"We consistently see the best way to make cover crops economically feasible is through forages," he says. "And we have seen positive effects on soils whether [the cover] is left standing, grazed or hayed."

The work looked at cover crops that were a mix of oat and triticale, and grazed, hayed or left standing. The four-year program followed a wheat-sorghum-fallow cropping system.

Forage mass varied widely with precipitation and temperature from a high of 3,145 pounds in 2015; to 1,655 pounds in 2019. Growing covers ahead of wheat reduced winter wheat yield in two out of four years. The covers had no effect on grain sorghum yields. 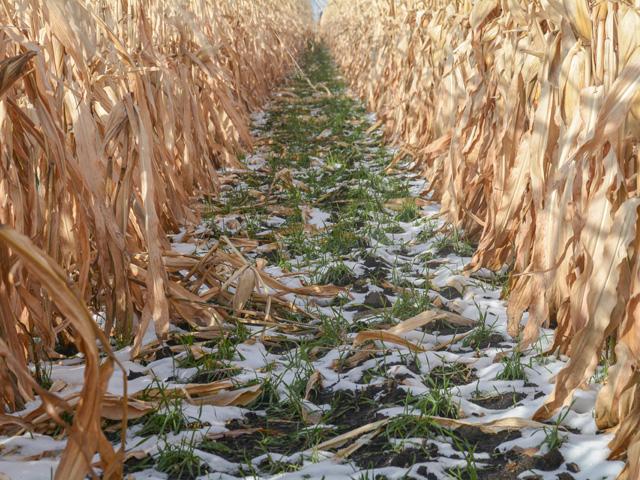