ST. LOUIS (DTN) -- Brian Kinsey manned a small booth in early August at the Cattle Industry Convention in Nashville, looking to get the message out to cattle producers who might have an opportunity to export livestock.

Kinsey is assistant director for marketing and business development at the St. Louis Lambert International Airport, which opened its Livestock Export Center late last year. Kinsey began to promote the export facility to the larger livestock groups with booths in Nashville and at the World Pork Expo last June.

"There are so few people who know this even exists," Kinsey said. "We have to make them aware this is available."

Kinsey and other Lambert officials are hoping the airport's foray into live animal exports will expand beyond a handful of shipments of swine the facility has seen since it opened in late 2020. So far, every shipment out of the facility has been breeding hogs bound for Brazil. Ideally, dairy or beef cattle will soon start racking up flying miles as well. "We know it's going to happen, but it's just a matter of time," Kinsey said.

Lambert had a 36,000 square-foot building sitting idle that had been used for package delivery at one time. So, with encouragement from Missouri officials, the airport began looking five years ago at the possibility of diversifying its cargo business by adding a livestock facility.

"The belief was with the people who came up with the concept that it was only natural for St. Louis to be in the livestock exporting industry because of our location," Kinsey said. "So much of our livestock industry is in the central part of the United States and Canada, which is where we're getting our livestock from."

The facility was set up with 56 pens and inspection stalls as well as a roller system that helps move crates of livestock. The building also has water lines running across it to provide water to animals as they come off the trucks and wait in pens. Lambert officials also highlight that the Livestock Export Center is just a day's drive from the majority of cattle ranches and hog farms in the country, though the airport has already exported hogs trucked in from as far away as Saskatchewan, Canada.

Rhonda Hamm-Niebruegge, director of Lambert International Airport, said the airport has been making a push over the past decade to increase cargo shipments in and out of St. Louis. As the airport focused on cargo, the issue of live animal charters began to take hold.

"As countries around the world were looking to be able to grow their own livestock in order to feed their people, that was a growing market," Hamm-Niebruegge said.

Airport officials took about two years talking to people about what was needed and then getting some state grants to set up the pen system, Hamm-Niebruegge said. Then it took another two-and-half years to get export approval from USDA. The airport got temporary approval about 18 months ago, and it goes through temporary approval for each charter right now until they have cleared enough shipments for USDA to grant permanent status.

Throughout this process, Lambert officials worked with the Missouri Department of Agriculture to understand what the needs were for a livestock facility. "That's not what our expertise is as an airport," Hamm-Niebrugge said. "What we wanted to prove was that we were a good market for these charter activities."

The World Trade Center in St. Louis helped Lambert with grants for some of the equipment in the facility, as well. "Cargo has been a focus for us, but we're really trying to look at more international activity from both a passenger and a cargo perspective, so the trade piece fell right into that," Hamm-Niebrugge said.

Talking about challenges with delays at ports for cargo ships via ocean, Hamm-Niebrugge noted live animals are not conducive for long delays at ports. "The air, in the long haul, has become more economical because its reliable," she said. "You know that when you ship it, it's going to get there alive and in a matter of hours instead of weeks.

Another feature of the export center is a small office to go through reams of paperwork with USDA. Kinsey said when animals are arriving at the export center, USDA provides an inspector who will remain on site and ensure all the paperwork is in order until the livestock are loaded onto the cargo plane.

Typically, hogs are trucked in and transferred to crates. They do not need to be quarantined at the airport because the animals are required to be quarantined at their origination farm before being loaded onto the trucks. If USDA determines an issue with an animal at the airport, they are then moved into isolation pens then USDA inspectors can determine what needs to be done with the animals. The loads of hogs that have been shipped are put into in crates towed by dollies and are loaded onto Atlas Airlines 747-400 cargo planes set up exclusively for those shipments. On the shipments so far, the hogs have arrived by truck, rested for about six hours, then it takes two to three hours to load them into crates. The plane arrives and there's a three-hour window to load it before it takes off. Essentially, if all goes smooth, the livestock are at the airport about 12 hours from arrival to departure.

"It can happen really quick if everything goes as scheduled," Kinsey said. A benefit in the Lambert set-up is the hogs or other livestock don't have to be trucked in crates before arriving at the airport. There's no need for intermediary transferring from one truck to another off-site. The animals are put into the shipping crates on-site, then weighed, and sent off to the plane for loading.

Another advantage of the facility is it basically operates through a day-to-day lease. An exporter can lease the entire building for a few days and ship the animals through the building, then turn the building back over to the airport.

So, if you have to ship 100 cattle to Argentina, one of the first decisions would be to contact officials at Lambert. "We have a real simple permit that allows you to be in this building to occupy it for that period of time, get your business done, and then turn the building back over to us," Kinsey said.

Livestock exports are largely dominated by trucking shipments to Canada and Mexico; but every so often a large volume of animals is shipped elsewhere. According to USDA's Economic Research Service, China has imported more than 13,000 hogs since January 2020, exclusively listed as breeding animals. Brazil has imported 16,116 head, listed as a mix of breeding hogs and pigs under 50 kilograms. U.S. live hog imports come almost exclusively from Canada, though more than 200 hogs this year have come from France.

For cattle -- excluding Canada and Mexico -- Vietnam has imported more than 8,600 cattle from the U.S. since January 2020, according to USDA. Egypt, Pakistan, Thailand and Uzbekistan have each imported thousands of cattle over that time as well, ERS data shows. At one time, Russia was also a top destination for U.S. live cattle, but Russians have bought sparingly in recent years with no buys since 2019. U.S. cattle imports are almost exclusively from Canada and Mexico.

While at the cattle meeting, Kinsey noted at least one person visiting his booth asked whether the export center could be used to import sheep from New Zealand. Kinsey said he didn't see how importing through the facility would be any more complicated than exports.

A video of Brian Kinsey showing the airports livestock pens and process for shipping animals: https://www.dtnpf.com/… 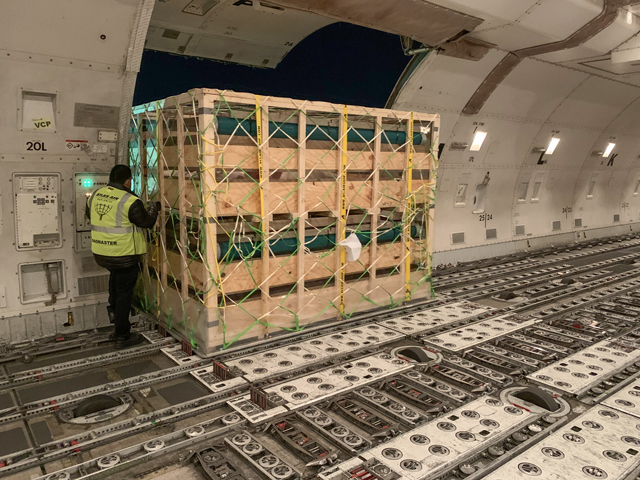