OMAHA (DTN) -- Despite a growing season with massive weather extremes, from not enough moisture in the Northern Plains and too much rain in the Eastern Corn Belt, hay prices don't appear to be on the rise. While prices closer to drought areas have increased some, reports from other areas show steady to even lower prices compared to last year.

Weather will ultimately decide how much hay supply there is this growing season. Other factors, such as livestock producers cutting back on their cattle, could have a huge effect on forage demand.

Hay prices saw a jump in June as the first cutting of alfalfa was coming onto the market, according to Paul McGill, owner/manager of Rock Valley Hay Auction located in Rock Valley, Iowa. Since then, prices have been fairly steady, he said.

Hay in Nebraska sold steady for the week ending July 23 (https://www.ams.usda.gov/…). Alfalfa in central Nebraska averaged $115/ton while good grass hay was at $105/ton. The Nebraska Direct Hay Report said hay demand was off a bit this week as spotty rain showers across the state have taken away some of the urgency to procure hay.

McGill said second cutting alfalfa in his northwest Iowa location has some quality concerns. The region saw some rains while the local producers were attempting to get the hay put up.

The drought in the Dakotas and in the western states will have an effect on the hay market in his region, he said. He normally pulls hay out of northeastern Nebraska to his sale. But this year nearly all the hay west of the Missouri River is going north or west.

"I do have some concern about our hay supplies later on in the year, but some buyers need to take action to obtain feed now," McGill told DTN.

Across Iowa, the situation is considerably different. Dale Leslein, manager of the Dyersville Sales Company, reports hay prices are slightly lower than last year in his area of northeastern Iowa.

Several factors -- from increased hay production to both beef and dairy producers deciding to limit their numbers -- have created a situation of almost too much hay on the market.

Lower milk prices and feedlot owners losing money feeding cattle have pushed some livestock producers in the region to liquidate herd numbers. Leslein said he knows of several dairy farms in nearby Wisconsin who have decided to get out of the business.

"And these are larger 600 cow dairies as well," Leslein said.

The area was dry this spring, which allowed hay producers to produce a large amount of first cut alfalfa, with nearly all of that put up with no rain, he said.

This crop may have been the highest quality hay he has seen in his 25 years of selling hay, he added.

Leslein said his biggest concern is decreasing hay demand because of fewer livestock buyers as both beef and dairy producers see profitability decrease.

Those who choose to continue raising livestock face higher feed prices. Some buyers just can't afford to buy hay at these higher prices, he said. The next 30 days or so will be key to see how many producers will decide to liquidate their operations or stick it out, he said.

"I hope our local livestock producers decide to stick with it, but sometimes the economics just don't work out," he said.

TOO MUCH RAIN in ECB

While much attention has been given to the severe drought in the Northern Plains, hay producers in the Eastern Corn Belt have had the exact opposite issue -- too much moisture.

Maria Cox, who farms near White Hall, Illinois, said she estimates her area saw about 10 inches of rain in late June. So far, they received several more inches in July.

The supply of hay in west-central Illinois should be ample this year with all the moisture, she said. Price is on par where it was a year ago.

Cox said some of the hay she sells might move towards the dry areas if trucking costs don't get too high to make it unfeasible. A few years ago, Missouri was fairly dry and some of their hay went in that direction, she said.

"Same might happen this year but the dry areas are farther away," Cox said. "We truck locally, but we are open to people from drought areas coming to pick up hay here."

Farther east, Jim Brown has had a challenging growing season as well. The Lebanon, Indiana, forage grower said he has had to battle too much rain nearly the entire growing season.

While he did manage to put up some hay in June that did not get rained on, most of his hay has seen some moisture. As a result, quality has decreased on much of his hay.

And what forage didn't get rain on it, harvest has been delayed. He recently first cut his orchard grass, which is later than normal, causing the hay to be overmature -- he couldn't get to it until now.

"This week is the first week in a while that you can cut without moisture," Brown told DTN. "I wish we could have shared precipitation in my area with folks elsewhere." 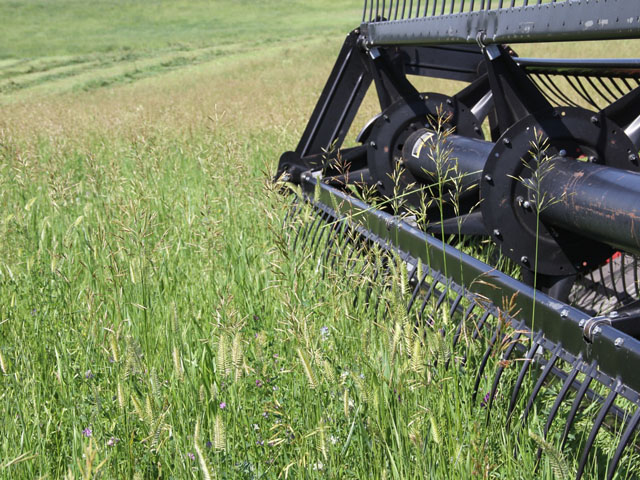