When the Virginia Tech Extension service kicked off their Graze300 program in 2015, they didn't have to think about getting Roy Boldridge on board. He was ahead of them by about 15 years.

"Graze300 is about managing and rotating pastures. It just makes sense to me," says the Rixeyville cattleman. The end goal of the Virginia program is to lengthen the grazing season and reduce expenses by cutting hay use. Boldridge is all over that, too, noting that every day of grazing is a day he saves on the cost of hay.

Some years, Boldridge says, his 120- to 130-head commercial cow herd, along with replacement heifers and weaned calves, can go almost the whole year on his pastures. He stresses he still feeds hay, but typically uses the commodity more as a supplement than the main course.

The producer has no trouble putting a dollar value on grazing versus hay, because he's in the hay business, too. The 5-by-6-foot rolls of hay he feeds cattle are the equivalent of around 32 square bales. For those, he gets $6.50 a bale on first-cutting fescue and/or orchard grass hay; $8 a bale for second-cutting.

The centerpiece of Boldridge's grazing system is the winter stockpile. In August, he pulls pastures out of the grazing rotation and lets them grow for standing hay. If possible, he'll stockpile as much as 80% of his 250 acres of permanent pasture and 65 acres of hay fields.

In the meantime, cows graze volunteer crabgrass, which is preferable to fescue during the hot weather. While he does have a couple of smaller fields of novel-endophyte fescue, most pastures are Kentucky 31 fescue, which contains a toxic endophyte that causes constriction of blood vessels in cattle, making them more susceptible to heat stress. It also has been shown to lower gains, milking ability and fertility.

Boldridge usually makes sure to leave at least a 3- to 4-inch residue of forage before he moves cattle off a pasture, but he says if they're on crabgrass, he'll take it lower if needed.

"Crabgrass and most summer grasses will dramatically lose quality and palatability after a killing frost, so there's no need of letting them re-grow," he explains. He's found a 28-day rest period at some point during the growing season for summer annuals allows them to make seed and volunteer the next year. If needed, he supplements the crabgrass with hay to make sure he gets that winter stockpile built up without losing body condition.

"Cattle will stay in better flesh, breed back better, and calves will weigh and grade better on stockpile than they do on hay," he says.

THE UPSIDE TO FESCUE

There's an art to rationing out that stockpiled forage. Boldridge lets cattle strip graze, using a strand of electric wire to concentrate them where he wants them. He'll portion off around a third to a fourth of an acre for up to 80 cows, moving the wire every day. He relies on his four-wheeler to make that daily move, and he maximizes his time by also tagging and castrating new calves while he's out.

"We can usually make it until mid-February on the stockpile," he says, adding he has two fields of rye and ryegrass, partially paid for with cost-share funds from the Culpepper Soil and Water Conservation district. April is typically when pastures green up here, leaving about an eight-week period from the end of the stockpile until grazing can resume. This accounts for most of Boldridge's hay use yearly.

"It is as good as any hay you can buy," he states. It has cut his annual hay use to around 75 to 100 rolls a year for his 80-cow herd. On his 90-acre leased farm, Bower says, stockpiling is really showing its worth.

He runs 40 virgin heifers and 15 first-calf heifers and their calves with no hay. He does supplement both sets of heifers with 2 pounds of distillers dried grain per head, per day when needed.

"Stockpiling has allowed me to keep more of my heifers and let them cull themselves after breeding. Then I can select those that perform on forage, rather than trying to pick out the best ones at weaning."

After pastures green up, both producers go to a quick rotation to make use of rapidly growing grass. Boldridge will put most of his herd on a 10- or 15-acre field and move them in a day or two, after they've clipped off enough grass to keep seed heads from developing. He says trying to keep quality up on rapidly growing grass, while saving enough for later, is a delicate balancing act.

"It can be difficult because you have no idea what the weather is going to be in two weeks," he says.

Moving into May, he slows the rotation to two to three days in a small pasture, then extends it to as much as five days to a week in the summer. He's careful not to take his perennial forages below around 4 inches.

"If you don't overgraze, the forages are more productive and will spring back quicker," he says, noting the roots typically mirror the forage above ground, and a deep root system helps plants cope with drought. He also doesn't discount the photosynthesis that takes place above ground with healthy plants.

Bower, who, like Boldridge, has been practicing rotational grazing for close to 20 years, adds he really appreciates the ground cover when it rains.

"When we started, I could see the rain running off the fields. Now we don't have any runoff," he says.

Even with the benefits of stockpiling and rotational grazing, Mize, who is Bower's county agent, cautions against going to extremes to cut hay use.

"The biggest thing about Graze300 is finding the sweet spot between hay use and an economical stocking rate," he says. "That's why it is called Graze300, not Graze365. There are probably years where we could graze 365 days, but with a lower stocking rate. However, most people with stockpile can economically get to 300 days of grazing."

Greg Halich, University of Kentucky forage systems economist, agrees with Mize on the importance of finding that economic sweet spot. He stresses, "Hay is a tool that allows you to have a higher stocking rate compared to feeding no hay at all."

Halich says the most profitable number of hay feeding days inevitably will vary from farm to farm.

"In the fescue belt and the current market environment, in most situations, the most profitable number of hay feeding days will range from 30 to 90 days. The specifics will change by the farm, depending on their hay costs and overall cost structure."

Roy Boldridge feels he's on the right track. "There isn't much profit in cattle, but I can sell hay. I can run a wire very economically. I use geared reels, they're $45, and a roll of poly wire is $30 for 1,650 feet. Posts are $3.50 and they last for years. You do need extra waterers, but sometimes I use a hose and a Rubbermaid tub. I just do what makes sense to me." 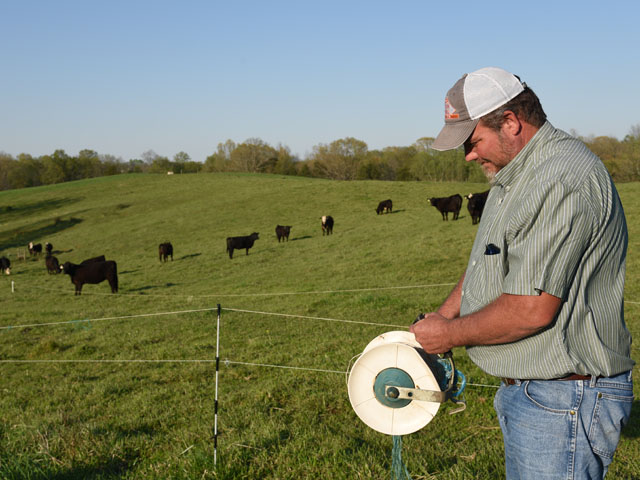