STEAMBOAT SPRINGS, Colo. (DTN) -- Nothing this side of an all-you-can-suck blood bank makes a tick happier than humidity, and ticks this summer are finding plenty of it, their ideal environment in which to flourish.

Researchers are seeing a big tick season launching, and that fits in well with a trend that's stood out in recent years. Ticks are coming earlier, staying later and posing threats to humans and livestock nearly around the calendar.

"Our tick seasons are probably more intense, and if our conditions stay humid, the tick population will be ripe to explode," said Justin Talley, a livestock entomology professor at Oklahoma State University and the principal investigator for the OSU National Tick Rearing Lab.

Tick activity has historically been a spring-and-summer issue, but Talley said his team has found activity as early as January and heavy activity by late February. Then, the season has been extending beyond Thanksgiving.

"Tick-borne disease to humans, livestock and domestic pets in the central Midwestern U.S. are increasing in their frequency and intensity," reports a study by Ram Raghavan, a University of Missouri epidemiologist.

Tick-related illnesses in humans have more than doubled in Center for Disease Control statistics between 2004 (22,527) and 2019 (50,865) and researchers are noticing.

Different ticks are entering new regions, as well. The Lone Star tick, for instance, has more often pushed north from its most common crawling ground in the south, and it brings along the potential for the Bourbon virus. The virus can cause fever, tiredness, rash, headache, body aches, nausea and vomiting, according to the CDC. Many patients diagnosed with the disease have required hospitalization.

A bite from a Lone Star tick can also cause some people to develop Alpha-gal syndrome, which makes them allergic to red meat, including beef and pork.

Talley also pointed to the Asian longhorn tick, which is slowly making its way from east to west across the continent.

"It can severely impact cattle," he said. "We don't have it here in Oklahoma yet, but it's multiplying. It's not only the year-over-year population that's a concern. We're starting to get new ticks coming in that are causing an impact."

It matters because of the pathogens those ticks can carry and the toll they can take on both two- and four-legged creatures.

Talley said as few as 10 female lone star ticks on a cow can affect production and make the animal less efficient feeding a calf. And when those ticks swell up fat from a feeding and drop off, they are laying the groundwork for the next generation.

The environment and the humidity are what help the arachnids survive and thrive. The more wildlife such as white-tailed deer are around, the better they do. And if the humidity hovers high, they can take off.

Ways to combat the bugs range from the small to the huge.

Studies have shown regular prescribed burns of a field can dramatically reduce tick activity. Regular checks on cattle can help, too, and sometimes it takes more than eyeballing from a distance. The American dog tick, for instance, tends to nestle in on a cow around the brisket, between the front legs.

"You won't see that tick unless you have it in the chute," Talley said. "You'll feel one before you see one."

There are plenty of chemical options for treatment for those and other ticks, often best coming on the advice of a veterinarian.

For humans -- except for young children -- Talley recommended bug spray, particularly varieties with heavy DEET concentrations, like OFF! Deep Woods, which have up to 40% DEET. Apply it to clothing, and don't forget to reapply, especially when sweating as the spray will dilute and the protection will disappear.

"We're at the time of year that you'll see a lot of ticks, and probably see quite a few ticks on animals if you're out there working," Talley said. "The tick season seems to get getting more intense, and for a little longer." 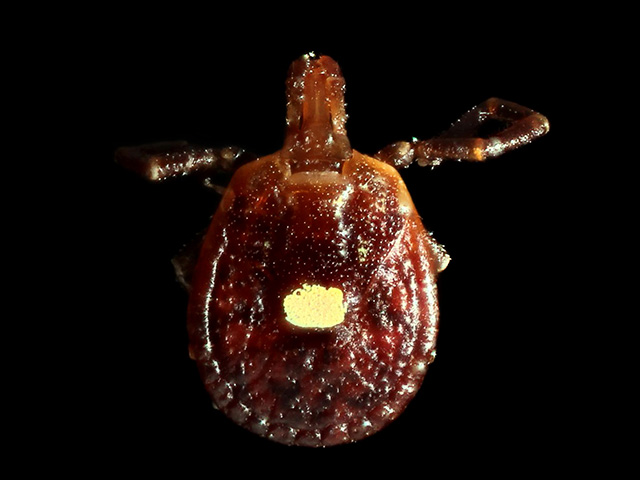