OMAHA (DTN) -- Aunbrea Zeleny and her family have been extremely busy in recent years. The family owns and operates the Oakland Meat Processing Plant located in Oakland, Nebraska.

Their business was already on the upswing before COVID-19 hit last year, and the worldwide pandemic has only increased the demand for local meats. So much so that they will break ground on a new facility along Nebraska Highway 32 on the west edge of the northeastern Nebraska town of about 1,200 people and leave the brick streets of downtown Oakland.

"We are just trying to keep everyone fed," Zeleny told DTN.

Small meat lockers are seeing much demand for their products with some facilities with no available appointments well into 2022. Midwestern states have even passed legislation to help these businesses adapt to the changing way people buy their meats.

The mindset of consumers in how they purchase meat has changed in recent years, according to Brianna Buseman, University of Nebraska-Lincoln (UNL) youth meat animal Extension educator.

People are much more interested in meat production and how these animals are raised and fed, she said. They want to know the local farmer and have a more local experience.

"We saw increased demand for local meat before the COVID-19 pandemic, and now this trend is even more evident," Buseman said.

Buseman said the increased demand for buying meat from small-town meat lockers has provided some opportunities for both these businesses and livestock producers. The resurgence of the local butchers is also good news for the small towns' main streets.

A silver lining of a worldwide pandemic is it may lead to a more robust regional food system, said Meghan Filbert, Practical Farmers of Iowa livestock program manager. Filbert works with about a thousand small and medium-sized livestock producers who want to set meat directly to consumers.

The pandemic showed there were issues with not nearly enough small meat processors for the number of animals farmers wanted processed. Existing plants need increased capacity, and new, more efficient plants with modern septic and wastewater facilities need to be built, she said.

"We have farmers who want to market more livestock this way but can't find the processing facilities," Filbert said. "We have some producers driving two hours one way with livestock."

Some meat plants are expanding, such as the case with the Oakland Meat Processing Plant.

Zeleny said her family has been considering expansion for some time now and finally decided 2021 was the year to begin construction. For every month they delayed, construction costs would rise 5% to 9%, with building components continuing to rise in price, she said.

The plan is to break ground in July, have a shell of the building completed by October and then complete the inside work during the winter months.

"We will have all local folks doing all the work as well," she said.

Zeleny's father-in-law, Mike Boell, bought the meat locker almost 28 years ago after working in the industry for a number of years. The small meat locker attracts consumers from the nearby large cities of Omaha and Lincoln, but also as far away as Kansas and Iowa, Zeleny said.

DTN Livestock Analyst ShayLe Stewart said the local meat trend also provides an opportunity for livestock producers amid a distressed cattle market -- they began building their "brand." When producers take the time to foster the relationship between producers and consumers, the producers are ultimately securing an additional revenue stream for their operation, she said.

"In these tough economic times, being diversified can be an utter saving grace," Stewart said.

Some Midwestern states have passed legislation recently to aid these businesses to handle the influx of new business.

Iowa House File (HF) 857 passed this spring and makes $750,000 in grant money available to small meat lockers with 50 employees or fewer (https://www.legis.iowa.gov/…). This money can be used to purchase new equipment or even build new facilities, according to Chad Ingels, a Randalia, Iowa, farmer and Iowa House Representative for District 64.

The bill should provide those lockers who apply about $20,000 to $50,000 per business to increase their capacity so they can process more animals more efficiently, he said.

"I had a meat locker owner tell me they usually have to have two employees slice bacon in the morning," Ingles told DTN. "Now they would only need one employee do this job with an upgrade of equipment."

Small, rural meat plants often face a shortage of skilled workers to process meat. Ingels said his bill will also set up a task force to determine what is the best way to train these people, which could include possible courses to learn this trade from Iowa's community colleges or even shorter, adult learning courses.

Ingels, who raises hogs and sells them directly to consumers, said the pandemic pushed the small lockers to their breaking points as the demand increased. He heard from locker owners and livestock producers, which is why he drafted this legislation, he said.

Hopefully, the state will continue to support this industry with more funds in the future, he said.

The South Dakota Department of Agriculture is allocating $5 million from Coronavirus Relief Funds toward grants for meat processers with fewer than 60 employees (https://sdda.sd.gov/…). Much like Iowa, the funds may be used for improvements, such as processing and slaughter equipment, coolers/freezers, livestock holding facilities and contractor costs.

In Nebraska, the Unicameral passed Legislative Bill (LB) 324 with a 48-0 vote this spring (https://nebraskalegislature.gov/…). The bill was introduced by Sen. Tom Brandt of Plymouth.

In addition to creating the Independent Processor Assistance Program to help processors with expansion, the bill also makes it easier for consumers to buy meat directly from livestock producers or processors. Consumers can purchase meat through an animal share, an ownership program in which an animal or herd is purchased by a written contract between the consumer and a livestock producer.

The first Nebraska meat locker to implement the new legislation is the Oakland Meat Processing Plant. Zeleny said they will apply for grant money through the state once the process begins and called the potential aid "super helpful" in helping to pay for their new facilities.

The herd share program will begin later this summer with the first animals to be a part of this new program expected to be processed in late summer. This will allow people to essentially purchase less than a quarter side of meat, which will cost less money.

A person could purchase just 10% of a side of beef, for instance, she said. The business is working with the Center for Rural Affairs from nearby Lyons on ironing out the various details of the share program, she said.

One thing Zeleny knows for sure is the local meat trend is not going away anytime soon, in her opinion. There are just so many positives for the consumers, she said.

"Fresh meat just tastes better, and you could save about $400 by buying a half side of beef with the similar cuts if you purchased them at the grocery store," Zeleny said. 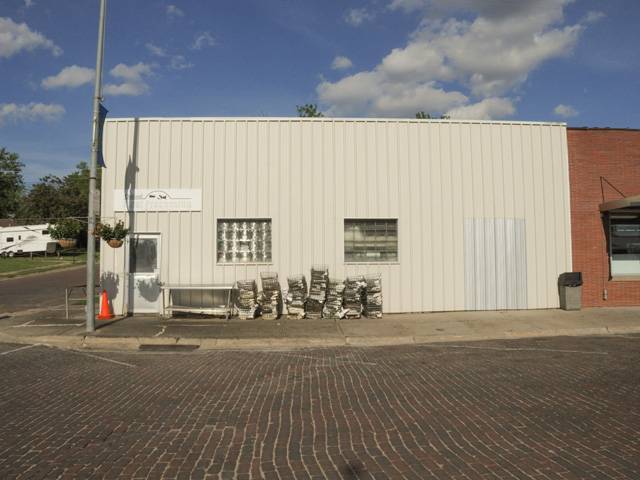