OMAHA (DTN) -- With areas of the High Plains already in severe drought and weather forecasts calling for worsening drought in some parts of the region, the strategic culling of cows is vitally important. With forages and feedstuffs in limited supply, many cow-calf producers will need to reduce their herd size in order to weather these uncertain times.

While culling cows that are open or just plain ornery are obvious, there are other approaches cattle producers can take. Bulls should also be considered when making culling decisions.

Viewing the U.S. Drought Monitor Map (https://droughtmonitor.unl.edu/…) shows some areas of D3 (Extreme Drought) and D4 (Exceptional Drought) in North Dakota and in eastern New Mexico into the Texas Panhandle. The Central Plains has areas of D1 (Moderate Drought) and D2 (Severe Drought) in various areas from South Dakota to Oklahoma.

The National Weather Service (NWS) is forecasting higher-than-normal temperatures for the entire contiguous U.S. for June, July and August, with just a few exceptions of the Pacific Northwest (https://www.cpc.ncep.noaa.gov/…).

"You cannot manage what you do not measure," Lisa Pederson, NDSU Extension livestock specialist, said in a press release. "Keeping records of traits your operation identifies are important is key to developing a strategic culling plan."

Some traits when considering which cows to cull would be ornery cattle, open cows, older cattle and thin cows. Cows that are thin will take more nutritional resources to cycle and breed back, according to Janna Block, NDSU Extension livestock systems specialist at NDSU's Hettinger Research Extension Center.

Other factors to consider when culling can include cows that calve later in the growing season, cattle with bad udders and feet, fence crawlers and poor performers and producers.

TO EACH THEIR OWN

Each cow-calf producer has his own thoughts about how to select which cows to cull and which ones stay.

Mike Manion, a rancher and cattle feeder from Hemingford, Nebraska, said the obvious candidates for culling would be those open and old cows. In addition, he also likes to get rid of those cattle who calve late, so his calf crop is more uniform.

Then the northwest Nebraska cattle producer will look at production as far as what kind of calf the cow will produce. If the cows have a bad attitude or an extra-large udder, they are more likely going to be culled, he said.

Manion said he has tried to keep better records on the health of his cattle, which also could help him with culling decisions.

"I think we have focused on growth so much that we've somehow bred the health out of them," Manion told DTN.

He pointed out a bigger calf that has been treated may not make a cattle producer as much money as a smaller calf that was not treated. If he treats a calf, he will not keep a heifer from that cow, he said. Manion said part of this philosophy comes from buying calves. He said he knows a lot of producers who are done buying a bawling calf, he said.

Ben Pelster, a cattle producer from Elise, Nebraska, said he will not send a cow to grass that doesn't have a calf on her or has bad feet, udder, disposition or any other structural issue. The only exception to this rule would be a first-calf heifer that loses a calf late for a reason out of her control. She will be put with the operation's replacements, rebred for resale but will not go back into the herd.

"We don't keep older cows," Pelster said. "We keep enough heifers to cycle older cows out and sell as pairs at eight to nine years old because we have a good market for them."

Pelster said his southwest Nebraska operation will not keep any cows that don't calve in the first 45 days of his calving period. Anything that calves outside of this perimeter are sold as pairs.

Gerald Stokka, NDSU Extension veterinarian, recommends cattle producers not forget about bulls when considering culling options. Once again, if the bulls do not help the operation meet its goals, they should be considered for culling.

"If bulls do not pass a breeding soundness exam or do not meet your operation's criteria, add them to the cull list," Stokka said.

Pelster said his vet has always been an advocate of a five-year-old bull should be the oldest bull on the place. He has tried to follow this suggestion, he said.

He raises at home his Red Angus bulls and has kept a few bulls longer just for a longevity experiment. These bulls were sound breeders up to about eight years old, Pelster said. 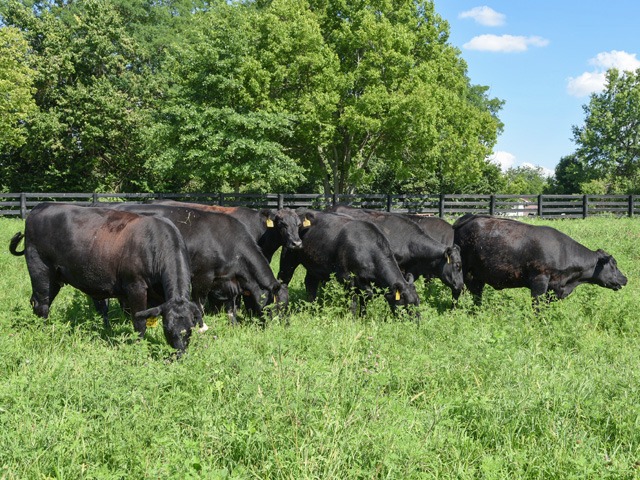