OMAHA (DTN) -- After speculation and concerns over President Joe Biden's goal to conserve 30% of U.S. land and waters by 2030, the White House on Thursday released a broad outline to encourage but not require greater conservation efforts across the country.

The Biden administration rolled out 30x30 as "America the Beautiful" to expand conservation efforts. The rollout comes after months of critical complaints filling a void of information. Republican governors, farm organizations, local officials and anti-government groups have leveled criticism that 30x30 is a "land grab" that would require new conservation measures for a large swath of the country.

With commodity prices reaching their highest marks in at least eight years, Biden's conservation proposals for agriculture will likely draw complaints over any program expansion that would be seen as potentially curbing domestic crop production. When USDA announced the higher rental rates and expanded CRP acreage, the National Grain and Feed Association cautioned against enrolling large tracts of productive land.

Reflecting some of the criticism that has been raised by conservatives of just what 30x30 would mean, the news release from the White House uses the word "voluntary" six times and "local" five times. A pattern emerges of "locally led, voluntary conservation" repeatedly throughout the news release and the report.

While the initial introduction doesn't create any new federal policy changes, White House officials, speaking to reporters, said the policies laid out in a 24-page report would be reflected in department budgets and commitments going forward. That suggests USDA would continue to put greater emphasis on conservation programs going forward.

Among the principles laid out, the plan includes "honoring private property rights" while supporting more voluntary efforts among private landowners. Addressing concerns that too much land in Western states is already federally owned and managed, the report emphasized "a clear recognition that maintaining ranching in the West -- on both public lands and private lands -- is essential to maintaining the health of wildlife, the prosperity of local economies, and an important proud way of life."

Following up on the Great American Outdoors Act, the National Park Service also is expected to soon announce $150 million program to build more parks in both urban and rural areas that are considered as underserved communities for outdoor space.

The White House report states the goal of the "America the Beautiful" plan is to pursue a "decade-long national conservation effort" to safeguard land and water. "The ambition of this goal reflects the urgency of the challenges we face: the need to do more to safeguard the drinking water, clean air, food supplies, and wildlife upon which we all depend; the need to fight climate change with the natural solutions that our forests, agricultural lands, and the oceans provide; and the need to give every child in America the chance to experience the wonders of nature."

Officials stressed agriculture could play a role by applying more conservation practices on working lands, including farms and ranches. They pointed to ranches in the Florida everglades, as well as state and federal conservation programs for farmers in the Chesapeake Bay. The White House also cited the opportunities for farmers to increase carbon sequestration practices.

Cabinet officials said the "call to action" on conservation would also boost the economy and increase jobs.

Vilsack said, "Farmers, ranchers and foresters are bearing the brunt of climate change." The White House effort to expand conservation "is a win for voluntary conservation practices on working lands," he said. Increased conservation efforts on the land are going translate into improving water quality in streams and rivers, he noted.

The report released by the White House calls for six major priority areas. Among the priorities were the goals for more agricultural conservation incentives in farms and forests. Other goals called for creating more parks and outdoors areas "in nature-deprived communities," supporting Tribal conservation and restoration priorities, expanding fish and wildlife habitat, increasing access for outdoor recreation, and creating jobs as part of these park or restoration projects. The White House again referenced creating the Civilian Climate Corps, a group similar to the Depression-era civilian conservation workers.

White House officials said a key goal of the plan is to help mitigate long-term climate risks, especially in coastal areas and other environmentally sensitive lands. Conservation efforts are among the lowest-cost strategies to help reduce destruction from increasingly extreme weather. That includes restoring coastal reefs and banks.

Conservative angst over 30x30 has grown since the president's executive order on climate change back in January, leading to repeated claims that the plan is a "land grab," a claim refuted last month by Vilsack.

In an editorial Thursday, the Omaha World-Herald said the Biden administration "needlessly created uncertainty and concern for agricultural producers by asserting an ambitious goal -- putting 30% of the nation's land and water in conservation status by 2030 -- without providing any practical guidance on how it would be accomplished." The result was an "information vacuum on this '30x30' proposal that has enabled critics to claim that a supposed federal land grab lies ahead."

The American Farm Bureau Federation last month called on the Biden administration to "act responsibly in conservation efforts." AFBF said farmers have more than 140 million acres enrolled in conservation practices, and any discussion about expanding conservation should include more input from farmers and ranchers.

Republican governors drafted a letter to Biden pushing back on the initiative as well. Nebraska Gov. Pete Ricketts, in a column last week, said the Biden-Harris administration wants greater federal control over water and land. Ricketts described 30x30 as a way to "either take away private property or to subject landowners to intrusive regulations." Ricketts also said the federal government has no constitutional authority to carry out a plan to expand conservation around the country. 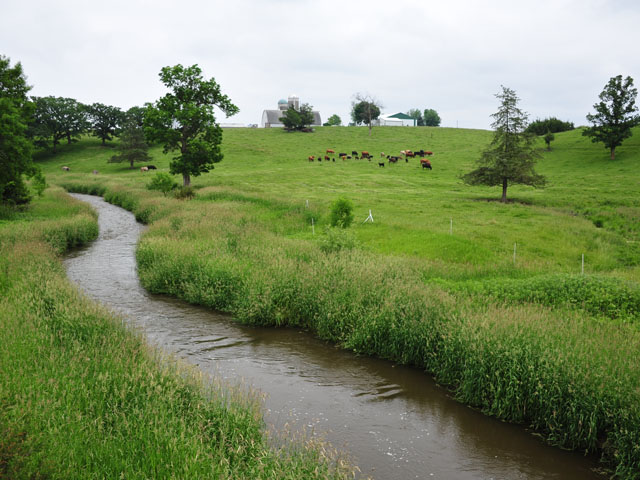