OMAHA (DTN) -- Cow-calf producers need to develop a drought management plan now before the dry conditions begin or worsen. Changing how the grass is grazed, the number of animals grazing and using other feed sources are all important aspects of drought strategies.

These were the subjects of a series of webinars titled "Preparing Your Ranch for Drought" by North Dakota State University Extension. The webinars can be viewed at https://www.ag.ndsu.edu/….

Most likely, a grazing plan should be put into place by May, according to Kevin Sedivec, North Dakota State University Extension rangeland management specialist. Nearly 91% of North Dakota is in some sort of drought designation, he said.

Among the early grazing strategies would be to supplement pastures or haylands with feed. Producers should price out and purchase these feedstuffs as soon as possible.

Producers could graze native grasses early and for longer time intervals if they are rotationally grazed. Grazing could even be done in strips, he said.

Sedivec said if drought continues in the Northern Plains in May, forage production could be reduced anywhere from 20% to 40%. Producers should minimize repeated years of overgrazing, he stressed.

If drought is still present in June, forage production could decline anywhere from 35% to 65%. If drought is present at that time, very little grass will grow, he said.

TAKE HALF, LEAVE HALF

NDSU Extension Livestock Stewardship Specialist Miranda Meehan said ranchers should follow the "take half, leave half" method of grazing. Leaving half of the plant material by weight will help better manage grazing resources, she said.

Producers can't graze past the growing point of the grass plants, as this will not allow for any regrowth, she said.

"Fifty percent should be left behind for plant vigor, with 25% that can be taken by the livestock and roughly 25% by trampling, wildlife, etc.," Meehan said.

Sedivec said if drought extends into July, forage production could be cut by more than half. Producers should begin to start implementing destocking plans, early weaning and any other strategies when it comes to handling drought.

By August, if drought remains, forage production could drop by more than 70%, and most plants will not be green and could even die. Producers should expect lower feed quality for forages, and they may even need to use other feed sources to maintain crude protein level for energy for livestock, he said.

Sedivec said producers should do a final assessment of annual forages in September for late-season grazing. Inventory of other harvested feed and crop residues should be done as well.

The estimation of forage in winter pasture should also be done in September. Grazing can be done at this point on pastures with any stored grass, he said.

Sedivec said one possibility for fall grazing would be to use crop residues. Calves should be weaned from cows before cows graze residues, as they are deficient in protein and nutrients such as calcium and phosphorous.

Planting cool- and warm-season annual forages can provide a good source of forages during times of drought, according to University of Nebraska-Lincoln (UNL) Extension Range/Forage Specialist Jerry Volesky. He's located at the UNL West Central Research and Extension in North Platte, Nebraska. Much like NDSU, UNL also had a series of webinars discussing drought management: https://beef.unl.edu/….

Cool-season annuals, which are seeded in the spring, include species such as oats, spring triticale, spring barley, field peas, annual ryegrass and several other legumes. These forage crops need to be planted from mid-March to mid-April, and yields will decrease if these crops are planted later.

Volesky said these cool-season forages can produce a significant amount of forage. UNL research in 2015 showed spring-seeded oats, barley and triticale yielded 4 to 5 tons per acre of forage.

Warm-season annuals include millet, sorghum, sudangrass, sorghum sudangrass hybrids, crabgrass, teff, corn and several legumes. These crops would be planted later in the spring or in the summer.

Another UNL study at the West Central Research and Extension Center showed warm-season forage can also yield fairly well, Volesky said. Under irrigated conditions, sorghum-sudangrass hybrids and forage sorghum could yield anywhere from 4.1 to 5.3 tons per acre, while millet and teff could yield 2.6 to 4.5 tons per acre.

As with cool-season forage, planting date is important, as later planting dates will lower yields, he said. Even the difference of just a couple of weeks could cause yields to drop significantly.

Some annual forages can be planted in late summer (late July through August) for fall and winter forage. These crops would be oats, barley, spring triticale, spring wheat, ryegrass, peas, turnips and other brassicas.

In addition, winter wheat, rye and triticale can be planted in late August and into September for some fall and winter forage but mostly for the following spring.

"If timed correctly, cool- and warm-season forages can even be double-cropped annuals," Volesky said.

While annuals can provide a source of forage, Volesky said there are some issues associated with using annual forages during drought.

Firstly, producers would have to decide between grazing or haying these annual forage crops.

Grazing is not as efficient as haying, he said. The grazing process interrupts plant growth and may reduce potential growth with trampling losses.

Volesky said he recommends cattle start grazing when the plants are at appropriate growth stages or at a certain height, and a simple rotation is most beneficial.

Another issue with grazing annual forages is the fatal disease grass tetany with the lush, green grass usually available in the spring. Producers need to provide cattle with a magnesium supplement for 20 to 30 days before grazing, he said.

High levels of nitrates can be found in the spring, summer or fall in drought-stressed crops, which can be deadly for livestock, he said. Forages can be tested to see what their nitrate level is.

"Other stresses like hail damage or even a frost in May on oats, for instance, can cause higher levels of nitrates in forages," he said.

Volesky said prussic acid poisoning is an issue that can arise in sorghum-related plants for several days after a frost in the fall. 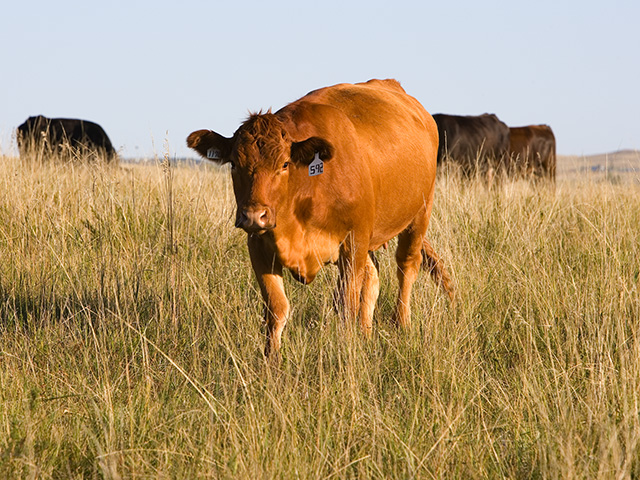