OMAHA (DTN) -- Kip Tom, the U.S. ambassador to the United Nations Agencies for Food and Agriculture (FAO), told farmers Wednesday they need to understand the growing debate between the U.S. and Europe over food systems.

Tom, a farmer from Indiana, was confirmed in 2019 to be the U.S. ambassador to the FAO in Rome, Italy. In that role, Tom oversees U.S. involvement in the FAO agencies and other related international organizations.

He spoke as the keynote for the Marcia Zarley Taylor Memorial Lecture, honoring DTN's executive editor who was the driving force behind creating the DTN Ag Summit but passed away in 2017.

Economic decline, extreme weather events, pests such as locusts and then a global pandemic have combined to increase poverty and raise the risks of higher food insecurity globally, Tom said. Just in Africa, 350 million people have become unemployed since March. "Imagine the size of the United States, all of sudden, becoming totally unemployed for people often making only $1.90 a day," he said.

Like others in the federal government, Tom is critical of a European Union initiative called "Farm to Fork" that focuses on lower pesticide use, increasing organic production and fallowing farm ground in Europe. The EU also wants to "export" that agenda to other areas of the world as well. Tom told farmers to pay attention to the European push, "and how they expect agro-ecology to be the solution to feeding a growing world, yet creating non-tariff trade barriers and putting food out of further reach from those who are most vulnerable."

Over the past several months, Agriculture Secretary Sonny Perdue and Chief Agricultural Negotiator Gregg Doud in the U.S. Trade Representative's Office have also each raised concerns about the Farm to Fork Strategy.

U.S. agriculture centers around innovation and new technology to boost production, Tom said. That focus has driven higher production for the past century. Yet, as an ambassador, he said much of his work and conversation with other ambassadors from 193 other countries is to correct perceptions about U.S. agriculture.

"Our global goal should be to produce more food with less land, not the other way around," Tom said. "We believe the U.S. model of science-based technology-focused agriculture -- that have helped propel modern agriculture to incredible levels of sustainable productivity -- will be critical to keeping pace with growing global demand while protecting our most precious natural resources for future generations."

Tom noted the U.S. and Europe right now are "bogged down in the highly politicized debate over competing agricultural systems." But global population doesn't have the luxury to waste more time because the challenges ahead are real and the stakes are high. Global food insecurity translates directly into massive migrations, political instability, extremism, smuggling of guns and drugs, and tragedies such as human trafficking, Tom said. These situations are common, but underreported. Right now, conflict in Ethiopia has forced 200,000 to migrate to Sudan, increasing food insecurity there as well. "So when people don't have enough to eat, their hunger affects us all, he said.

Touching on the locust plague that ravaged parts of eastern Africa over the past year, U.S. agencies pulled together resources with other organizations to push for better access to effective pesticides and sprayers, as well as develop new surveillance tools to monitor locust patterns, using agencies such as NASA and NOAA for data on soil conditions and wind modeling. It cost about $200 million but curbed the risk of putting as many as 450 million people into immediate need for food aid.

Looking through the lens of a Midwest farmer, Tom noted U.S. farmers have controlled fall army worms with Bt corn, but other countries remain reluctant to deploy those kinds of seeds to their farmers. "So we're really encouraging African experts and leaders to adopt Bt maize so they can have a simple, effective solution to fall army worm problems. Again, a problem that is causing the loss of lives and billions to their economies all across the continent of Africa."

Ideally, the Nobel Prize recognition of CRISPR gene-editing technology will ideally lead to a better path forward for developing countries to adopt crop-improvement technology, he said.

Coming back to challenges over the European Farm to Fork push, Tom said the EU's "singular approach" to food systems "could drive policy and create a global famine driven by a system that is an indulgence of the rich and indefensible scientifically and indefensible morally."

Tom told farmers to pay close attention to an upcoming UN food systems summit in 2021. Tom said the summit will focus on global productivity growth and improving nutrition, as well as functioning markets and opening up more trade in agriculture. The debate around technology will be a critical part of the challenge with Europe. Other major export countries are starting to align with the U.S. and push back on the EU Farm to Fork perspective, but U.S. farmers need to play a role in that dialogue, Tom said.

"We must push for more diverse voices at the table from farmers and producers to key players in the private sector, with innovations and resources to drive bold action," Tom said.

USDA's Economic Research Service (ERS) released its analysis of the Farm to Fork plan last month. The analysis concluded that input reductions would lower EU farmers' production by a range of 7% to 12% and affect their competitiveness in both domestic and global markets. ERS stated that adoption of the strategies for lower inputs "would have impacts that stretch beyond the EU, driving up worldwide food prices by 9% if only the EU adopted the plan," but prices would drive up significantly higher if the plan were adopted globally. Under a global scenario, ERS stated production would fall 11% and prices would rise 89%.

Globally, if every country adopted a Farm to Fork plan, annual food costs would rise per-capita $450, with a $512 increase in prices in the U.S. ERS also forecasts that 185 million more people would become food insecure under the plan with the biggest impacts in Africa and parts of Asia.

Tom's comments were part of this year's DTN Ag Summit, which took place virtually Dec. 7-9. The session, along with all the other Summit programming, can be accessed through Jan. 8. Summit registration information is here: www.dtn.com/agsummit20

Registrants can also still participate in engagement activities that earn points toward a number of prizes, including free registration to the 2021 DTN Summit, planned for December 6-8 in Chicago. 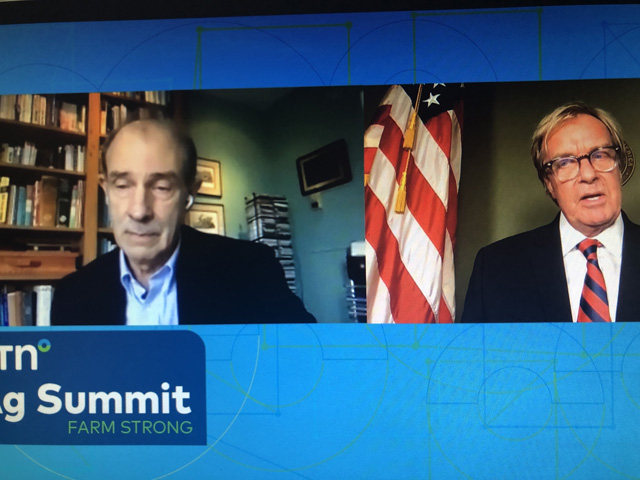