OMAHA (DTN) -- With much of the center of the United States in various stages of drought, many beef cattle producers in the region will need additional forages. An option is to utilize silage as a feed source.

While most will think of corn, there are other crops available that can make good silage. Regardless of crop, drought stress affects silage production negatively, affecting yield and quality, explained Texas A&M AgriLife Extension and Research Extension Agronomist Jourdan Bell, who's based in Amarillo, Texas.

Bell presented a webinar on silage production and the impact of dry weather and limited water recently. University of Nebraska-Lincoln (UNL) Extension, Lallemand Animal Nutrition, and Iowa State University (ISU) Extension and Outreach sponsored the Silage for Beef Cattle Conference in 2016 and 2018 in Mead, Nebraska. Because of the COVID-19 pandemic, the 2020 conference became a series of four, one-hour webinars, starting with Bell's talk.

Many beef cattle producers harvest and feed silage every year, while others utilize it only in drought years when dry weather damages crops, such as corn. Bell said drought-damaged crops cut for silage as roughage for feeding beef cattle is common practice, but for those who cut silage for dairies, high-quality silage is needed.

Water-stressed silage will have lower moisture and higher dry matter levels, which affects the nutritional value of the feed and packing ability, she said. Average moisture levels for good packing are around 65% moisture and 35% dry matter.

Bell said one potential issue with drought-stricken crops used for silage would be nitrate poisoning -- water-stressed forages can accumulate nitrates that, at higher levels, can kill livestock. Bell said nitrates tend to build up at the bottom of plants, so cutting silage 6 inches above the ground instead of 3 to 4 inches will help to alleviate this danger.

Bell said dry conditions will affect both the dry matter and shrink (losses during ensiling) levels of silage.

Shrink results from the fermentation process and spoilage losses and scale and dry matter errors as the silage is delivered. Lower-quality silage could result in higher levels of shrink, she said.

Drought can also affect crops differently across a single field, Bell noted. The reasons for this could be compaction, deep tillage and wet field conditions at planting.

Bell said corn is the silage crop of choice because it's high in energy, and the grain content and stover digestibility are also great. In addition, the high yield potential of 27 to 32 tons per acre makes the crop appealing in silage production.

Failed corn is often chopped for silage, but a poor-quality forage is going to produce poor-quality silage, she said. Quality in corn silage is directly related to the amount of grain production.

The silage relative forage quality (RFQ) decreases dramatically without grain. Bell said research shows RFQ can be decreased by about 330% without any grain.

If there is a risk of drought, producers should consider forage sorghums for silage production, Bell said.

There are several different types of forage sorghums to select from, including conventional, brown midrib (BMR), photoperiod sensitive and brachytic dwarf hybrids.

Among the advantages of brachytic dwarf hybrids is they have reduced internode length, which limits lodging concerns. In addition, these hybrids can produce a stable amount of tonnage and the plant is leafier.

"With sorghum, we are able to achieve probably four to five tons more forage per acre in this water-limited environment (compared to corn silage)," she said.

Harvest should occur earlier than corn silage, usually in the soft dough stage, she advised. The target dry matter level at harvest should be around 30% to 35%.

Harvesting small grains for silage presents some differences compared to corn and sorghum silage, she said.

"Ideally, small-grains silage should be harvested at the early dough stage," Bell said.

Bell said Texas A&M AgriLife Extension conducted a wheatlage trial in the Texas Panhandle in 2019 and 2020. The first year, there was ample moisture, while it was considerably drier in the second year of the study, she said.

The results of the trail showed harvesting at the soft dough stage in 2019 produced roughly 7 tons per acre. For the harvest in 2020, the yield was closer to 4.5 tons per acre, Bell said. 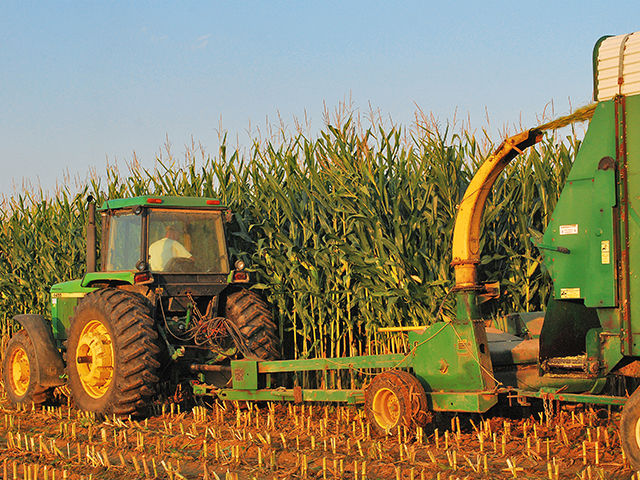