OMAHA (DTN) -- A pair of Midwest farmers testifying before Congress about the U.S.-China trade agreement on Wednesday had different takes on the trade dispute: One saw optimism on the horizon, while the other pointed to the negative impact of tariff battles over the past two years.

The House Ways and Means Committee held a hearing on the trade deal as majority Democrats criticized the trade deal for what it doesn't do, while Republicans praised President Donald Trump for his willingness to take on China and reach an agreement.

The trade deal, which went into effect earlier this month, calls for China to buy $200 billion a year from the U.S., including an average of $40 billion a year in agricultural products. China has made some moves in recent weeks to lower or reduce tariffs on U.S. agricultural commodities and reopened imports of U.S. poultry.

In opening testimony, Tim Dufault, a soybean and wheat farmer from Crookston, Minnesota, pointed to 595 Chapter 12 bankruptcies in 2019, "which marked the largest increase since the great recession." Dufault also noted hard red spring wheat exports to China had fallen from 41 million bushels in 2016 down to roughly 1.2 million bushels in 2018. Further, Dufault said soybean prices "have been decimated."

Lower prices for commodities have made it harder for farmers to get operating loans and have caused producers such as himself to avoid buying equipment, in order to keep costs down. Many farmers also have had to turn to alternate lenders with significantly higher interest rates, Dufault said.

"I want to remind you just how patient American farmers and rural communities have been," Dufault said. "We are now nearly two years into a trade war that we were told would be good and easy to win," he said, paraphrasing a tweet from President Trump from March 2018. "Time and time again, we have been told to hold out for a deal that would make all of the pain worth it."

Dufault said nearly all farmers would agree "China has been a bad actor," but the phase-one deal promises larger sales though tariffs remain in place.

Richard Guebert, president of the Illinois Farm Bureau, credited the Trump administration with helping farmers manage through the trade wars through $28 billion in trade aid over the past two years, mainly through Market Facilitation Program payments.

"We would much rather have expanded trade, and that's why I am optimistic about the recently signed phase-one China agreement," Guebert said. The boost in sales to China, if they come to fruition, "will provide a huge and timely economic lift to American agriculture," he said.

Guebert noted USDA has yet to factor in the prospect of $40 billion in agricultural exports to China in its forecasts. Further, the coronavirus and large Brazilian exports to China right now have meant that U.S. commodity prices have been trending downward since the phase-one deal was signed.

"We certainly know the markets have yet to move, but farmers and ranchers all across America are optimistic," Guebert said. "We understand that there is just the beginning of an exciting new chapter, and we patiently await the benefits of this new agreement."

Guebert also said late in the hearing that one of the problems battling China in the World Trade Organization was that it takes years to win a case. The phase-one deal allows the U.S. to return directly to tariff threats if there is a problem. Guebert saw that as a "monumental" shift in accelerating trade disputes.

"I think with this phase-one agreement, we see with the enforcement the ability to put tariffs on almost immediately, or at least bring folks to the table to try to resolve them diplomatically, and get to a point where we can move on, is monumental," Guebert said. "And maybe as we look to other trade agreements around the world, maybe this is the new way of putting agreements together."

Rep. Kevin Brady, R-Texas, ranking member of the committee, pointed to provisions in the phase-one trade deal, and highlighted agriculture, saying, "It will be a record-breaking acceleration of U.S. exports into China."

Rep. Bill Pascrell, D-N.J., ripped into the deal for shutting farmers out of foreign markets and noting the phase-one agreement does not address big-picture challenges such as currency manipulation. Pascrell also took a shot at the prospect of further MFP payments.

"Now that China is looking like it is backing out of its pledge to purchase U.S. farm goods, Trump is embracing socialism to bribe farmers in the United States of America. It's too little, too late."

When asked about Chinese exports later in the hearing, Dufault also pointed to a tweet from Trump last Friday in which the president suggested a new round of MFP payments. Dufault said he doubted that China could import almost double its highest dollar volume from the U.S.

"We're skeptical in agriculture on that," he said. "Yes, we have a phase-one agreement, and that's good, but if it is so good for agriculture, why did the president on Friday announce he wants to continue these aid payments to farmers for the foreseeable future?"

Pushing back on Democratic criticism of the deal, Rep. Jason Smith, D-Mo., said members of Congress and previous administrations frequently complained China did not play by the rules.

"When somebody tries to do something about it like President Trump, they complain that it's not enough," Smith said.

Jodey Arrington, R-Texas, said farmers in his district share Guebert's sentiment that the last few years have been a painful transition to reset the relationship with China

"It hasn't been easy," Arrington said. "It's been painful, but my farmers in west Texas see greener pastures on the other side for their children and their grandchildren. And they know that it's going to be painful. Like all good, hard-working, God-fearing farmers, they know that sacrifice is part of the American ethos, it's part of the culture of rural America and it's what you do every day as a farmer."

While farmers may be optimistic on the China deal, they might not be expecting immediate rewards. The American Farm Bureau Federation released an informal survey on Wednesday, stating that farmers are "cautiously optimistic" about the trade deals.

For more on the AFBF survey on farmer outlook, visit: https://www.fb.org/…. 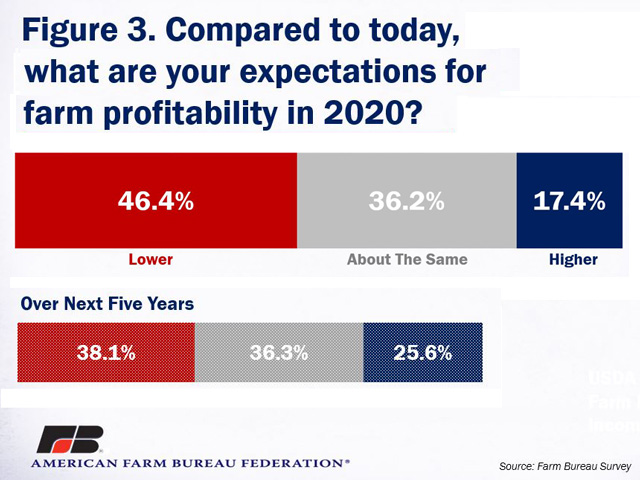