INDIANAPOLIS (DTN) -- With U.S. agriculture dependent on global trade, it will become more critical over time to demonstrate sustainability goals in the future for companies and farmers to maintain export competitiveness, a former chief agricultural trade negotiator told an audience of ag sustainability experts last week.

Darci Vetter was former deputy undersecretary at USDA and the chief agricultural negotiator for the U.S. Trade Representative's Office during the Obama administration. She now is global lead for public affairs for Edelman's North American Food and Beverage practice.

Vetter spoke Nov. 21 at the Sustainable Agriculture Summit in Indianapolis.

Increasingly, food companies are seeing consumers press for more information about the environmental footprint for the food, fuel and fiber in those products. Governments also are looking at the same sustainability targets, especially as they work to meet the goals of the Paris climate accord.

"They are figuring out how they are going to measure that," Vetter said.

The tricky part of measuring these goals is that a good portion of goods and services come from trade, which needs to be accounted for when other countries consider their emission targets.

"So for U.S. agriculture, where we are a really export-dependent sector, how do we think about the way we set our own metric standards to plug into the metrics or systems those companies and those governments are going to be using, not just here in the United States, but around the globe," Vetter said.

Governments also are making agreements with each other and setting priorities and targets on the sustainability side. Those rules on environmental laws largely are meant to ensure a level playing field so countries will enforce those laws rather than ignore them to make products cheaper.

Another question looking ahead is how the World Trade Organization will treat these standards, assuming the WTO system is maintained going forward. The WTO is about to face some major tests because of challenges as the Trump administration has blocked the appointment of new appellate judges. The WTO will be down to just one appellate judge after Dec. 10 when two judges face the end of their terms. The WTO Appellate Body requires three judges to rule on a country's case, so it will be blocked from hearing further cases or issuing decisions.

Vetter defended the WTO, saying U.S. agriculture benefits from a trading system based on rules. Still, it's not clear how countries will implement their commitments to the Paris agreement and how that could be fought out in the WTO.

"The real question is if we don't have a national framework for our producers to slot themselves into about reporting and recording their carbon emissions -- or in the case of agriculture what we might be doing to sequester carbon and getting credit for that," Vetter said. "So we are going to have to figure out how to track that ourselves and communicate in a way that is transparent and verifiable to our trading partners so we don't lock ourselves out. I think we have the tools to do that, and I think industry in the U.S. can make sure those trade lanes stay open."

Companies, though, need to be early actors in accounting for the use of natural resources and establishing their own metrics because the U.S. doesn't have the government driver to create those reporting requirements.

One core position in the WTO is that countries cannot treat foreign products differently from domestic ones. This was actually the argument Canada and Mexico used against livestock segregation because of the U.S. country-of-origin labeling law for meat. This rule also works on environmental standards.

"So you can't just say, 'We think our country has it under control and the other county is dirty, so we will just ban their products.' So no soybeans from outside the United States or whatever it might be," Vetter said.

Europe decided to set goals for renewable biofuels, but did not have criteria for feedstocks. A lot of the biofuel was coming from Southeast Asian palm oil in areas that had destroyed tropical rain forests to farm that palm oil. Europe then set up criteria for its feedstocks. The U.S. and European Union then spent years going back and forth over whether U.S. conservation compliance rules met EU's new standards. The U.S. government began to look at the EU initiative largely as a trade barrier.

"So when you try to form these criteria, they can end up becoming political trade barriers instead, and it can be really difficult to compare one country's regime to another," Vetter said.

The urgency to address climate change, as well as the Paris climate accord, puts the global trading system in a better position to find a solution to the environmental standards for both imports and exports. As more countries set these standards, global companies are going to be asked to provide more information on their imports, Vetter said.

"Look for a lot of action there in the future about how we address the sustainability footprints of products cross the borders," Vetter said. She added, "So, you are going to be asked to meet benchmarks for manufacturers and retailers so they can show they are meeting their target goals. That is going to become more and more common across more countries."

At least some U.S. agricultural export competitors may have an advantage over the U.S. because their countries are making binding commitments and establishing national frameworks for addressing climate goals.

"For an export-dependent country like the United States that doesn't have the same national infrastructure because our country is not taking this action right now, we need to know how we will be measured by our important customers and make sure we are aware of that," Vetter said.

Agricultural exporters should have metrics for carbon or water intensity that are data driven, quantifiable and transparent. Companies need to show "how are we carefully documenting the progress we are making," she said.

It's also one thing for industry to say they are sustainable in different ways, it's another when credible third-party validators are able to provide a seal of approval. Outside validation will be critical for credibility. That includes credibility when a process or technology does actually meet the goals. As companies and countries move ahead, Vetter said, some goals won't be met on time for various reasons. Natural disasters, for instance, can wreck such goals, as well as changes in production decisions.

A third-party validator may say, "They set an ambitious goal and the road block they hit was a really valid one that they are working to overcome," Vetter said. 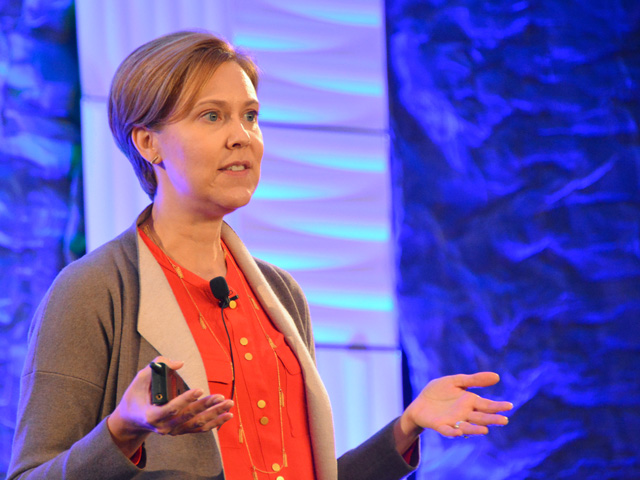