OMAHA (DTN) -- Research being done on low-lignin alfalfa could help producers in many ways. The benefits include having more flexibility on when they cut their alfalfa, growing the forage with less water, and earning higher prices as cattle can better digest the alfalfa.

Researchers from Kansas State University Extension, as well as the University of Nebraska-Lincoln (UNL), received $500,000 from USDA's National Institute for Food and Agriculture (NIFA) for a two-year study. They will explore how the low-lignin alfalfa grows in different field conditions, such as in drought. In addition, feeding trails will be conducted to study increased digestibility, an advantage of the alfalfa.

"Animal performance, especially milk and meat, is heavily related to digestibility," said Doohong Min, KSU assistant professor of agronomy, in a KSU press release (https://www.ksre.k-state.edu/…). "That's why it's so critical to lower the lignin content in alfalfa."

Lignin is the component of plants that forms key structural materials in the support tissues. Lignins are important in the formation of cell walls.

While it helps to give plants strength, lignin also limits digestion of alfalfa in ruminant animals. Low, or often called reduced, lignin varieties of alfalfa will allow higher rates of digestibility.

There are two main varieties of reduced lignin alfalfa, according to the University of Minnesota Extension: https://extension.umn.edu/…

The first is HarvXtra, a genetically-engineered variety produced by a joint effort of Forage Genetics International (FGI), the Samuel Roberts Noble Foundation and the U.S. Dairy Forage Research Center. It contains about 12% to 18% less whole plant lignin and has improved cell-wall digestibility.

The other variety is Hi-Gest 360, by Alforex Seeds. It is the first-patented reduced-lignin alfalfa variety developed through conventional plant breeding. Hi-Gest contains 7% to 10% less lignin than conventional alfalfa varieties.

The advantage of low-lignin varieties of alfalfa is mainly three-fold, according to Jeff Jackson, alfalfa and forage specialist for CROPLAN by WinField United.

The first two advantages, increased forage quality and widened harvest window, are somewhat related. Its improved forage nutritive value may lengthen the time period when alfalfa can be harvested by livestock producers, Jackson told DTN in an interview.

Quality should be increased considerably with the same amount of production, he noted. Whereas 10% blooms is an important time to cut alfalfa to maintain quality in conventional production, this visual benchmark is not that important in low-lignin, he said.

"This technology can give producers some harvest flexibility they don't have with conventional alfalfa," Jackson said.

In addition, widening the harvest window could result in fewer cuttings in a growing season -- this gains higher forage quality with the same tonnage, yet lowers harvest costs, he explained.

The last advantage of low-lignin alfalfa would be the increased feeding value. Jackson said he has seen a 30-point increase in quality in a relative feed quality (RFQ) test with these varieties of alfalfa.

"This increase in quality very easily could be a $30/ton increase in the value of the hay," Jackson said. "Commercial hay growers could almost certainly benefit from growing it."

However, forage producers should also consider low-lignin alfalfa seed will be more expensive than conventional alfalfa, and some additional management practices will need to be done with these varieties, he added.

KSU research includes growing low-lignin alfalfa varieties to see how well they do under a variety of environmental conditions.

Krishna Jagadish, KSU associate professor of agronomy, will grow alfalfa under rain shelters, where the amount of moisture can be controlled. The goal is to determine if the plant can maintain low levels of lignin in all moisture conditions, she said.

"If farmers are able to reduce a certain amount of water, especially in southwestern Kansas (where two-thirds of the state's alfalfa is grown), then there is a potential for water savings," KSU's Min said.

Barry Bradford, a KSU professor of animal science, and Paul Kononoff, a professor of dairy nutrition at UNL, will study the nutritional value of low-lignin alfalfa in cattle. The duo will do feeding trails with 60 lactating Holsteins and 12 lactating Jerseys to determine if low-lignin alfalfa has an impact on diet digestibility or on yields of milk, milk fat and milk protein.

Bradford said these feeding studies are important because there has been limited studies in the U.S. on the effects of feeding low-lignin alfalfa.

"What nutritionists have been forced to do is take what we know about feeding corn silage and apply that to feeding (low-lignin) alfalfa," Bradford said.

Low-lignin alfalfa could be sold at a higher price if it can be shown it does indeed improve an animal's production, he said. 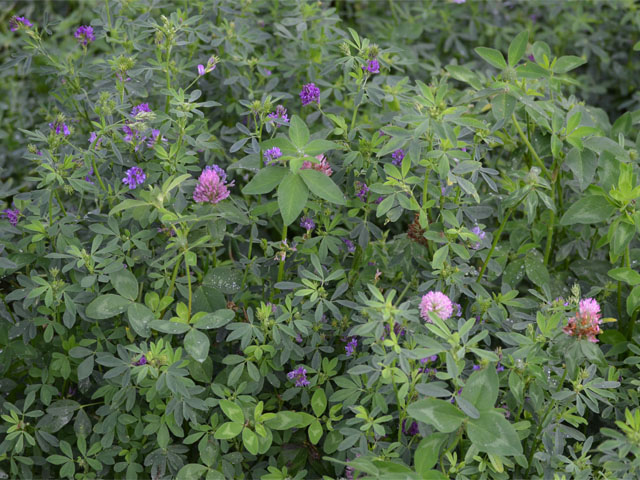