MOUNT JULIET, Tenn. (DTN) -- When North Carolina farmer Jacob Parker went on his first trade mission nine years ago, he thought it was probably going to be a waste of time.

"But I soon realized after meeting a few customers how important it is. They want to see the face of an American farmer. They want to see the person who actually produces the soybean," he said on a press call with reporters from the sidelines of the 15th annual Southeast Asia U.S. Agriculture Cooperators Conference in Singapore.

The event, which is co-hosted by the U.S. Soybean Export Council (USSEC), U.S. Grains Council (USGC) and USDA's Foreign Agricultural Service, brings U.S. farmers such as Parker and end-users together to help build and solidify trading relationships. It's a mission made even more critical by the ongoing trade war with China.

"U.S. soybean farmers have been impacted by export uncertainty and trade tensions, and while the short-term aid they have received is helpful, our farmers really need stability and long-term solutions," USSEC CEO Jim Sutter said. "We're working to provide that stability by building demand and expanding global market access for U.S. soy products in markets aside from China. This means building on relationships abroad and investing in new ones in evolving and growing markets. Southeast Asia is a great example of where we see a future for U.S. soy."

The region, which includes countries such as Vietnam, Thailand and the Philippines, has a population of around 650 million people that's expected to grow to 690 million by 2025. The region's also seen an increase in protein production, primarily through swine and aquaculture, which require more feed ingredients.

When the first round of tariffs went into effect last year, Sutter's organization drew up a plan that looked at what it would take to replace the lost demand from China. It focuses on countries with large populations, low protein consumption and growing economic activity.

"I don't want to be overly optimistic and say it will be easy to achieve that," he said. "I think it will take some years of time, but the U.S. has some strong advantages and we're out talking to buyers around the world."

The organization has held a number of events to introduce current and potential buyers to the benefits of U.S. soy, and Sutter said those programs are beginning to show results. "We're seeing our market share going up in virtually all markets around the world where we're doing that," he said.

While Sutter thinks the trade war with China will eventually end, it will most likely create lasting changes in global soybean trade.

"A consequence of the trade war is a growth in production and the strengthening of our competitors in Brazil, other South American countries and in other places like the Ukraine and potentially Russia," he said. "So certainly it's a worry that once they gain a foothold in those markets it will be very difficult for us to regain all of that back."

However, if USSEC's work to expand and develop demand in new markets is successful, he doesn't thinks it will be as important to recapture the full share of what the U.S. had in China.

"I think we probably won't do that. I think it's probably changed, but I hope that we will have stronger positions in other markets so that for U.S. soybean farmers there will be strong demand that will take away all of the production that U.S. soy producers want to put on the market in any given year." 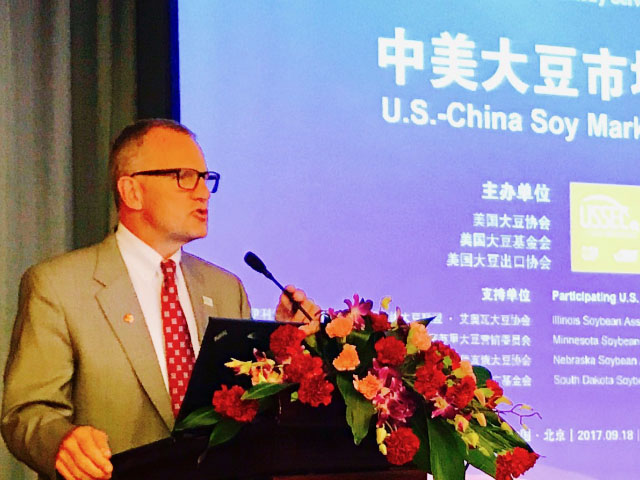