Florida ranchers say you can't precondition calves in their state. They blame it on an abundance of heat, humidity and mud. Don Quincey proves them wrong 15,000 head at a time.

Granted, this cattle business is based at Chiefland, in the northern part of Florida, but there's no shortage of heat and humidity, not to mention lightweight, high-risk calves. Yet, since 1992, Quincey's preconditioning operation has turned out healthy calves. And his strategies for enticing stressed calves to eat and drink apply anywhere.

"Nutrition and environment are the two most important things," Quincey says. His formula for preconditioning success starts as soon as calves arrive, with a goal to get them onto grass traps as soon as possible and give them a place to cool down, eat and drink. All calves are vaccinated for both respiratory and bacterial diseases, dewormed and castrated and dehorned, if necessary. They receive an electronic identification tag, a numbered ear tag, and a brand, if the owner specifies. If they are lightweight calves that have been through a sale barn, they also receive a prophylactic dose of antibiotics.

After processing, calves go to 3-acre traps. "If they are little, they'll bawl for four or five days, then we'll move them to 20-acre grass traps," Quincey explains. They stay on those pastures in groups of around 200 for 45 to 90 days.

The grass does more than keep the calves out of dust and/or mud. It is a key part of the nutritional program. Quincey's forage of choice is Tifton 85 bermudagrass, a high-quality hybrid that can average 18% crude protein (CP) and 73% total digestible nutrients (TDN) into early November. During slack times, it is baled for haylage or dry hay.

"Unlike bahiagrass, bermuda mends and covers bare ground, and the nutrition is much better," he notes. "We don't have to use much fertilizer, the cattle provide that."

While high-quality forage provides grazing during the growing season, the mainstay of the calves' diet comes from a carefully balanced total mixed ration (TMR). "We feed 15 to 16% crude protein and start in the high 70s on TDN," he says.

Dan Scruggs, managing veterinarian for Zoetis, says the animals' immune system runs on protein and energy. If calves don't get enough protein in a ration to support the immune system, muscle is degraded.

Quincey's go-to ration ingredient is cottonseed hulls and locally grown corn. "Even though it doesn't have much nutritional value, we'd have a hard time replacing cottonseed hulls from a gut standpoint and pure palatability," he says. "We feed cracked corn, as coarse as we can grind it."

The TMR also includes chopped hay, or haylage, and a mineral pack. Calves start off at around 1% of their body weight for the first seven to 10 days and are at 2% by Day 14.

Next, they transition to corn silage, sorghum silage or haylage. Quincey shoots for gains of 1.75 to 2 pounds a day for the starting period and 2.25 to 2.5 pounds daily during the growing phase.

"Don't hurry the cattle, read them," he stresses. He explains a load of 800-pound steers in a Nebraska feedyard may only need three days on a starter ration, while a load of commingled lightweight Southeastern calves that have had a long haul may need 30 days.

"Hurrying cattle may be the single greatest threat to their health," Corners says, adding, "be mindful of the dry matter and energy differences in rations." He recommends using a crossover ration, if possible, or mixing the starter and grower ration together while gradually switching to the grower ration.

Quincey believes how he feeds is just as important as what he feeds. "Calves hang out in different places in different pastures. We watch and make sure the feed bunks are near where they loaf," he says. "We don't try to feed small calves with fenceline bunks, although it would be easier for our feed truck drivers. We wean a lot of 200- to 300-pound calves, and we don't want them to go through mud to feed."

Scruggs is a fan of open troughs such as the ones at Quincey's operation. "There is too much competition for self-feeders," he believes. "Feed twice a day if possible, especially when good grazing is limited."

Along with a high-quality, palatable ration, Quincey is a fanatic about water. Troughs are kept full and clean. And he acts quickly if new calves aren't familiar with water troughs.

Scruggs adds calves arrive needing water, and it sets them back when they don't know how to drink or can't quickly reach a water source.

"They probably arrive with a 10% shrink off the cow; they are already dehydrated. If there is a 100ºF heat index, and they are waiting to drink, there isn't a vaccine or medication that can fix that," he says, adding extra water tanks those first few days can be more important than bunk space.

Corners says enticing calves to drink out of troughs can be challenging, so consider a lure. "Some people put little yellow plastic ducks in the water troughs," he says. "Calves come up out of curiosity and discover the water."

Quincey keeps death loss on those high-risk 200- to 300-pound calves between 5 and 6%. That number is typically lower on calves from first-calf heifers straight from a ranch, even though they might only average 225 pounds. His fee to precondition includes yardage, feed and medicines, and varies based on the set of calves and their needs. A normal range is around $135 per head for a 45-day preconditioning period, though he notes it could be as low as $90 or as much as $180. It all depends on what a calf needs to get it where it needs to go. 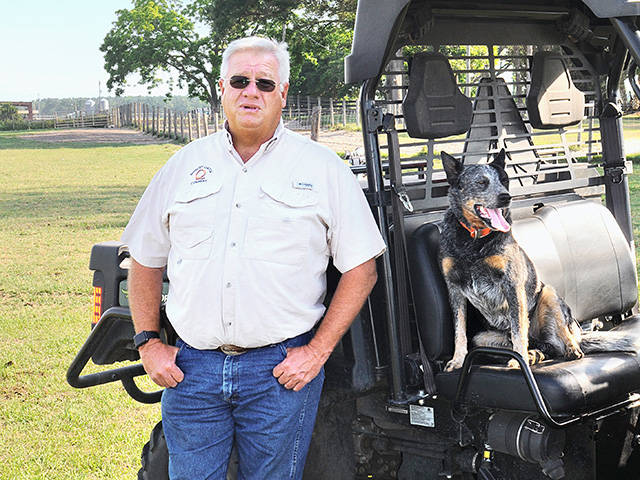