Brisket prices and demand are climbing rapidly, reflecting a surge of popularity for this mainstay of Texas barbecue.

David Anderson, agricultural economics professor and AgriLife Extension economist at Texas A&M University, said he and others anticipate a record amount of total meat production in the U.S. in 2019, according to a news release from the university. But items like beef briskets, bacon, chicken wings and hamburgers have shown particular strength in recent years.

"For the particular cuts of briskets, demand is really skyrocketing," Anderson said. "We are seeing an increase in prices because of that demand, even though supply is growing." According to Anderson, the comprehensive cutout brisket value was $213.47 per hundredweight as of the end of May--up 19.4% from the same week in 2018.

Alan Caldwell, owner and pit master of Fargo's Pit BBQ in Bryan, Texas, said prices have climbed over the past few weeks. That added cost of a brisket has had challenging effects for businesses like his.

"We don't want to adjust prices just yet," he said. "We'll see if this thing levels out by the time the students get back [in August]. Then we'll make that decision. The meat is the backbone of the barbecue, and it's expensive. It's that time of year for barbecue, but it's expensive right now."

Jeff Savell, a university distinguished professor of animal science at Texas A&M, said the state's top barbecue places are using high-quality, "top-choice" brisket, which is the upper part of the choice grade. He explained there is less top-choice brisket being produced in major beef production and packing areas when compared with "choice" or "select" grades. According to the news release, the four big states affecting that supply are Texas, Kansas, Nebraska and Colorado.

"There are places all over the country and all over the world that use brisket, but the biggest part of the briskets that we know these major companies produce—especially these high-quality ones-are shipped to Texas," Griffin said.

He added some national chain restaurants have added brisket options. They may use lower-grade options, which has also impacted the market as a whole and increased brisket demand.

U.S. Department of Agriculture data shows wholesale brisket prices jumped to a record of $2.39 per pound, June 3rd. The price climbed about 11% percent over the past 12 months.

Anderson explained briskets initially grew in popularity because of their affordability, but today the cut is the third-most expensive from a cattle carcass.

"They respond very well to low-temperature cooking over a long period of time," Anderson said. "It has gone from something very low-priced to now there are only two cuts more expensive than a brisket--the rib and the loin, or the steaks and high-value stuff."

Savell added barbecue consumption in Texas is nearing unprecedented levels, even compared to other popular cuisine in the state such as Tex-Mex. He cited YouTube videos, newspaper and magazine articles and television specials as evidence of the industry's popularity, as well as the long lines and road trips consumers are willing to accept to enjoy good brisket. 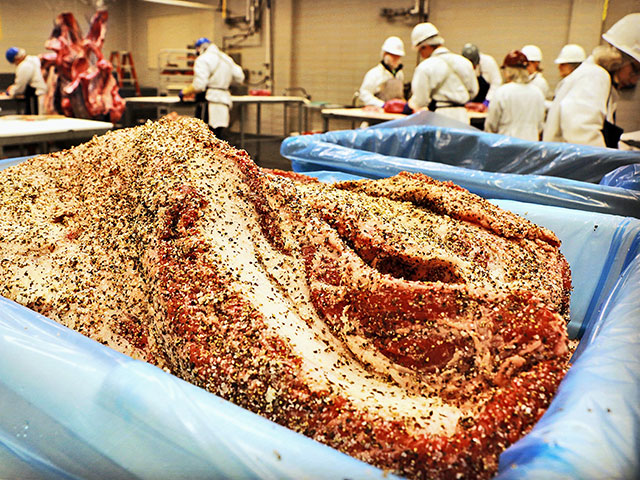