OMAHA (DTN) -- When recent flooding hit Catoosa, Oklahoma, a group of cowboy buddies joined together to help the people of their small town, especially farmers, any way that they could.

Northeast Oklahoma was one area hit hard this spring by what meteorologists called 500-year floods. Heavy rains during the end of May caused the Arkansas River to overflow and flood several small towns, including Catoosa, Oklahoma.

When heavy rains rushed in overnight at one point, causing the Arkansas River to flood, the streets of Catoosa turned into rivers. Soon after the flooding began, Catoosa resident Cory Conley realized he fared much better than others in his small town. After checking that his 50-head herd was accounted for and safe on a hill in his pasture, he shared a post on Facebook on May 26 offering help to those around him. "*Attn* If you need help moving livestock contact me. We've got horses, trailers, boats and hands on standby," Conley wrote in the post.

Comments immediately started flowing in from people asking for help, and Conley's friends, Hunter Webster, Shane Olson, and Casey Thomas, were eager to help in the efforts.

"We didn't know if any of this would work, but we couldn't just sit around and do nothing." Conley said.

The men set out on boats and horseback, and in some cases, they were able to use a truck and trailer, making the mission a little easier. The men worked to save the many cattle that were swept into the currents and away from their herds.

Many of the pastures had become lakes. There were very few small, grassy areas remaining, and that was where many of the cattle were gathered, Conley said. With floodwater separating ranchers from their herds, cattle were not able to get the food and care they needed after the event.

Conley said most of their rescues included many head of cattle that had been stranded or washed miles from their homes. On one particular mission, the men were out in boats and found two stranded cattle. The cattle were branded, so the men knew just where they had come from -- a ranch 11 miles away, Conley said.

In addition to cattle, Conley and his friends were able to save a number of donkeys and horses, both large and miniature. The miniature ponies had water up to their heads and were struggling to stay afloat.

Conley said, when he and his friends rescued animals by boat, they worked to get them to higher ground. However, if they could reach the animals by truck and trailer, they loaded and hauled the animals to nearby farms for care.

As their search-and-rescue mission continued, more volunteers joined in the efforts.

"It was cool to get somewhere and see all of the people there to help," Conley said.

The men were able to help reunite cattle with a number of people. Unfortunately, though, they weren't able to save all of the animals. Many cattlemen lost large portions of their herds. One producer, in particular, had 280 head just before the flood but is now down to just 11 head.

"There were a lot of mixed cattle -- so many that were from different farms and ranches that were all just mixed together," Conley said. "There were also a lot of cattle lost and dead. There is a lot of groundwork and handwork to be done after the floods. So many lost their houses and everything they had."

Arkansas was another state hit hard by the widespread floods. The Arkansas River reached a historic flood level due to heavy rains throughout the state. Cattle producers there were forced to take extreme measures to care for their herds, including enlisting the help of the Arkansas National Guard.

The Guard used two helicopters to airlift hay bales donated to a local humane organization to cattle stranded along the Arkansas River. Over the span of two days, they had delivered 153 bales to cattle in need.

The Arkansas Cattlemen's Association shared a post on Facebook highlighting the work of volunteers to help those affected by the floods: "In the midst of such an overwhelming disaster, it's easy to focus on the bad. But this serves as a reminder that there is definitely still good in the world."

NOT SO CALM AFTER THE STORM

Though Arkansas River levels have begun to recede in Oklahoma, many farmers are still seeing a great deal of standing water in their fields and pastures, Conley said.

Dr. Heidi Ward, assistant professor and veterinarian with the University of Arkansas Cooperative Extension Service, said although the storms have passed, the remaining floodwaters still pose a health risk to livestock.

"By far, the most immediate threat for cattle during flooding is limited access to clean water and food sources," Ward said. "If cattle are closed in by floodwaters, they can be completely cut off from their food source. Another threat is exposure to pathogens and toxins in the water. Contaminants in floodwater may include bacteria, chemicals, toxins and physical objects such as nails and pieces of wire."

As producers examine their pastures, they should be sure to remove hazardous objects that may have been deposited by water, Ward said. If cattle ingest any sharp metal objects that were deposited in the pasture from floodwaters, they can develop a condition called hardware disease. The metal objects get caught in the rumen, where they can poke through the gut lining and pierce the heart or cause massive inflammation in the gut or abdominal cavity, she said.

Also, when inspecting pastures, if perilla mint or water hemlock are identified on the property, producers should ensure that animals do not have access to the plants by fencing off the area, Ward said. She recommended having forage tested for any changes in nutritional contents as producers may need to provide supplements to meet the needs of their cattle.

You can read more about flooding effects on pastures and forages here: https://beef.unl.edu/….

It is also crucial to ensure that all animals are up to date on vaccinations, Ward said.

"To prevent problems from bacterial disease, producers should ensure that cattle are fully vaccinated for blackleg and leptospirosis now," Ward said.

According to specialists at West Virginia University, "Livestock that were exposed to flooded areas during, or immediately after, the flood event should be vaccinated for clostridial diseases, including tetanus. Livestock that were not exposed to flooded areas during the event, but will be placed on a pasture that was previously flooded should also be vaccinated prior to being placed there."

Producers should be aware that some vaccines are proven safe in pregnant cattle, while others are not, Ward said. She advised producers to read vaccine labels carefully before using them. Calves can be vaccinated as early as two months, she said.

DTN Senior Ag Meteorologist Bryce Anderson said that many of those areas hit by floods this spring have a good chance of receiving more flooding through August.

"We've got a mixed rain prospect over the week," Anderson said. "The final round of widespread moderate-to-heavy rain will cover much of the Midwest through Tuesday and Wednesday. The pattern is then going to turn drier and warmer going into the end of June and early July. That should help to dry out pastures and hayfields. But, with all the moisture that we have now, there will be almost daily threats of thunderstorms all the way through at least the first two weeks of July."

Still threatened, producers and farmers are preparing for these future floods.

Ward advised, "Establish a veterinary-client-patient relationship (VCPR) with a cattle veterinarian, develop an emergency action plan with important phone numbers that anyone in the operation can follow, vaccinate animals now to make sure they are protected and have alternative feedstuff sources on standby."

Loren Lindler can be reached at loren.lindler@dtn.com 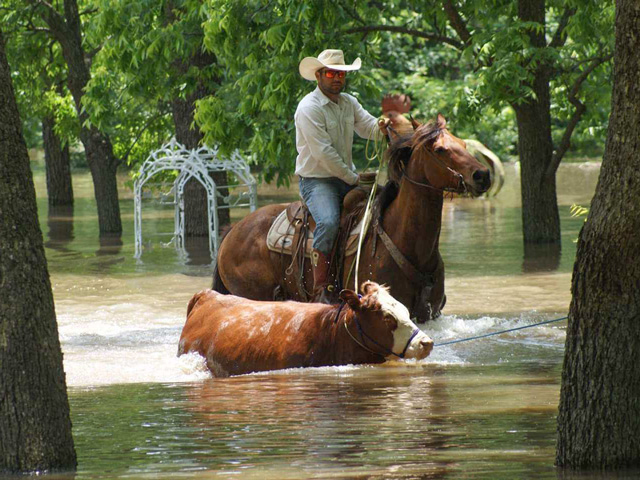