In his role as Texas A&M Extension Veterinarian, Tom Hairgrove visits ranches from one end of Texas to the other. Whether they are Texas-sized or tiny, arid or humid, there's one message he'd like to give all ranchers: Test first, deworm second.

"I'm a proponent of fecal testing before deworming, if possible," he stresses. "Find out what to deworm for and when. The days of treating everything because the grandkids are here that weekend to help work cattle has to change."

Like most things, Hairgrove points out the economic benefits first. Fecal testing, he points out, can save you a pile of money.

"We did a random bunch of fecal tests on one ranch and found out they really didn't have an issue with parasites," he says. Had the rancher just dewormed as a normal course of doing business, he would have spent a lot of unnecessary time and money.

Next, there is the challenge of dewormer resistance. Before the 1960s, Hairgrove says producers had to live with worms. Old treatments were ineffective. First came the phenothiazine dewormers, and parasites became resistant to them. Next were the white dewormers, and, once again, resistance developed. Then in the '70s, levamisole hit the market. And, while Hairgrove describes it as "great," he adds parasites also developed resistance to it.

It took until the 1980s for the true wonder drugs of parasite control, the macrocyclic lactones, to come onto the scene. "We went from nothing to magic," Hairgrove says. "Then, we overused or misused them. We dewormed and re-dewormed, then watched as they didn't work as well."

This is the point where fecal testing comes in. "You don't have to do a fecal test on every cow," Hairgrove explains. "Get a baseline. Then, when you add cattle, you can test them to make sure you aren't adding parasites to your herd."

For example, if you buy replacement heifers rather than raising your own, or when you buy bulls, Hairgrove recommends, prior to mixing them in with your herd, do a fecal test. Then, deworm with the product or products you normally use. Retest in two weeks to find out if your dewormers worked on the parasites they carry. If your deworming program was not effective on the new cattle, you could introduce resistant parasites into the herd.

Next, have a sit-down conversation with your local vet. "He or she will understand the county, the soil types, the forages," Hairgrove says. "On dry, sandy soil, for example, you probably don't have to worry about liver flukes. But, if you're in a swampy area with predominately clay soil, there might be a problem."

Management also comes into play, he notes. "Parasites only climb up the grass 2 inches. If the grass isn't grazed down to nothing, there may not be a problem."

Oakman, Alabama, veterinarian and cattleman Jody Wade agrees with Hairgrove's philosophy. "We have been deworming twice a year, but we may change our thoughts on this. The parasitologists we talked to think we may be deworming too much."

In the past, Wade and his father, Harold, did fecal egg counts yearly but took a two-year break. "Surprisingly, our cows had really low parasite loads, so we gave it a break."

While the calves did have a small parasite problem, Wade says, on the whole, what they found out was the macrocyclic lactones they were using were doing what they are supposed to do.

When they next work their 150-cow commercial herd, Wade says they'll do fecal tests again. If they are low or negative, they'll skip deworming until spring when they apply a lice preventative.

"If we get a heavy egg count, if we're not getting 90%-plus kill, we'll come back in the spring with a macrocyclic lactone and a white dewormer. It is a lot of work to catch the mouths on these old cows, but it has been worth it. That's the beauty of combination deworming."

They'll specifically dose calves and yearling heifers with LongRange when they go out on new grass.

When it comes to getting the fecal samples, Wade recommends either getting your vet or a representative from a pharmaceutical company to do it.

"Boehringer Ingelheim and Merck will do it for you and pay the bill. They are trained to do it," he says.

While finding a manure pile around a cow sounds simple enough, Wade says the accuracy of fecal samples can be quite variable. Dirt and hay can contaminate samples, and fresh samples are a must. He also says the samples need to be shipped the same day, preferably, and not stored in a refrigerator.

Like Hairgrove, he says there is no need to do the whole herd; he uses 10% as a benchmark.

In the meantime, he says they'll continue to dose correctly, use the right products, rotate cattle to fresh pastures frequently—and continue to do those fecal tests on a yearly basis. 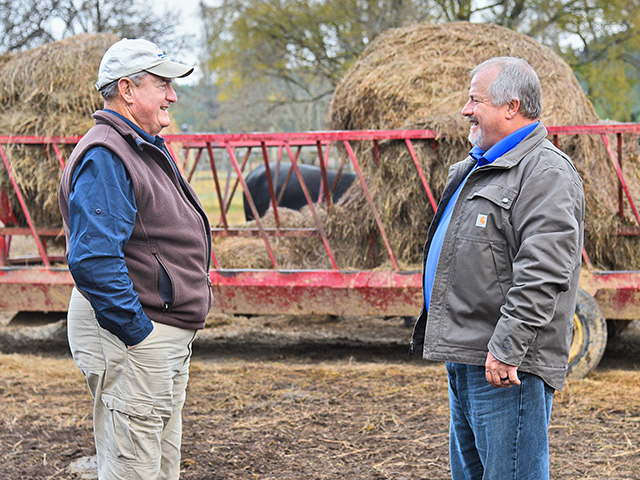