In a voice vote, Farm Bureau added policy opposing the use of the term "meat" for labeling and advertising of all lab-grown and plant-based proteins. Farm Bureau delegates also opposed lab-grown and plant-based products using terms such as "beef," "chicken," "turkey," "lamb," "veal" and "fish" on product labels. Following an amendment added to the language, Farm Bureau also opposes lab-based products using specific cuts in marketing and labels such as "roast," "steak," "ground breast," "chop" and "filet."

"It may just be me, but I think you ought to have a rib before you can have a ribeye," said Ted Kendall, vice president of the Mississippi Farm Bureau.

Farm Bureau's move follows a petition last year by the U.S. Cattlemen's Association to request USDA also restrict lab-grown and plant-based products from using the terms "meat" and "beef" on those protein products. The state of Missouri also implemented a new law this month to prevent lab-grown and plant-based products from using meat or beef on marketing labels. A state lawmaker in Nebraska has introduced similar legislation.

USDA and the Food and Drug Administration this past fall agreed to jointly regulate lab-grown products. Farm Bureau wants to see USDA designated as the day-to-day regulator for oversight. Farm Bureau acknowledges FDA may play a role in determining the product's safety.

Farm Bureau also opposes the use of environmental claims about lab-based proteins that are not verified by USDA.

On trade, Farm Bureau supports continued federal assistance for producers who have been affected by retaliatory tariffs during trade negotiations. Furthermore, to the greatest extent possible, such assistance should be distributed proportionally to all impacted producers. However, Farm Bureau also added language to repeal provisions of Trade Adjustment Assistance law that provides cash and other aid for workers who lose their jobs or have work hours cut due to imports.

The group supports re-entry of the U.S. into the Comprehensive and Progressive Agreement for the Trans-Pacific Partnership.

The group also wants to encourage the Trump administration to limit trade disruptions and resolve trade disputes through negotiations, not tariffs or withdrawals from other trade agreement discussions. That led to a debate over whether the U.S. should limit the tools used to force trade partners to negotiate.

Randy Veach, president of the Arkansas Farm Bureau, said the U.S. shouldn't tie its hands when it comes to trade negotiations. "We need every arrow we can get in our quiver," he said.

"This statement here puts us on record that we support and are willing to negotiate with anybody, but some negotiating tactics don't work," Hurst said.

Others noted China doesn't follow the rules, and the only way the U.S. is going to get free and fair trade is to put pressure on China. In the end, however, the provision remained.

Another policy added on trade called for the support of "a multinational approach, including WTO (World Trade Organization) action, to pressure China to address unfair trade and business practices, including failure to meet WTO import quotas and obligations; intellectual property theft, and forced technology transfers."

Farm Bureau added language supporting USDA's rule that able-bodied people must be working or participating in a job-training program to qualify for the Supplemental Nutrition Assistance Program. Delegates from New York and California had asked delegates to eliminate that language but were voted down.

A delegate said crop insurance is more accurate and filling out the NASS forms is redundant. But other delegates argued NASS surveys are more than yields, and encompass broader work. An Illinois delegate said farmers in that state are using NASS to work on nutrient-reduction strategies, so NASS is broader than just yield and production.

Despite the visit from President Donald Trump on Monday, Farm Bureau doesn't specifically support a wall on the southern border. The group's policy calls for securing the borders of the U.S. by the most technologically advanced means possible, in a way that has minimal impact on agricultural producers "and justly compensates land owners at fair market value."

The group's policy does include stricter penalties for lawbreakers, both workers and management.

Farm Bureau doesn't want FDA to name farmers publicly during or after a food-safety investigation until a thorough investigation of the farmer, harvester, shipper or marketer has been conducted and the business named publicly has been informed of a public announcement. Entities that cannot sell products should never be named publicly unless it is proven they adulterated the food or product through negligence.

FDA should also alter investigation practices to improve the speed and accuracy of the investigations. FDA's authority to name individuals and entities should be greatly reduced. Further, Farm Bureau wants Congress to enact legislation that allows companies to sue if anyone is adversely affected by an FDA action. 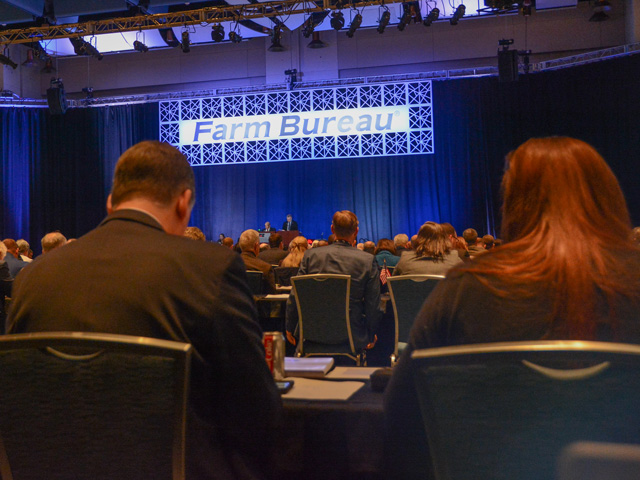